Named for a New Hampshire Secretary of State, Mt Carrigain is not as well known as its Presidential neighbors but remains "one of the competitors for title of finest viewpoint in the White mountains." In fact, from the summit of Mt Carrigain you can see (according to Steve Smith) 43 other New Hampshire 4000-footers, a number equaled only by Mt Washington. Carrigain's height, relative isolation, and distinctive humped shape make it easy to recognize from at least a dozen miles away in any direction. These are also reflected in its high rankings on various peak-bagging lists: 13th-highest mountain in New Hampshire on the AMC list (26th among the Northeast 115), twenty-seventh most prominent peak in New England on the Fifty Finest List and eighth-largest Reduced Spire Measure in the Northeast.

The mountain is thickly wooded, so views are limited until you have almost reached the summit, but patience will be rewarded. An observation tower on the summit gives full 360-degree views, and a short exposed stretch at the top of Signal Ridge is almost as spectacular. 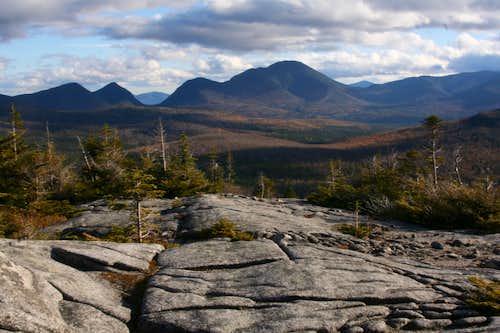 Carrigain from the north

Except for Mt Hancock just to the west, the mountain is fairly isolated, which contributes to the quality of the views. Bond and Bondcliff are about six miles northwest across the Pemigewasset Wilderness; Mt Webster, the southern terminus of the Presidential Range, is nearly eight miles to the north; and Osceola and Tripyramid lie over eight miles to the southwest and south. Chocorua is over twelve miles away to the southeast but clearly visible. The highlight, however, is of course Mount Washington, about fourteen miles to the north but you almost have to be that far to see all of it. On a clear day you can easily spot Camel's Hump over 100km away in Vermont.

There is a well near the summit, at the site of the old fire warden's cabin (to the right of the Signal Ridge trail as you climb). The AMC _White Mountain Guide_ says the water is unsafe to drink without treatment. The well appears to be capped with a hinged lid; I didn't stop to see whether it was padlocked or rusted.

Vose Spur (3,862') extends northeast from the summit into Carrigain Notch. The hump at the far end (nearly a mile from Carrigain's summit) has enough prominence to be considered a separate peak under AMC rules, so Vose Spur is listed among the New England Hundred Highest. For that reason it is bushwhacked each year by a few dedicated peak-baggers, despite its precipitous slopes and dense forest.

"The Captain" (3,540') {photo} is a prominent hump about 0.8 miles southwest of the summit, overlooking Carrigain Pond. Too low to count among the Hundred Highest, it is still of some interest to experienced bushwhackers, and its cliffs are a target for rock climbers insane enough to endure the long approach. 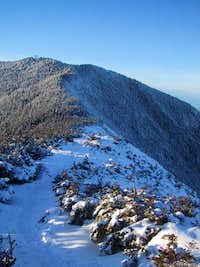 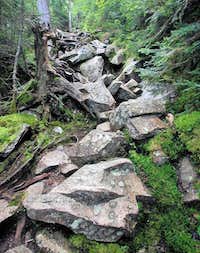 The usual approach is from the trailhead two miles down Sawyer River Rd, which runs southwest from route 302. 302 forms an elbow at the junction with Sawyer River Road. From this junction 302 runs north to Crawford Notch and east toward its intersection with rte 16.

The Signal Ridge Trail provides the easiest route to the summit - a gradual five-mile climb from Sawyer River Road. Watch for the spot at 2.4 miles where the trail turns sharp left away from a brook and a logging trail continues straight - it's not marked except for some neatly stacked branches partially obstructing the logging trail.

The Desolation Trail reaches the summit from the opposite side, with its lower end deep in the Pemigewasset Wilderness. This trail is much steeper than the Signal Ridge trail, especially near the top, and climbs to the summit in just two miles.

The Carrigain Notch Trail connects the previous two into a twelve-mile loop.

A larger loop, including Sawyer River Road and about a mile of route 302, is also possible by using the Nancy Pond Trail.

Parking fees three dollars a day.
There's a deposit-box system for purchasing parking at the trailheads, or you can purchase passes in advance (at a discount) - see links page.

Usual WMNF usage rules. Be aware that the summit marks the southeastern border of the Pemigewasset Wilderness. See links page for complete rules.

Desolation Trail is reported to be difficult in winter conditions, and the trails it joins are infrequently travelled and may be hard to follow, especially in winter.

Nearest established campsite is at Sawyer Pond, a mile and a half from Sawyer River Road in the other direction from the mountain.

Backcountry camping is allowed (subject to restrictions below), though it can be difficult to find a suitable campsite.

In general, you may camp:
Below treeline (where trees are 8 feet or taller).
exception: you may camp above treeline on top of at least two feet of snow (but not in designated wilderness areas, and not over frozen water)
At least 200 feet from the trail and water sources.
At least a quarter of a mile from any road or facility (ie, campsite, platform, shelter, hut).
Additional rules within the Pemi wilderness:
Maximum group size 10 people. No motorized or mechanical transport.
No camping within Crawford Notch State Park (except at Dry River campground).

Complete rules available from links page. Be aware of the Pemigewasset Wilderness Area, and also the Sawyer Pond Scenic Area.

1) Signal Ridge at 4.5 miles offers good views in all directions although summit blocks distant views in that direction 2) White Mountain Guide speaks about trail climbing to col between the twin summits, the W summit is further than the tower summit and about the same height with herd path to campsite halfway 3) Carrigain Pond on the W shoulder is a remote destination, the little knob overlooking it is sometimes called The Captain 4) Carrigain Brook Road referenced in WMG had logging last winter and thus recently upgraded first mile