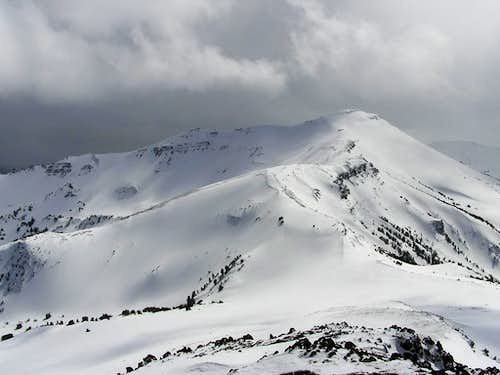 North side of Aneroid from Hidden Peak. Photo by Ronco

At 9702 feet, Aneroid Peak is the ninth (*) highest summit in Oregon (ahead of its neighboring Petes Point and behind Steens Mountain). See: 100_Highest_Peaks_Of_Oregon_List for the fascinating list of 100 highest peaks in Oregon. Located within the Eagle Cap wilderness of northeast Oregon's Wallowa Mountains, it is one of many 9000-footers in the area. Viewed from the East Fork of the Wallowa River Valley, Aneroid looks like a giant cone sitting on top of the valley 'walls'.

When hiking in from Wallowa Lake (East Fork of Wallowa River trail), Aneroid comes into view approximately 1.5 miles into the hike. Routes to the summit are simple hikes in the summer time. However, an ice ax could prove useful when the mountain is snow-covered. There's significant traffic on the approach trail in the summertime, though few of those hikers seem to make the summit attempt. Wintertime generally offers perfect solitude.

The most straightforward approach (in terms of navigation, though a bit steep in places) is to hike in along the East Fork of the Wallowa trail to the meadows directly below Aneroid Lake (about 5.5 miles from TH). From there, you will clearly see a gully directly below the peak - probably a nice steep route with ice ax, crampons, and well-consolidated snow conditions - a dangerous avalanche chute otherwise. The suggested ascent route is to the left of this gully (and to the left of the summit itself).

This interesting page shows Panoramic shots of the Wallowas including a shot of Aneroid from the summit of Pete's Point.

(*) Note that Aneroid's height ranking is based on the indicated list (100_Highest_Peaks_Of_Oregon_List) which, due to its relatively conservative inclusion rules, does not for example contain Matterhorn and possibly many others (considered by most to be distinct mountains). An alternative list places Aneroid in the tenth place (this one includes Matterhorn). Lastly, the third list provides listings for not only Oregon but Washington mountains as well. The latter two lists were provided by Klenke .

Also note that this mountain sometimes goes by the name of Aneroid Peak as opposed to Aneroid Mountain.

From I-84 take the exit for OR 82 in LaGrande, OR. Follow OR 82 eastbound toward Elgin, Enterprise, and Joseph. Continue through the town of Joseph toward Wallowa Lake State Park. You will pass Wallowa Lake on your right - keep going straight past the community of summer cabins to the end of the road (about 3/4 of mile past the lake). Watch out for the numerous deer along this portion of the road and pay attention to the parking regulations at the turn around. The trail starts at the information board on the left hand side and splits into the East (straight, follow the sign for Aneroid Lk.) and West Forks (to the right towards Ice Lk.) of the Wallowa River trails almost immediately thereafter.

The Northwest Forest Pass is required to park at the trailhead ($5/day or $30/year).

In addition, a self-issue, free backcountry permit can be picked up at the trailhead

Dogs are allowed within the Eagle Cap Wilderness - keeping them leashed is required; packing out their waste is strongly encouraged.

A major appeal of this mountain is that it can be climbed year-round without being much harder out of season (i.e. late fall, winter, early spring). 'Best time' to climb, however, is the June-early October time frame. The length of the hike in to the 'base' is the same year-round since the trailhead access road is plowed in winter - snowshoes or skis are highly recommended when the trail is snow-covered. Usual avalanche dangers exist when heavy snowpack is present. 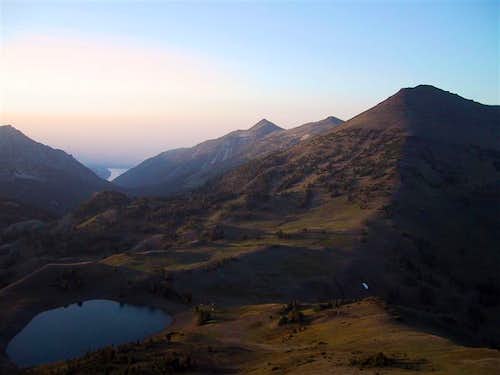 Aneroid and the head of the East Fork Wallowa River. Infected Mushroom photo

Camping at large is allowed within the Eagle Cap Wilderness but is prohibited within 200 feet of streams/lakes. There are several privately owned cabins at Aneroid Lake near the base of the mountain - please keep a 'respectful' distance from those when camping. As always, please apply the leave-no-trace rules.

The Stubborn Mule restaurant in Joseph has excellent 1/2lb burgers - something to look forward to after your conquest of the Wallowas. It's on the main drag through town and on your right hand side when heading BACK towards LaGrande.

Fred Barstad's Hiking Oregon's Eagle Cap Wilderness is an excellent resource. In addition to the standard Falcon hiking route descriptions, the book has a climbing section at the end where the author gives some details for quite a few of the 'big ones' in the Wallowa Mountains, including Aneroid Peak.

Shea Andersen's snowshoeing book - although it mentions Aneroid only in passing (as 'another worthwhile climb' besides Petes Point) - does provide wintertime trail description to Aneroid Lake. Nice book to have for winters in Oregon. 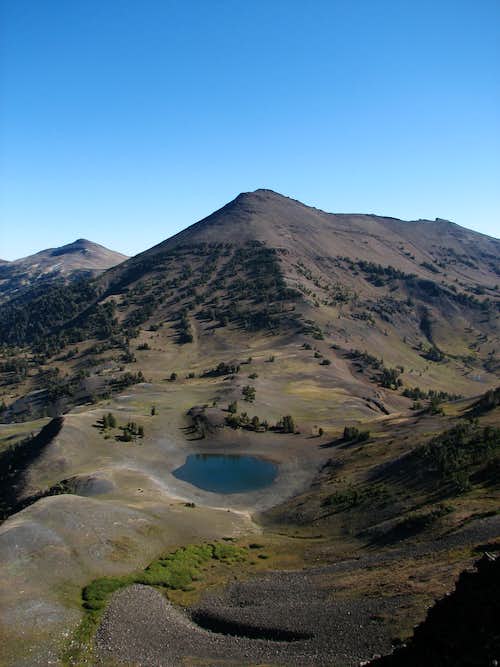 The mountain is actually volcanic in origin.

So, RPC meant to say Aneroid is 'ahead' of Pete's Point but 'behind' Steens Mountain.

I agree with you about the Oregon Top 100 list shortchanging The Matterhorn (9,845 ft +/-), which is considered by many (including my biased self, since I've climbed it and not Sacajewa Peak) to be the highest peak in the Wallowa Mountains. How can a list leave off the highest peak in such a wide region?

And here's another list:
http://www.americasroof.com/highest/or.shtml
On this one, I complained about 10 months ago that Steens Mountain (~9,730 ft) is not on this list. They said they would incorporate it. Well, it looks like all they've done is put it as an note at the top above the list!