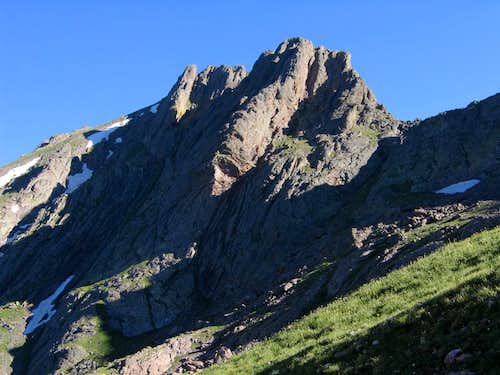 Broken Hand Peak
Broken Hand Peak is Crestone Needle's humble neighbor to the southwest. Because the pass between the peaks shares Broken Hand's name and is used during climbs of the Needle's standard route, the 209th tallest peak in the state will forever be associated with that landmark 14er. After climbing the lovely Broken Hand myself, I find this isn't inappropriate. Surely the highlight of the climb is the mind-blowing perspective you gain on the Needle.

Broken Hand is an easy climb compared to the Needle. With good route-finding, you can keep the difficulty at class 2, but chances are you'll end up scrambling on a section or two. There's more than one way up the peak, but the most popular route heads up the west slopes from about 100' below the west side of Broken Hand Pass. Broken Hand is a fine destination in its own right, but since it shares an approach all the way to 13,100' with the Needle's standard route, combining the two peaks is a sensible choice, as well.

Broken Hand is one of the first mountains to greet hikers and drivers on the South Colony Road. Its steep east face is a brilliant demonstration of the rock strata in the area. When seen from Milwaukee Peak, it becomes clear how it was once one with the Crestones. Its grassy west slopes are much gentler, punctuated here and there by Crestone conglomerate rock formations. Broken Hand is a fitting name because its spire-studded northwest ridge often bears resemblance to a hand. One free-standing pinnacle on the east face in particular is referred to as "The Thumb."

Broken Hand Peak memorializes Thomas "Broken Hand" Fitzpatrick, as true a mountain man as there ever was. Fitzpatrick immigrated to the United States from Ireland, and in 1822 at age 23, he joined an expedition led by William H. Ashley to follow the Missouri River to its source, which they reached in the spring of the following year. By then, Fitzpatrick had earned his reputation as a mountain man, once even saving the entire expedition from an attack by Blackfoot Indians. After the success of the Missouri expedition, Ashley selected Fitzpatrick to lead a journey to discover a new route through the Rocky Mountains. This expedition led to the discovery of South Pass at the south end of Wyoming's Wind River Mountains. In 1826, Fitzpatrick earned his nickname when a musket exploded in his hands, blowing off two of his fingers. The local Nez Perce Indians dubbed him "Broken Hand, Chief of All Mountain Men." Other points of Broken Hand's notoriety include helming expeditions as far west as Fort Vancouver in Washington, scouting portions of the Oregon Trail, and serving as "Indian agent" for John Fremont's expeditions with the more well-known Kit Carson, whom he met in Sante Fe in 1841.

Fitzpatrick's memory is also honored in Wyoming with both Fitzpatrick Peak in the Salt River Range and the Fitzpatrick Wilderness, which encompasses most of the public land east of the Wind River Range's crest. An interesting side-note surrounds the circumstances of Broken Hand's death. Family members of his perpetuated the rumor that he didn't die of pneumonia as the history books tell us, but rather was killed for being sympathetic toward the Indians at a time when the U.S. government was attempting to solve the "Indian problem." Several times, Broken Hand was noted to have attempted to hold the goverment to its treaties with various Indian tribes.

If using the Cottonwood Creek approach to Broken Hand, please respect the landowners' wishes and abide by the following request which is taken from the Crestone Peak page:

From SP member Clyde Lovett: The land we cross to hike along Cottonwood Creek on the way up to Crestone Peak and Crestone Needle belongs to the Manitou Foundation (spirit@manitou.org). I have spoken face to face with these folks about we hikers crossing their land. They request that all hikers check in with them and sign a release form before crossing their land. I have indicated their email address above. Their postal address is PO Box 118; Crestone, CO 81131.

The easiest time to climb Broken Hand is June-October, but this varies year-to-year with the snowpack. In spring or winter conditions especially from the South Colony Lakes side, this route would require an ice axe and crampons to ascend Broken Hand Pass.

Camping is permitted in the Sangre de Cristo Wilderness. Please refer to the "Getting There" section for potential camp sites.

As of 2016, it seems like they're allowing people to use the Cottonwood Creek trail: there is a Forest Service kiosk, and space for a half-dozen cars to park next to the road.

Thanks for the kick in the rear! I'd been meaning to update these...