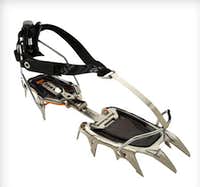 The all new Serac's are available in the pro, clip or strap versions. Spring, 2009.

The Serac is a versatile 12-point crampon with a lightweight stainless steel design. 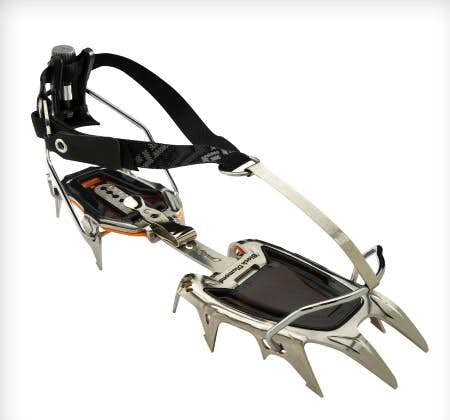 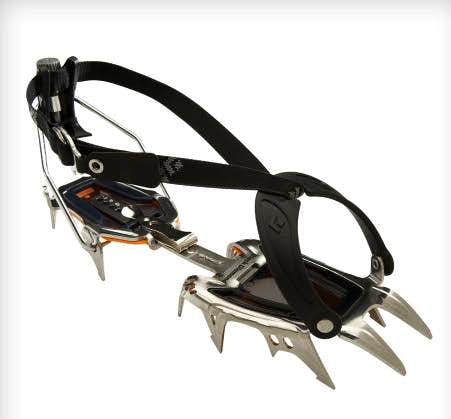 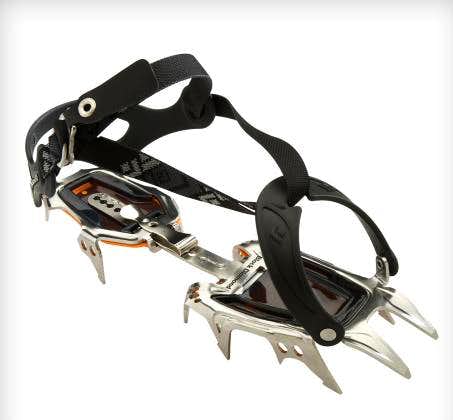 Nasty problem with lever, besides that pretty good
This is the review Black Diamond refuses. It meets their guidelines, but apparently it is too critical, even though I am pretty positive overall. There are some pictures that belong to it, but they can’t be included here.

The Serac Crampon has a nasty problem in the lever. In fact, the same problem probably applies to most Black Diamond crampons, if not all. But whether or not you will notice, depends on your boot.

The problems is caused by the pointy upper ends of the lever. Ideally, the lever would lie flat on the surface of the boot’s back. So that lever should have a concave shape, following the boot. But the Black Diamond lever has a contrary shape. The inner edges of the lever’s sides are pointing INWARD, actually resulting in a convex shape. This get even worse by the end of those sides, which are not very rounded. You can see the original shape on a pair of Neves, which were only used on ski boots.

You may never notice, because it only becomes a problem if you have a relatively soft back on your boot, like when they are made of leather. And that is probably not that uncommon, like on my Scarpa boots.

So what happened? I had taken my new Seracs to the Swiss alps. During the first climb I noticed some pressure on my heels. Afterwards I had severe blisters, which also went bust. I thought it was a problem with my shoes, which were not new, but in good shape.

But at the early morning start of the next climb (only then wearing the crampons again) they were pressing exactly on those blisters, causing a lot of pain. I had to turn around almost immediately, trying to relieve the pain by improvising something between the shoe and the lever. I still not suspected the crampons to be the actual cause of the problem. After half an hour, somewhat relieved, we took off again. But for several reasons, including that loss of time, we had to turn round again.

It was back at the hut I discovered the real cause. If you look at the pictures of my shoes, you see the dents pressed by the levers into both shoes, and into my heels! No wonder I had those blisters.

This is really a very bad thing! Those levers can ruin a whole climbing holiday right at the start! And they almost did.

I was fortunate to be able to work on a better solution. With my pocket knife I could reshape those levers, like they have become on the picture. Not ideal yet, but it made a significant difference and saved my next 2 climbs and the rest of holidays. It only ruined the start of this climb, and I cut my hand (of course).

One advise. Do NOT take the straps out of the lever, like I accidentally did. It is very hard to ever get them back in. For which the strap’s end needs to be very neat, which is another story.

So, a small detail. But it can really cause a lot of trouble. And it really needs to be worked on by Black Diamond, which should not be that hard! Note that those levers are probably on almost every model.

So let’s get to the straps. As usual, I had conservatively shortened those, neatly using an electrical hot knife. I did not want to make them too short, as I wanted to be able to use them on other boots.

But those ends get destroyed anyway. The problem is that there does not seem to be any good way to tuck those ends away, protecting them against their own crampons. The problem is caused by the space which is left by the plastic band on my clip version.

So that’s a request to Black Diamond, to find some way to save to straps. I would not know any yet.

Now on the positive side.

My Seracs got quite some beating. They were used during 3 serious climbs, being on rock most of the time. They survived pretty well. They were also used on steep snow slopes, with varying conditions of snow, and sometimes ice. They served me well, important as some of those slopes had already claimed casualties.

This is my second pair of Black Diamonds. I am still very satisfied with the adjusting system. Also the robust anti clogging plates held well. I cannot tell if those really make a difference though.