A table for the gods themselves, Thousand Lake Mountain guards the western fences of Capitol Reef National Park. From her summit, one can spy the Henry Mountains, Fish Lake Hightop, the Aquarius Plateau, the Tushar Mountains and much of Utah's Wasatch Range. Most striking is the myriad canyons and crevasses to the east. From white and deep crimson to the blackness of shadow, the sun-baked land of Capitol Reef extends in majesty to the far reaches of the horizon.

In autumn, the slopes of Thousand Lake are ablaze as Quaking Aspen turn shades of burnished gold, adding stark contrast to dust and stone. Herds of elk frequent these slopes in the hundreds, grazing on short grasses and forbs. The great stature and majestic beauty of these creatures lend renown to the region as a prime destination for big game hunting.

The mountain itself bears a distinct profile. Likened to its neighbor, the Aquarius Plateau, its crown is utterly flat. Only the summit rises modestly above the lofty tableland. Fondly called "flat top" by local adventurers, the summit stands as a tiny likeness of the mountain itself.

It is rumoured that the name Thousand Lake was bestowed by mistake. The name instead should have gone to what is now called the Aquarius Plateau, which has numerous lakes.

Equal to its beauty is the mountain's solitude. Seldom visited by hikers, it is not a particularly challenging climb, nor is it the Wayne county highpoint. That distinction belongs to Bluebell Knoll, which at 11,317 feet is a mere 11 feet higher.

A place of beauty and isolation, Thousand Lake does not easily pass from the memory of its visitors. Despite its rugged backcountry appeal, it manages to remain a hidden paradise (except for ATV conventions on the east slope).

This high plateau is one of dozens in the wild Fishlake region of south-central Utah. Located in a "transition zone" running southeast to northwest, Thousand Lake rests on the relatively stable foundation of the Colorado Plateau and its extensional tectonic setting. The mountain lies on the eastern margins of the massive Marysvale volcanic pile. At the mountain's summit, volcanic deposits reach a thickness of more than 9,500 feet (3000 meters). Thousand Lake is, without a doubt, one of the highest volcanic plateaus in North America.

Thousand Lakes is ranked #61 in Utah by prominence. 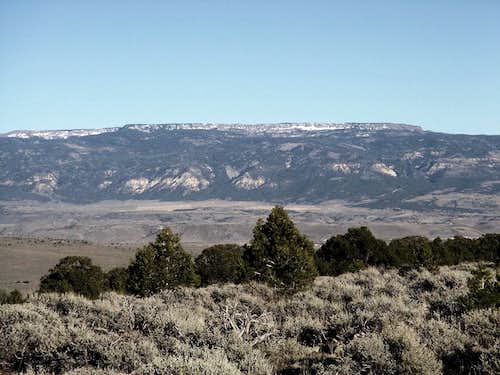 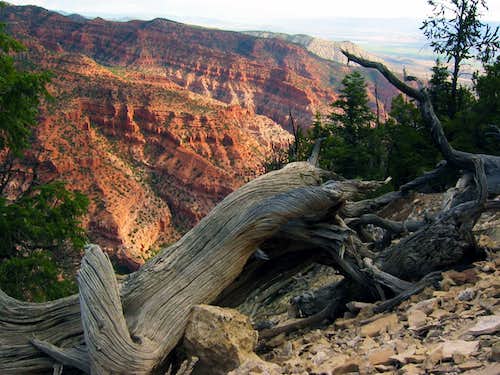 From I-70 take exit 119 in Richfield. Follow 119 east through the town of Glenwood and up to the junction with Highway 24. Take 24 south past Koosharem Reservoir on into the hamlet of Loa.

Drive south on 206 past the junction with Cathedral Valley Road (stay right). Continue to Elkhorn Campground. From there it's about 2.5 miles to the trailhead, which is located just before Deep Creek Lake. See Dean's route description here.

Thousand Lake Mountain is located in Fishlake National Forest. No permits are necessary unless you want to cut firewood.

Dispersed camping areas are located in various places along 206. Some areas just west of 206 - on the mountain's east side - are flat and make for superb backcountry camping. The high tableland near the summit is also ideal. Elkhorn Campground, at 9,300 feet elevation, has six single sites and one group site. Located right on a long stretch of the Great Western Trail, Elkhorn is a great place to catch some solitude in early fall.

To get there from Loa, travel 10 miles on UT-72 (paved). Take the Elkhorn turnoff and travel east for 8 miles. Road is not paved, has sharp turns and rises 1,650 feet in elevation. 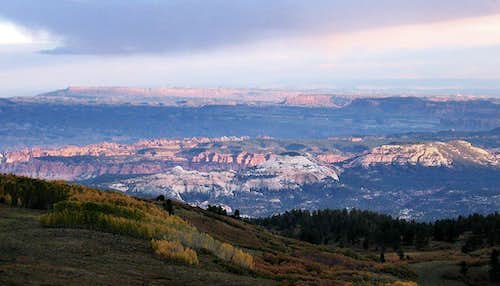 thanks ill check it out!

Corrected lat/long. should be right over actual summit.

Google Maps, Wikipedia, and several other sources name this peak as THOUSAND LAKE (no "s") MOUNTAIN. My initial search on Summitpost yielded no results as I typed lake in the singular form. Any insight? Thanks!