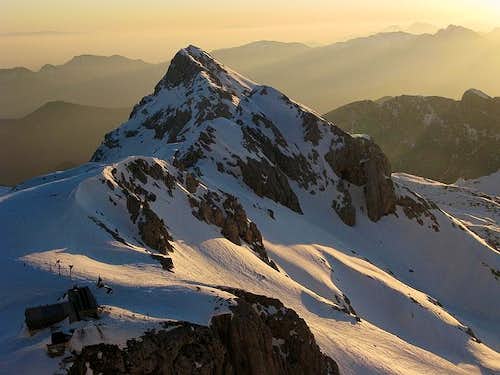 Branko - From the west (from Mali Triglav)

Above the Kot valley

Rjavina (=brown mountain) is a typical Julian Alps giant: a steep rock and scree slope toward the south, a giant vertical north wall and a long, wild ridge, heading in a west-east direction. The mountain is positioned close to Triglav, some 5 kilometers north-east of it. Being so close to the highest and most attracted mountain in the group is a set-back, so on Rjavina you will only rarely meet crowds. But as it belongs to another valley than Triglav, namely to Kot (=corner), visiting its summit is a highly recommendable, independent tour.

Two marked routes ascend the summit. The first one is coming from the upper part of Kot valley, ascending over here not so high north-west wall. The other route is following the harmless western ridge and in the notch below the main summit both routes join.

The north wall is hard to climb, although it is far less popular than the famous Triglav north wall. In fact only a few climbs every year are done here. In last years some more climbing is done also in Rjavina's east walls. Here rock is apparently harder and in Teme (2136m) some modern climbs were done. The east, north-east ridge is very rarely climbed. 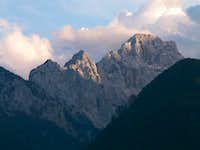 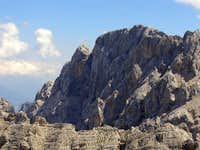 As usual in Julian Alps the north face of Rjavina is most impressive. More than 1000 meters high wall rises above Kot valley. As the valley is ascending towards the SW, so the summits of Rjavina NE ridge are rising. This ridge, one of the wildest in Julian Alps, is called Žaga (The Saw). From below, the first high summit in it is Macesnovec, 1926 m, then comes Dimniki, 2104 m, then Luknja peč;, 2245 m, finally the two-headed Rjavina itself, 2532 m, 2530 m. On the SW, Rjavina massif finishes on Dovška vratca saddle, 2254 m. Over the north wall of Rjavina some hard climbing routes go, and on its western part also a hard ferrata. Besides Rjavina, only the summit of Macesnovec is reachable without climbing. 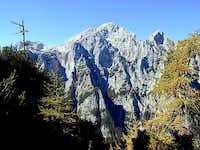 Also Rjavina walls above Krma valley are very high, wild and rocky. Here no easy route goes and besides climbers, who do hard ascents in Teme, 2136m (the side head, below Rjavina), no one ever climbs there. But the very upper part of this wall is passable in an easy climb. Orientation is very hard, passages exposed, but still no harder than degree UIAA II. From the plateau south of the mountain, over Teme and the upper ledges of the eastern face, the NE ridge can be reached and so also the summit of Luknja peč. 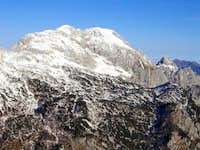 Towards the south, Rjavina sends a more gentle, yet still partly rocky slope. It looks appropriate for the ascent, but as it is logistically inconvenient - far away from trailheads - almost nobody ascends there. The easiest passage is on the very eastern part, actualy from the summit of Teme, where the summit can be reached in a moderately hard scrambling. 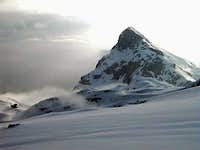 Towards the west Rjavina sends the already mentioned ridge on Dovšm;ka vratca. Many mountaineers are looking this side of the mountain. Namely, from Kredarica hut, where thousands spend night, attempting Triglav ascent, Rjavina is seen as a nice, sharp cone, steeper on its northern side and more gentle on the southern one. 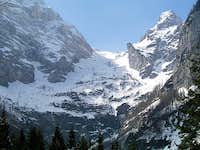 The passage above Kot valley 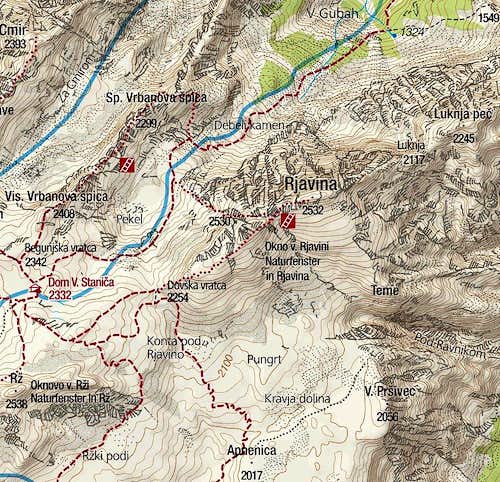 1. Kot route. The trailhead for Kot route starts on a parking place at the end of the valley (Lengarjev rovt). A well marked path leads you through woods, you constantly gain altitude and soon reach open space. The path goes over the slopes on Rjavina side of the valley. In some places slopes are steep, but in summer there are no real difficulties (in winter there's danger of avalanches and sliding). After passing Rjavina north wall we enter the upper part of Kot valley, called Pekel (=Hell, but it's quite a nice place). Landscape is rocky, among boulders even in early summer you can find snow rests. It is here where the Rjavina route deters from the trail to Valentin Stanič hut. You turn left, towards high, steep, red Rjavina NW walls and follow on some places pale, decayed marks. The route climbs over rocks, uses some ledges and brings you on the upper part to a very exposed point where you need to step from one ridge over a wide crack on the other ridge. But the place is well secured with pegs. Later the route turns towards left and reaches the main Rjavina (west) ridge where the route from Stanič hut joins. From here we follow the ridge to the summit. From end of road in Kot some 5 hours.

Above the north wall

2. From Dovška vratca. The other, much easier route starts on Dovška vratca (saddle), 2305 m, where the west ridge of Rjavina begins. We can reach this saddle by marked paths either through Kot valley, through Krma valley or from the nearby Valentin Stanič hut. The summit ascent goes first by a broad ridge, later it becomes more exposed, but we nowhere meet real difficulties. The route is marked and secured with steel ropes and pegs. From Valentin Stanič hut 2 hours.

3. From Teme. For this ascent you must first do the whole ascent through Krma valley, till Pungrt plateau, south of Rjavina summit. There turn right, into the flat Kravja dolina (=valley), and towards the abysses above Krma. A narrow and exposed ledge brings you on Teme, 2136 m, a grassy balcony, one of the most beautiful places in Julian Alps. From Teme ascend directly towards the summit - it's no harder than a scramble, where only occasionally you need to seize rocks. 5-6 hours from Krma.

There is also one special route (not marked, UIAA II), a scrambling and climbing endeavor, which goes from Kot valley to the main Rjavina north-east ridge (below Luknja pec) and from there horizontally over steep eastern slopes on Teme and the plateau above Krma valley (or in the opposite direction). This passage is hard for ordinary mountaineers, orientation is complicated and is used by those lonesome souls who wish to ascent the wild Luknja peč peak. On the plateau north of Teme there are rests of a crashed bombarder from the World War II.

In the north wall of Rjavina and in the southeast wall of Teme there are a few long and hard climbs. If you have more information, please add! Tadej Golob and Borut Kantušer did in 2003 also a first ascent, called Labirint.

The NE ridge (Macesnovec - Dimniki - Luknja peč - Rjavina) is a Grande Course of the UIAA IV- (4a) difficulty. You generally follow the main ridge, searching the best passages.

In late winter and spring ski tours are done from Dovška vratca ridge down to Krma valley. This is one of the classical ski tours in Triglav group, in the past it was so popular that it got the name Triglavski smuk (Triglav ski descent), and was organized by a mountain club. See also the ski tour from Kredarica. You can also ski down through the Kot valley, but there the terrain is harder and in few places requires also good orientation.

From the very summit of Rjavina skiing is much more difficult. It's already considered an alpinistic endeavor. We saw that the SE slope, ending below on Teme balcony, is appropriate for skiing. But the crossing from Teme to the plateau south of Rjavina is very steep and exposed. Its difficulty for skiing is of degree V, that is why also alpinistic skiers usually decide to choose one of the descent variants through the distinct South Ravine, the one which divides the two summits of Rjavina. In the middle of that ravine there is a narrow section. The whole ski descent by the South Ravine is graded with III+ difficulty, if we descend into the ravine from the SE slope, the grading is III. The S slopes of Mala Rjavina (West summit) are more demanding for skiing (IV), the same holds true for the NW slopes of Mala Rjavina(IV-).

The mountain is in Triglav National Parc, so all activities, which could do harm to nature, are prohibited.

End of June till end of October. 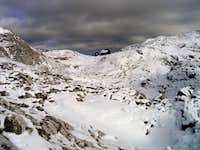 Dom Valentina Staniča, 2332 m. It stands on a broad saddle, rather a plateau below the summit of Visoka Vrbanova špica. Its primary purpose is to support ascents on Triglav, but also other neighbouring summits are attractive enough: Vrbanova špica, 2408 m, Rjavina, Begunjski vrh, 2461 m and Cmir, 2393 m. In spring it can serve also as a starting point of very popular ski tours. The hut is opened from end of June till end of September. It has 111+25 beds and 2 additional beds in winter room. Tel.: (050) 614772. It can be reached by marked paths through all three valleys. The most attractive ascent to the hut is over the wild ridge of Spodnja and Zgornja Vrbanova špica (2299 m and 2408 m) - the route deters from the normal ascent through Kot valley on the altitude of approximately 1970 m, where you turn right. The hut is named after one of the fist true climbers in Alps. Valentin Stanič was Slovenian, who did among other climbs the first ascent on Watzmann and the second ascent on Grossglockner.

Good 30 minutes away from Stanič hut is Kredarica hut, which is bigger, but for the ascent on Rjavina a bit remote.

In Kot valley there is no open mountain hut. But in each of the two other valleys, in Vrata and Krma, there's a hut, supporting mountaineering activities.

In Sava valley you can find some camping places and many hotels and private tourist facilities.