From the almost vertical western and middle part, the huge Triglav north wall gets a bit less steep towards the east. There over the wall even the old hunters passage climbs, hosting today the Prag route. But there the wall doesn't end yet. A mighty rock face continues far towards the E-NE, from Begunjski vrh to Cmir. No usual passage goes over the wall there, but there are also not so many attractive serious climbing routes. Begunjski vrh plays a role of some kind of a balcony, a wonderful lookout point, offering one of the best views on the Triglav, down into the Vrata valley and on the group of Škrlatica on the other side. As from Stanič hut we have only some 30 minutes to reach the summit, it sees many visitors, any time of day and any month of season. Skiing from the very top can release quite some adrenaline in the first section. For Begunjski vrh its west wall is the most characteristic feature. It falls almost vertically on the screes, over which hundreds of Triglav visitors are ascending, arriving from the Vrata valley. Just below the wall there is a true natural miracle - despite compact rocks in the mountain rock layers collect pouring water which also in summer comes on surface as a small water source. That is the famous Begunjski studenec, the only water on the ascent over the Triglav north wall. Nice is also the view on Begunjski vrh from the other side, from Za Cmirom valley. From there it looks like a nice and sharp peak with a quite distinct SE shoulder. Towards the north from Begunjski vrh towards Cmir a distinct ridge runs. It hosts a nice marked, partly secured path. But from that path an easy ascent on top is possible only from Begunjska vratca, so from the southeast. From the saddle north of the summit we would need to climb easily to reach the top.

For the general orientation see the Julian Alps group page and the Triglav subgroup page! For all ascents on Begunjski vrh you drive in one of Triglav Group valleys from Mojstrana - usually in the Vrata. The parking place in the Vrata valley is just before Aljažev dom (hut), while for the ascent through the valley behind Cmir you need to park at Turkov rovt (alpine meadow). The other options to reach the Stanič hut are the Kot valley or the Krma valley. Maps: 1. Planinska zveza Slovenije: Triglav. 1:25000. 2. An even more detailed map is online on SP - here.

The normal ascent goes from the Begunjska vratca (saddle), 2341 m, where Begunjski vrh is attached to the neighbouring ridge of Vrbanove špice. We usually start the ascent at the nearby Stanič hut, 2332 m. See the page of Triglav how to reach there! It's only a few minutes walk on the saddle. Then a good, not too steep, marked path goes in a few turns up the southeast slope. Just to the top it goes over a few easy rocks. On the Swiss Hiking Scale the whole ascent would be graded T3/T2. 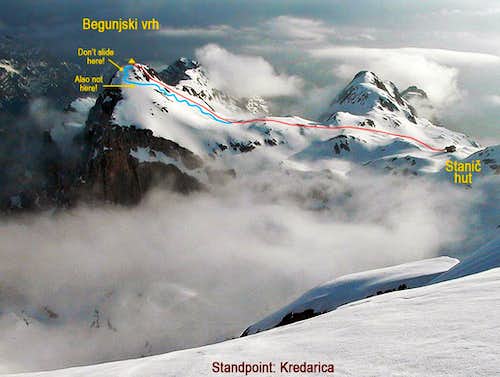 Begunjski vrh from the S

Its difficulty depends on snow conditions. The slope above Begunjska vratca is not too steep and in good snow (it's a SE slope) we easily reach the summit rocks. There we see a nice slope on the left, suitable for skiing. But we know well that below it there is the vertical abyss of the west wall. That's why we automatically continue on top by easy rocks. Now the skiing is ahead of us. The first three turns require really cold blood and an absolute confidence that we'll make them. Sliding there would mean to fall into a deep abyss. We must also judge well the snow quality. It can be more hard, as the slope is quite west oriented. But soon after the first turns short crossing of the slope brings us on the southern side, where all difficulties are over. From Begunjska vratca then the majority skies down by Za Cmirom valley. Although the north-west face is a high rock wall there are no well known harder climbs. Actually over these slopes one of the most frequented marked and secured paths from Vrata to Triglav goes - Tominškova pot (named by a famous climber Stanko Tominšek).

In summer and autumn - the best months are July to October. For weather see here. Even better site is wunderground - here's the direct link to Kredarica station, 2515 m (below Triglav summit).

Camping in Triglav National Parc is prohibited. In Vrata valley there are frequent checks for offenders. Mountain huts in neighbourhood are: