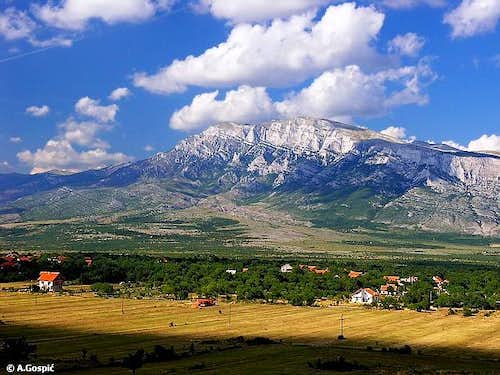 Dinara (1830m) is highest Croatian mountain and summit. Its name is related to Dinara mountain (massif), Dinara group and Dinara summit. Dinara became the symbol for the longest mountain chain on Balkans and gave it its name, The Dinaric Alps, that is stretching from Slovenia, over Croatia, Bosnia & Herzegovina, Monte Negro and ends in Albania.

Dinara mountain is huge massif on the border between Croatia (Dalmatia) and Bosnia Herzegovina, around 100km long, stretching from NW towards SE. Mountain is divided into 4 groups: Ilica (1654m), Dinara (1830m), Troglav (1913m) and Kamesnica (1855m). Last two groups are higher than Dinara but their peaks belong to Bosnia Herzegovina as the border was not drawn on the ridge but some kilometer lower along the slope! Except for the Dinara group rest of the mountain is mostly mix of rock and grass, containing enormous pasture areas, which were extensively used till some 20-30 years ago by thousands of cattle. Some cliffs can be found on the northern sides of Troglav and Konj peaks (highest peak of Kamesnica). Dinara mountain (massif) is also divide between Mediterranean and Continental climate. In the antic times the name for Dinara was Adrion Oros. 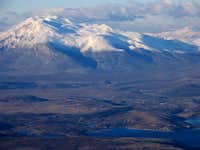 Dinara group is geographically well determined. It is 20km long and 10km wide. On the NW it is divided from Ilica by Derala (965m) road pass (between Knin and Bosansko Grahovo). On the SE Privija (1230m) pass divides it from Troglav group. On the NE is Grahovsko Polje, typical karst field closed by mountains from all sides, which is in Bosnia. On the SW is Knin town, Krcic river valley and Suho Polje field. On the NE edge of the group is beautiful Surdup amphitheater, surrounded by Samogred (1040m), Siljak (1299m) and Orlov Kuk (1126m) rocky peaks which rise above black pine forest.

Dinara or Sinjal (1830m) is highest peak of the group and Croatia. Its volume is amazing, a mountain within mountain. Although absolute height is not very impressive SW face surely is. From its foothills it rises 1400m ending with 700m high cliffs and is some 6km wide. It begins at highest peak and stretches towards SE. Below Osljak (1706m) peak cliffs are highest and then edge of face gradually descents till it melts into the plateau at the foot of the mountain near Glavas village. This is most powerful expression on the whole mountain (massif), which acts like a magnet on sight for anyone who travels by car between Knin and Vrlika. In the face there are few mighty couloirs and the face itself is like enormous staircase. Behind the edge of the face is huge undulating pasture that gradually descends towards NE and amphitheater above Unista village. Despite its beauty and height the face does not attract many climbers, probably because of not so easy access. 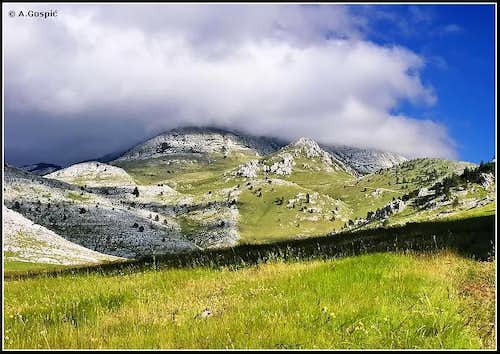 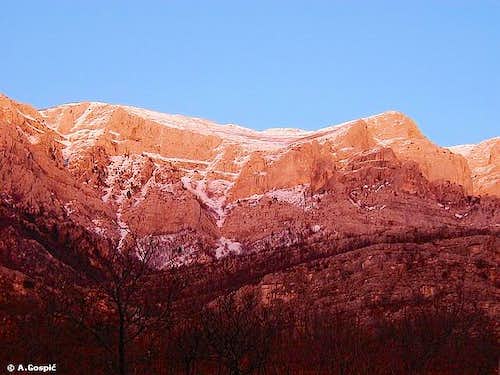 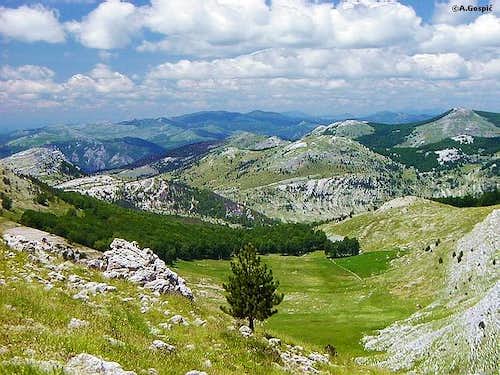 Winter: Despite being relatively close to the Adriatic sea (60km) climate of Dinara is harsh with lot of snow in winter. But the most dangerous factor is Bura wind. With mighty force it brings bitter coldness and unbearable wind-chill effect. Temperatures can drop to -30°C. If the forecast is good all you need is sunglasses and crampons. Ice ax is always good to have but mostly walking sticks will do. Since there are no shelters in the mountain climb must be done in a day and that is problem in mid winter because of the short day.

Summer: Summer on Dinara is hot. There is not much forest to shade you from the sun. Knin, town at the foothills of Dinara is hottest in Croatia. Temperatures easily reach 40°C. But, while the day is hot, even in summer temperatures can easily drop to freezing level during the night. There is no water on the mountain so you have to carry allot.

Dinara can be climbed all year round. It only depends what you prefer. If you don't like either hot or cold May or October are months for you. In May there is so much flowers that it is hard to imagine while in October autumn colors prevail.

Water in the Kingdom of Karst 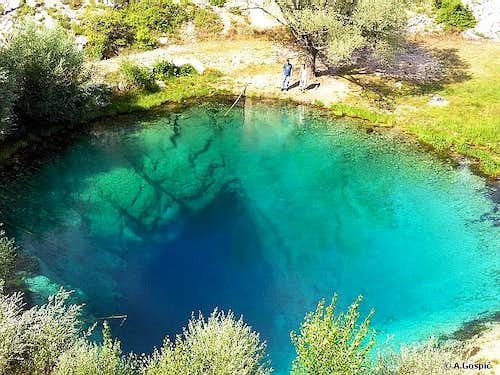 Eye that cries Cetina out

Dinara is formed of limestone and is really the kingdom of karst, below and above the surface. There is not a single water flow on the mountain as thirsty karst terrain swallows it all. Inside the mountain are huge water reservoirs. This water emerges on the surface at the foothills of the mountain in form of strong sources which eject whole rivers at once. There are 3 such sources and 2 of them are of 2 major Dalmatian rivers; Krka and Cetina.

River Krcic emerges on the surface at the foothills of SW face of Dinara (1830m). It flows through 10km long valley, sometimes canyon, which is cut in the foothills of Dinara. Krcic is suitable for kayak, it has quick enough pace and few waterfalls. In summer Krcic can dry out. Pictoresque macadam road follows the river from the very beginning to its very end. Krcic river end spectacularly as it crashes with a thunder that is beautiful 40m high waterfall Topoljski Buk, which falls directly into the source of river Krka at the edge of Knin town!


After a short journey through the Knin field Krka enters its canyon and continues towards the sea. On the journey which is 70km long there are many waterfalls, river lakes while river is mostly in the canyon. All of that were reasons to declare Krka National Park but that is away from Dinara mountain and another story.

Cetina river emerges on the surface at the SE foot of Dinara group near Cetina village at the altitude of 395m and is 105km long. Cetina is one of 4 most beautiful Croatian rivers (other three are also karst beauties Krka, Zrmanja & Krupa). Its source is really amazing. It’s easily described as huge 100m deep, perpendicular chasm filled with crystal clear water. Full strength of river is coming out of it. Walking around the source is somewhat scary as you look down into blue abyss! Little bit further up from the source is entrance into huge Gospodska Pecina cave which contains massive water channels, therefore visit is not possible. To visit source of Cetina turn from main Knin-Split road at Civljane village, signs point ‘Cetina’.
Cetina is also very popular rafting or canoeing river. Lot of agencies organize rafting, here are few links where you can find info and more pictures.

There is no altitude meteo station on Dinara but accurate forecast is not a problem because of Knin town bellow the mountain. To have some idea how things higher in the mountain are you can use Zavizan station on Velebit mountain. Temperatures and snow depth are quite similar. Since Dinara (summit) is some 200+ meters higher than Zavizan temperature would probably be 1-2C lower. 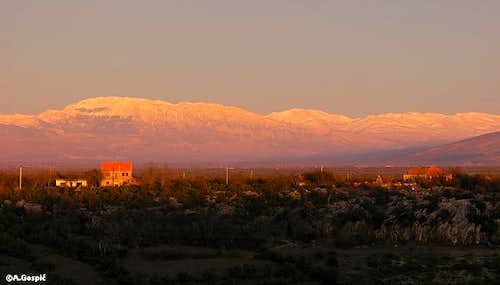 Starting point to visit Dinara mountain is Knin town at its foothills. Knin is important junction of rail and road traffic therefore well connected. How to reach each trailhead is described with a route.

By Plane
If you are coming to Croatia by plane your first destination is certainly Zagreb. From Zagreb there are everyday flights to Zadar (100km from Knin, once a day) and Split (93km from Knin, few times in day). More info about flights find on official site of Croatia Airlines.

By Bus
There are numerous bus lines from Zagreb or Split to Knin each day. From Zadar bus lines are less frequent but also go few times in day. Detailed bus timetables from Zagreb you can find on Zagreb bus station site.

By Train
Knin can be reached by train from Zagreb or Split few times per day. From Zadar train goes less frequently but several times in day. Find more info on Croatian Railways site.

By Car
From Rijeka along the coast:
This route is suitable if you are coming from western Europe, via Trieste (Italy)
Trieste – Rijeka: 70km
Rijeka - Knin (via Starigrad-Paklenica, Obrovac and Gracac): 293km

From Zagreb:
This road is suitable if you are coming from eastern or central Europe via Ljubljana (Slovenia), Maribor (Slovenia) or Budapest (Hungary)
Ljubljana – Zagreb: 138km, Maribor – Zagreb: 113km, Budapest – Zagreb: 347km
Zagreb - Knin (via Plitvice and Gracac): 283km

Brezovac hut, which has been destroyed in 90’s war, has been rebuilt and then reopened in autumn of 2004. Since there are no limitations on Dinara and plenty of meadows and pastures you can place your tent anywhere. Especially convenient are pastures like Brezovac and Duler which are between Brezovac hut and Dinara summit (Knin/Brezovac route).