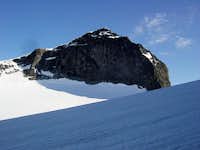 Galdhøpiggen is located in the beautiful Jutunheimen National Park in the Southern half of Norway. It is the highest peak in Norway, Scandinavia, and the Nordic Countries although it is only five metres higher than nearby Glittertind. The mountain is probably the most popular peak to climb in Norway due to its elevation and the fact that it is technically straightforward with no real mountaineering skills required.

For many years, Norwegians did not know that Galdhøpiggen was their highest summit and hence no attempts were made on the summit. This honor was granted to Snøhetta, the highest peak outside the Jutenheimen range, in the Dovrefjell range. In 1844 the geologist and mountaineer, Baltazar Mathias Keilhau, made two unsuccessful attempts to reach the summit of Galdopiggen. On one of these he reached a subsidiary summit to the West of the main summit which he named Keilhaus topp (2,355 m), but the terrible weather forced his company to descend. In 1850 three men from Lom reached the summit, the guide Steinar Sulheim, the local teacher Arnesen and the church warden Flotten. 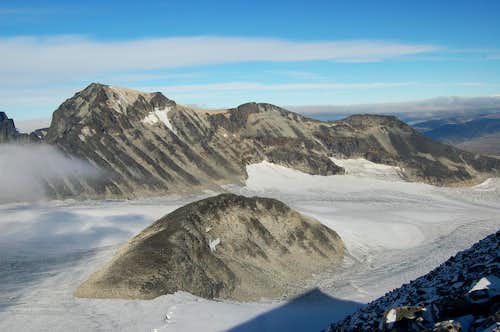 The route from Spiterstulen is a straight forward and non-technical 1400m climb. It takes around four hours to climb Galdhøpiggen with two hours required for descent. The majority of the route is across rock or snow depending on the season. There are some small sections of the glacier to cross close to the summit and crampons may be required, particularly if the ice is exposed. Knowledge of weather and sure-footedness on scree and boulder terrain are the main requirements.

Northern Approach via the Styggebrean Glacier

Another popular route begins at the Juvashytta lodge (altitude 1840m) to the North-East. This is the shortest route to the summit with an ascent of justy 600m, crossing the Styggebrean Glacier. As with nearly any glacier, there may be crevasses and rope is required if there is snow coverage that may conceal these. Having traversed the Styggebrean Glacier the route climbs an easy rocky ridge to the summit. Guides are available at Juvashytta. 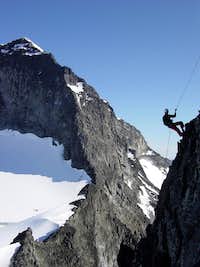 From the Styggebrean Glacier, climb Ymmelstinden (2304m), traverse to Storjuvtinden (2344m), and then continue along the ridge to Galdhøpiggen's summit. This is a classic ridge mountaineering traverse where ropes are required for security. Rated UIAA III.

The mountain lies in the heart of Norway equidistant from Oslo, Bergen and Trondheim. Lom is the gateway town for Jotunheimen. Nor-Way has about five buses a day from Oslo which go via Oslo Gardermoen airport. NSB have trains from Oslo to Otto from where there are connecting buses to make the short ride to Lom. Bus times coordinate with train arrival times. From Oslo take the E6 to Otta (308km) then Road 15 to Lom (64km). From Lom take Highway 55 (Sognefjell Mountain Road) and then turn off for either Spiterstulen, Juvashytta, or Leirvassbu (for Geitsætre). All are sign-posted. In the summer there are buses that travel along Highway 55 between Lom and Sogndal. Out of season you will need your own transport otherwise prepared to hitch (or walk!).

There are is no red tape for climbing in Norway.

The peak falls within the Jotunheimen National Park and you must observe park rules.

There is a 50 Kr fee for cars using either the roads to Spiterstulen or Geitsætre.

Norway is an easy country to visit. Visas are not required for most nationalities but check your embassy if in doubt.

Skiinfo.com has a five day weather forecast and webcam from the ski centre

All 12 months are possible, but few people go in November-February because it´s so dark and cold. Cross-country skiing in the Easter is popular. The summer months are most popular due the temperate weather and longer hours of light.

The mountain is extremely popular and it is not recommended to climb during summer weekends or public holidays if you want to avoid large crowds. 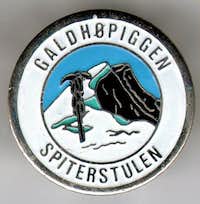 Wild camping is legal in Norway meaning those on a budget can minimise the expensive costs by taking a tent. You are not allowed to camp within 150m of roads or buildings however. In the Spiterstulen area the rule is slightly different. You must either camp on the campsite on the east side of the footbridge (50 Kr per night) or camp over 1km away. Camping within 1km may prompt a visit from Spiterstulen staff to collect a camping fee.

There is no accommodation at Geitsætre.

Suitable maps are easy to purchase in Norway. Most book shops and DNT offices sell maps. The tourist office in Lom can also sell you maps. These are the maps I used but there are others.

The Galdhøpiggen Summer Ski Centre a single ski slope that descends the Juvbreen glacier located near to the Juvasshytta lodge. The ski run is also in close proximity to the summit of Galdhøpiggen. The ski season here lasts between May/June to mid-November. The slope is well suited for Alpine, Telemark and Snowboard. There is a single T-bar lift which climbs from 1850m to 2200m in altitude and 1400m horizontally.

Westcoastpeaks.com has some excellent info and a trip report.

Look at the topographic map for illustration. Hiking and climbing routes are marked according type (glacier, rock, walls...)