Đeravica / Ђеравица (Serbian) or Gjeravica (Albanian) (2656 m), is the highest point of Serbia (Kosovo and Metohija) / Kosova. On 17 February 2008, among many controversies, Kosovo unilaterally declared independence. The decision was not accepted by Serbia.

Alternative Serbian spellings Djeravica or Djerovica and Albanian Gjeravicë (or Maja Gjeravicë) can be also found. The Serbian 'Đ' ('Ђ' in Cyrillic alphabet) and Albanian 'Gj' are pronounced like the English 'J', so the name is approximately pronounced 'Jeravitsa'.

The highest peak of Serbia outside Kosovo is Midžor (2170 m).

Complicated, I know, but nothing is simple in that part of the world!

Đeravica is the second highest peak of Prokletije, with only the Albanian Maja Jezerce (2694 m) being higher. 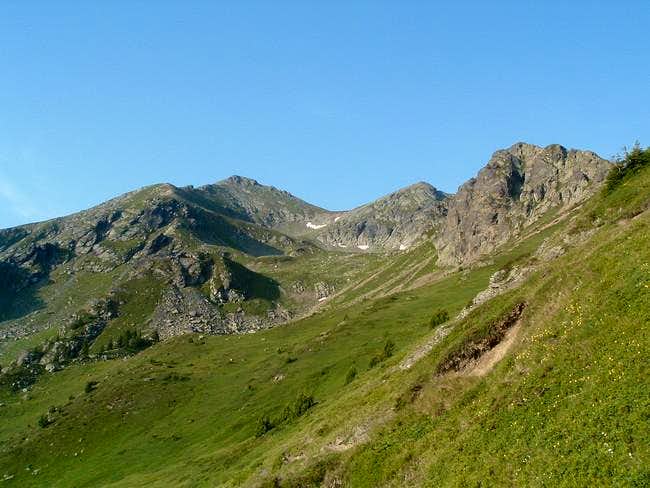 Đeravica is also the most prominent mountain of the eastern part of the Prokletije range, which differs significantly from the western part, being milder, less rocky and more meadowy. It is definitely something for those who like long hikes in remote areas, and those adventurous enough to roam into 'off the beaten track' destinations like Kosovo.

Read the comments in this thread for more interesting info about recent history of the area and visit nuia's photo gallery for more pics.

Some of the closest neighbours of Đeravica are Gusam/Maja Gusanit (2539 m) to SW, Bogdaš (2533 m) to NW and Maja Rops (2503 m), also to NW but closer. From the top there is also a great view towards western Prokletije with Maja Jezerce.

Đeravica and the neighbouring mountains are rarely visited, not due to technical difficulties but because of the popular opinion of Kosovo as a violent and dangerous place. However, my opinion is that you're not gonna find yourself in trouble unless you really ask for it. However, always use your common sense. I have to highlight this, as it is not obvious for many people! :)

Just below Đeravica, a point of interest well worth visiting is the Serbian Orthodox monastery at Visoki Dečani (2 km from Dečani), famous for its medieval frescos.

Useful links about public transport in Serbia and Montenegro (planes, trains, buses) are on Prokletije main page in the section 'Getting There', courtesy of vvujisic.
When travelling to eastern Prokletije you can also consider a flight to Priština/Prishtina, the capital of Kosovo and Metohija/Kosova, if you have any convenient connections.

The usual starting point for this part of Prokletije is the town of Dečani. The nearest bigger town is Peć (Pejë in Albanian), 16 km north of Dečani. Peć is 110 km south-east from Bijelo Polje in Montenegro (train from Belgrade) and 90 km west from Priština/Prishtina. Local bus connections should be available.

By car: if driving from Belgrade, I recommend the road south via Čačak - Kraljevo - Novi Pazar - Montenegrin border - Rožaje - Kosovar border - Peć - Dečani. The road is good all the way, ca. 390 km from Belgrade.

If you approach from the west, the local road Andrijevica - Čakor - Peć/Pejë has been closed by international peace forces between Čakor and Peć, you have to drive via Berane and Rožaje. Hopefully it will be eventually reopened as it is very scenic, although unsurfaced and perhaps a bit bumpy. The Čakor pass (1849 m) is at the Montenegrin side of the border and it can be reached by car from the west by a gravel/dirt road accessible to most passenger cars - it could be a good starting point for a hike to Bogdaš (2533 m).

Kosovo/Kosova does not belong to the 'green card' international car insurance system so you have to buy the Kosovar insurance policy on entry. In 2005 it cost 25 euros for 2 weeks for an ordinary car. It allows multiple entries over this time. As far as I know, in 2007 the insurance price increased to 50 euros for 15 days (70 euros for 30 days).

Some routes in eastern Prokletije, with even more pics:
Đeravica from Visoki Dečani via Kožnjar (marked on the map).
Alternative route to Đeravica, also from Visoki Dečani. Takes a shortcut - worth considering if you're without a car and can't drive up to Kožnjar.
Route to Bogdaš, Đeravica's neighbour. 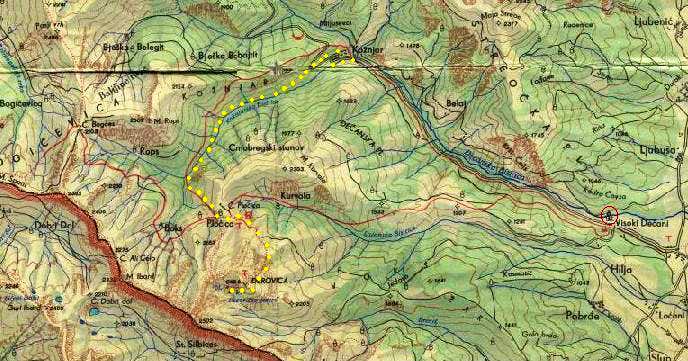 As for summer 2005, you had to register at the UNMIK checkpoint (guarded by Italian soldiers, open only at daytime) to get to Visoki Dečani monastery and further into the mountains. Apparently this presented no problem for foreigners. Because of unstable situation in Kosovo it may change, though.

There are no formal restrictions about camping. Above the treeline there is plenty of space for putting up a tent. We haven't talked to shepherds in that particular area but in general they are very friendly in Kosovo, Albania and Montenegro. Perhaps they wouldn't even mind visitors sleeping in their huts. As far as I know, there aren't any functioning official mountain huts in eastern Prokletije.

Of course, like anywhere in the great wide open, protect the nature and leave the place the way you'd like to find it.

Weather forecast for Prokletije (Plav town in Montenegrin part). Thanks to vvujisic for the link. 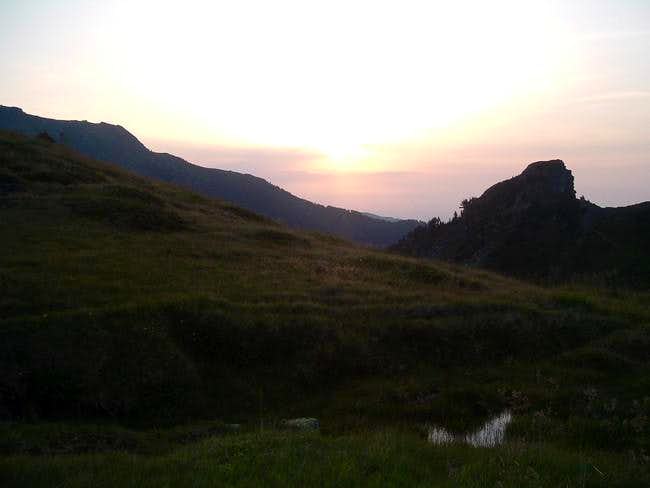 The locals warned us there may still be landmines in the area - go at your own risk.

The SP-er jimorothy wrote here:
'The landmine risk here is very real I assure you. We climbed the peak in 2005 from Junik via the Erenik river. When we got towards the upper part of the mountain we met a large UNMIK mine clearing squad, who were clearing landmines no less than 30 metres from our route. Hopefully the mountain will be clear by now, but mineclearing is not an exact science and great care should be taken.'

However, when we hiked the route from Visoki Dečani in July 2005, shepherds seemed to be freely using the meadows in its vicinity for sheep grazing.

MegasAlexandros added on April 1, 2008:
'According to a KFOR map minefields are mainly present on the western slopes of the mountain range (confirming the report by jimorothy) but this map only depicts minefields which are known to UNMIK/KFOR and also it is not up to date (2005). I was told by locals that the road from Babino polje to Peć was mined during the war and mines are alledgedly still present in the area. I am a bit sceptical but I try to avoid areas where mines could potentially occur. It doesnt matter if someone has assured you if you get unlucky...'

I dedicate this page to Michal (tjalfi) who also wanted to go to Đeravica but I never had a chance to meet him. Just before our planned meeting he tragically died in the Prenj mountains.

The trip wouldn't be possible without Michal's friends, David and Ivoš, my great companions on the Balkan trails.

According to a KFOR map minefields are mainly present on the westerns slopes of the mountain range (confirming the report by jimorothy) but this map only depicts minefields which are known to UNMIK/KFOR and also it is not up to date (2005). I was told by locals that the road from Babino polje to Peć was mined during the war and mines are alledgedly still present in the area. I am a bit sceptical but I try to avoid areas where mines could potentially occur. It doesnt matter if someone has assured you if you get unlucky...

Thanks for the info, I added it to the main page in the 'landmine danger' section. cheers, kamil