Welcome to the Swan Range page

The Swan Range is located in Northwestern Montana. Within its shadow lies portions of the Bob Marshall Wilderness on the east and the fabulous lake filled Seeley/Swan Valley on the west.

The glaciated valleys running off the Swan Range host a plethora of wild animals such as elk, deer, moose, goats, black bear, grizzly bear, wolf as well as mountain lion. They also contain lakes and rivers that provide rewarding fishing for cutthroat trout and bull trout.

Most of the climbing in the Swan Range is demanding and requires frustrating bushwhacks on most approaches. Challenging route finding presents opportunities to hone navigation skills prior to reaching enjoyable ridges that lead to summits that offer rewarding views.

In addition to the Flathead Valley on the northern end of the Swan, three communities are located in the Swan Valley. From north to south along Montana Highway 83 include the community of Swan Lake, Condon and Seeley Lake. All of these communities offer unique opportunities to recreate in the lakes, snowmobile, snowshoe or ski on groomed trails in the winter as well as hunt and camp along the entire length of the range.

One “unique” opportunity exists to “run with the Cheetah Herders”. Every winter the Cheetah Herders have a “Snow Joke Half Marathon” which is a 13.2 mile run on the frozen roads around Seeley Lake, MT. The goal is mid-winter conditioning and a good time. Dogs are allowed to run with their human companions for an additional dollar. The first dog to cross the finish line wins a soup bone!

erhaps a more serious endeavor is the “Le Grizz Ultramarathon” which is always held on the second Saturday of October. This 50 mile ultramarathon starts near the northern end of the Bob Marshall Wilderness and ends near Hungry Horse Dam. The Le Grizz started in 1982 and has a total elevation gain and loss of about 2,000 feet. Each year the Special Olympians assist at the aid stations and $5.00 from each entrance fee goes to Montana Special Olympics. The course record was set by Mark Tarr of Columbia Falls, MT. This guy is an animal! He covered the distance in 5:34:38 in 1996. The Women’s record holder is Bobbie Pomroy who set the Women’s Course record at 6:37:53 in 1985. See the October 11, 2008 Le Grizz Slideshow 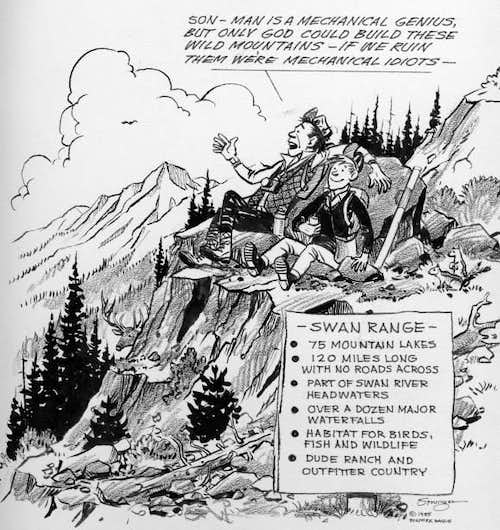 There are at least two theories as to how the Swan Range, Swan River and Swan Lake got their names.

One theory postulates that it was named for Emmett Swan, an early and long time resident.

Another theory is supported by evidence from 1881 that trumpeter swans once lived on Swan Lake. Trumpeter swans might pass through the valley but they normally don’t usually make their home here at this time.

Saintgrizzly adds "It may be of interest to note that several years ago a pair of Trumpeter Swans nested on one of the lakes close to Seeley Lake. The female was killed when she flew into power lines, the male raised the cygnets, and at least the following summer, the family returned to the same lake. That was a couple years ago, and I've not heard one way or the other whether they've returned."

Geographic Boundaries and Getting There 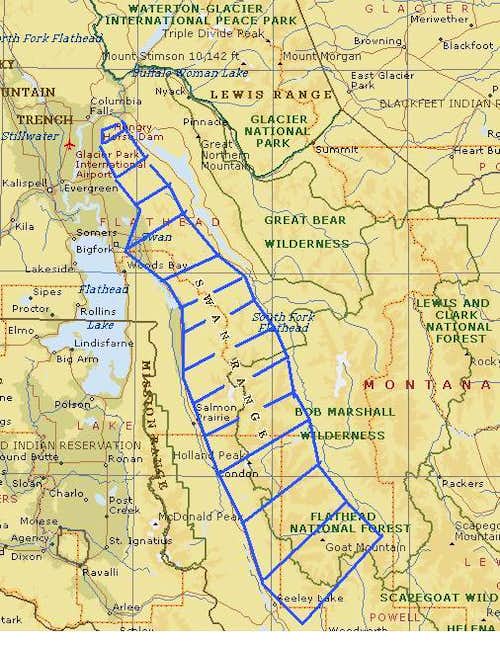 Map of the Swan Range

The Swan Range runs north from the Clearwater Junction area 16 miles south of Seeley Lake, Montana and ends at the northern terminus at Columbia Mountain which is located near Columbia Falls, Montana.

The Swan Range is within eye sight of Montana’s Glacier National Park as well as the incredible Mission Mountains.

For the Southern End of the Swan Range purchase the Seeley Lake map published by the Lolo National Forest.

Another overall useful map for the Swan Range and this entire area is the Bob Marshall, Great Bear, and Scapegoat Wildereness Complex map.

Montana is a long way from most places. That’s why many of us live here.

It is possible to get here by:

By Bus: Northwest Montana is served by bus service.

By Road: The major highways serving northwest Montana include U.S. Highway 2 running east and west and running north to south are U. S. Highway 93 and Montana Highway 83. Highway 83 is called the Swan Highway by the locals and travels down the west side of the Swan Range. There are some fantastic views of both the Swan Range as well as the Mission Range along this road.

Rental cars can be secured in Missoula and in the Flathead Valley at or near both airports. See Car Rentals in Montana. 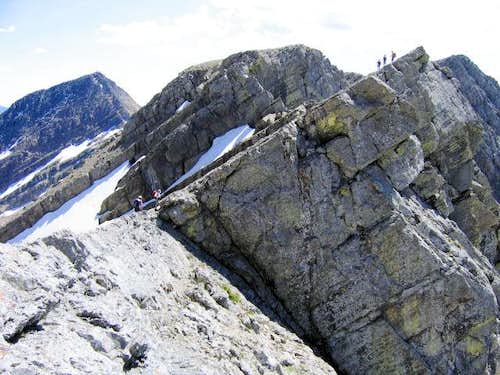 A permit is not needed to camp in the Swan Range. When choosing a campsite find one away from trails, meadows, lakes and streams to reduce your impact on fragile areas. “Leave No Trace” camping and hiking needs to be observed. Do not cut switchbacks and remember to “Pack It In - Pack It Out.”

The NFS recommends the following practices while visiting:
☆ Packing out all trash including cigarette butts
☆ Not shortcutting switchbacks. it leads to erosion and trail damage
☆ Camping and washing at least 200 feet from lakes and streams
☆ Using biodegradable soap
☆ Limiting use of camp fires
☆ Properly disposing of human waste

Check with the local Ranger Station for special restrictions and temporary closures.

From Holland Peak in the southern portion to Strawberry Mountain in the northern portion of the Swan Range the mountains range a total difference of 3,092 feet and almost 50 miles of distance between them.

Strawberry Mountain, the shortest named peak in the range at 6,264 feet, is more of a peak and Holland Peak, the tallest at 9,356 feet, is more of a mountain. It seems the cartographers messed that one up. In fact a lot of the mountains that should be named mountains are actually called peaks.

In addition to the difference in total height also consider that these mountains also rise over 3,000 feet above the surrounding valley floors. This makes for challenging approaches that tend to sear the oxygen out of the lungs and leave the legs feeling like rubber if the climber is not in great physical condition.

Peaks marked with (*) are located in the Jewel Basin Hiking Area and are featured on that page.

Pack String Fording the South Fork of the Flathead River. 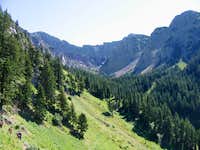 Most trails in the Swan Range tend to travel east and west and are used as thoroughfares from the Swan Valley to the Bob Marshall Wilderness. In days gone by Harry Morgan Rose supported his family by leading his pack string across this range while preparing to guide big game hunters in the Bob Marshall Wilderness. My grandfather guided hunters from all over the United States while my grandmother, Marion, was the camp cook. He spent at least 25 years crossing these mountains with his faithful horse Traveler while leading a string of up to 10 pack horses. My grandmother would join him when she was able. There are incredible tales to tell about 7-point bull elk, killing grouse with a fly rod and grizzly bears in camp but perhaps that is better left for another day.

A spectacular trail, Alpine Trail #7, begins at Columbia Mountain and runs south along the crest of the Swan Range for over 50 miles through incredible alpine areas and past numerous lakes. This trail passes through the Jewel Basin Hiking Area.

If you are lucky enough one of these trails will lead you to an easy approach to the Swan’s peaks.

In most cases, trails are open to a variety of uses and trails managed primarily for one type of use does not mean other types of uses are not accepted. Not all travel types are appropriate on all trails, however, and some trails and areas do have restrictions that you should be aware of before you visit. Check the Flathead National Forest and the Lolo National Forest for travel restrictions in the area you wish to visit.

Trail users encompass all user types, ages, abilities, and interest. Please respect other trail users and be courteous. Remember to share the trail.

Non-stock users yield to stock users. Turn off engines, move off the trail to the downhill side if possible, and greet the riders and stock in a soft voice to let the stock know of your presence and that you aren't a threat.

Most of these lakes in the Swan Range were initially planted from horseback by Forest Service packers in the 1920s and 1930s. There was no understanding the differences between differing sub-species of trout. A cutthroat trout was considered a cutthroat. With the scientific advances fish biologists have identified many different subspecies of cutthroat trout. In Northwestern Montana the Westslope Cutthroat is the native fish and part of its home range has been threatened by plants of other sub-species of cutthroat such as the Yellowstone Cutthroat. There are also strains of rainbow trout that exist in the Swan Range as well. They all bite well up there due to short growing seasons and relatively poor aquatic life such as damsel flies and chronomids.

An excellent article covers some of the history of how trout were planted in Montana’s mountains.

As with all hiking and climbing in Montana and the Swan Range use caution and practice good manners with the wildlife. You are in bear country. Carry bear deterrent spray, don’t hike alone and make some noise. For more information please go to the Glacier National Park's website for Bear Information. The U.S. Forest Service also has helpful information on Grizzly Bear Management.

The alpine meadows abound with wildflowers. 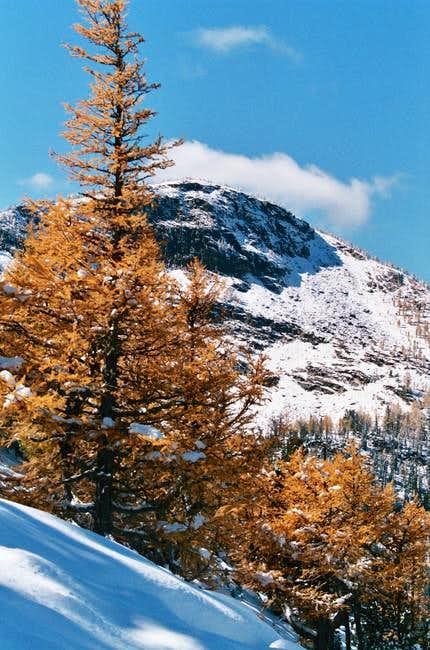 Trees of the Swan Range

While walking through the Swan Range there are LOTS of trees! Sometime it is useful to know the names of trees. For more information see the Federal Forest Services article on Trees of the Swan Range as well as the following information from Wikipedia.

The Swan Range can be accessed throughout the year.

Montana gets its share of interesting weather. In June of 2008 we had over 2” of snow in the Flathead Valley and up to 24” inches of new snow in the high country.

Special Considerations: The rock in Montana is widely varied and it is not unusual to find several different types of rock on any given route. Know your rocks and be certain of your safety. J. Gordon Edwards has an excellent section in his guidebook on rock and climbing safety. Be safe and know your limitations as well as those who are climbing with you. Also refer to the following links for further details: GNP Rock and Grading System and the GMS Climbing Guidelines.

Swan Range Web Cam thanks to MTcutts for the link. 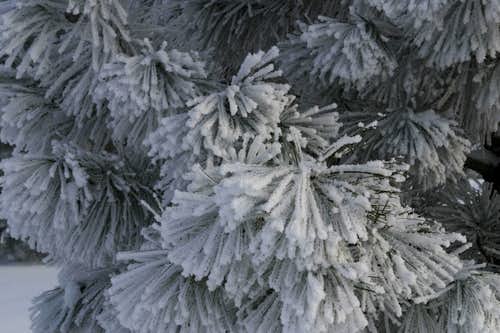 
It is possible to get turned around in the Swan Range. Carry a compass and map and leave a trip itinerary with contacts.

No special equipment is required for trips into the Swan Range. The usual Maps, GPS, Compass, Rescue Flares and Survival Equipment should do the trick. Actually the compass, map and GPS would be especially useful. Other items include sturdy boots and a camera.

An informative article on Fishing Mountain Lakes by John Fraley.

A special "shout out" to the photohiker for his assistance with formating this page. Thanks Mike!