April Peak is a remote peak in the Olympic Mountains of Washington State and is the highpoint of the Dosewallips River - Tunnel Creek divide.  It's remote nature coupled with the fact that it is overshadowed by nearby Mount Constance make it a destination that few seek out.  There is no uncomplicated approach to April Peak as all routes involve some measure of cross country travel through forrested terrain, aka bushwacking.  The most common approach is via the Tunnel Creek Trail although the peak can also be reached via the Lake Constance area and could be a nice adventurous scramble prior to a Mount Constance attempt.  You may like April Peak if you enjoy bushwacking, route finding, scrambling, amazing views of Mount Constance, and solitude!  Make sure you bring a friend or tell someone where you're going, 'cause if you head to April Peak you're almost guaranteed to be the only one on the mountain.  In August of 2013 the summit register, which was placed in 2007, had a total of 8 entries.  One from 2007, one from 2011, five from 2012, and one from 2013.  You can't get much more solitude than that! 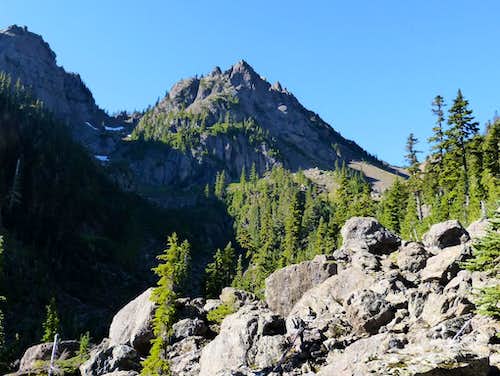 April Peak comes into view after a long bushwack up the Tunnel Creek drainage. The route goes across the boulder and debris field and up the left (east) side to the saddle just east of April Peak.

Take highway 101 to Penny Creek Road (about 1.5 miles south of Quilcene). Head west on Penny Creek Road for 1.5 miles and bear left on Big Quilcene River Road (Forest Road 27). Follow this road for 3 miles and turn left on Forest Road 2740. Continue on FR 2740 for 7 miles to the trailhead. The road is very well marked. Just follow the signs that say Tunnel Creek Trailhead.

The first approximately 3 miles are along the Tunnel Creek trail, a relatively easy trail which gains a mere 1000 feet of elevation.  At the 2.7 mile mark the trail passes the Tunnel Creek Shelter and shortly after that comes to a log bridge.  Here you have 2 options: leave the trail and head through the brush along the north fork of Tunnel Creek heading towards the valley northeast of April Peak, or cross the log bridge and follow the trail up past Harrison Lake up to Valhalla Peak (5345) and then head cross country from there and bushwack your way to the saddle east of April Peak.  The two route options can be combined to make a loop.  I will describe the route this way but the direction can be easily reversed. 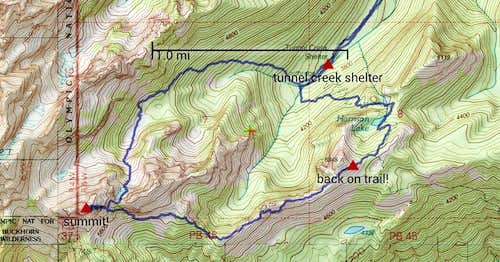 April Peak route options
If you choose to take the north fork of Tunnel Creek route you might want to stay a little closer to the creek than the outlined route here shows.  The topo lines make it appear as though there was a gentler slope which might provide for some easier traveling, but when you're bushwacking you just look for the best route and do your best.  The blue line is where my travels took me.  Once you get to the prominent valley to the northest of April Peak the route emerges from the trees and brush and opens up into a bounder and avalanche debris field.  Cross this field and head up towards the saddle east of April Peak.  There is a snowfield shown on the topo towards the top of the saddle which likely contains snow year round and could prove difficult to cross.  When I was there in late August the snow was solid as ice and not crossable without crampons and an ice axe.  I managed to cross along climber's left of the snowfield by walking the knife edge of the snow moat (angle was nearly flat, slight uphill) while balancing with my hands against a rock wall to my left.  Once above the snowfield, head slightly right and bypass the first large gendarme othewise you'll have to scramble up over it (class 3 with brush complications). 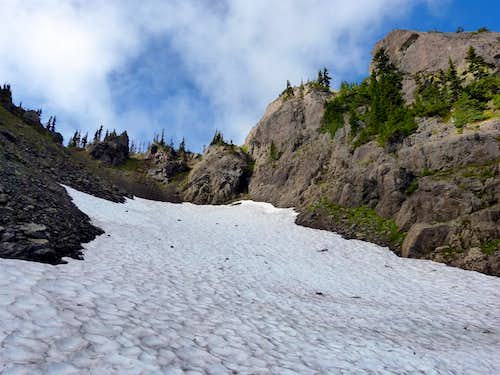 Bypass the first large gendarme on the left to avoid a brushy class 3 scramble over it.
Once at the saddle, head west a short distance until you run into a rock wall.  There are some possible class 5 routes up this rock wall, but instead head left (south) and countour under the wall losing some elevation in the process.  Continue to skirt the rock wall until you see a gully to your right, heading west.  The gully is fairly loose with a sheer class4+ rock wall on the right (north ) and a more rocky wall barrier to the left (south).  Head up this gully until you get above the rock walls, then head slightly left and continue to scramble up to the summit! 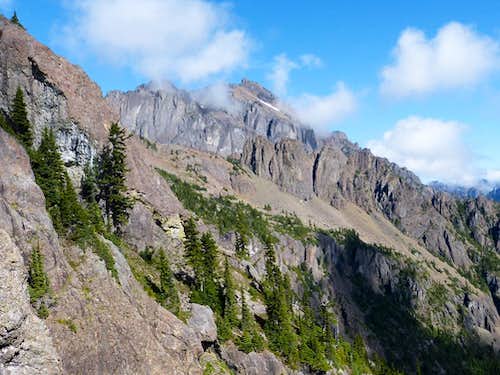 Mount Constance as seen from the saddle to the east of April Peak.

The summit panorama from April Peak. Point 7022 is in the center with Mount Constance is hiding in the clouds to the right. Several other Olympic interior peaks are within view to the left, but obscured by clouds here.
To complete the loop, head back down the gully to the base of the saddle and continue down into the valley below.  Stay somewhat high and travel a short distance below the rocky cliffs of either Lentan or March (not sure) which forms the other side of the saddle east of April Peak.  After you bypass Lentan and March peaks, break off from the ridgeline and head southeast for a stretch to join up with the ridgeline that leads to Valhalla Peak (5345).  You can follow the ridge proper for awhile until you come across a couple rocky gendarmes where you will encounter a cliff.  It might be possible to scramble up and down the cliff bands, but I opted to descend around the cliffs which was some steep brushy "fun".  Once around the gendarmes regain the ridge and the worst is behind you.  Continue up to Valhalla Peak if you wish or instead contour around the peak and you will eventually run into the trail.  Once you are on the trail, just follow it down to 5050 pass, down to Harrison Lake, and down to the log footbridge where you started your loop.  Continue down the trail back to the trailhead. 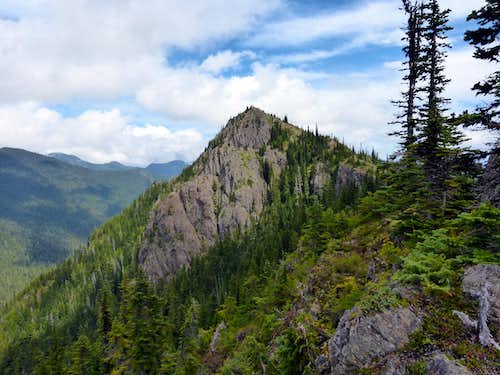 This is most likely a summer/fall hike.  It might be nice in the spring where some snow makes the bushwacking more tolerable, but snowshoes, crampons, and ice axe would likely be necessary.

Camping can be found in the valley to the northest of April Peak and it may be difficult to find a flat spot, I didn't look too hard since I was on a day hike.  Unless you're going to be summiting Mount Counstance as well, you'll likely not need to camp on this one.  You may also camp at Lake Constance if you take a different approach than the one outlined here.

There is no red tape for this hike.  No parking passes, wilderness permits, or anything of the like required for this peak if taking the route described here.

None.  There is very little information of this peak.  It is mentioned in the Olympic Mountains Climbing Guide but other than that not much else is out there.  If you find any other information on this peak let me know!