Viewed from Mount Stone
Although Mount Skokomish is considered by some an unpopular destination, due to rotten rock, it is by far one of the more scenic areas of the Olympic Range. Bordered by alpine lakes and tarns, Mt Skokomish is filled with outstanding views of the interior range, as well as Mount Rainier to the southeast. Dominating the sky when viewed from the north, Mt Skokomish is an impressive massif, comprised of three major summits. Of these, the south peak is the highest. The east peak, however, makes for a nice class 3 climb, but the rock is terribly rotten.


Mount Skokomish is located on the North Fork Skokomish-Hamma Hamma River divide in the southeast portion of Olympic National Park. The summit ridge is the border between the National Park and the National Forest, with the north half being inside the National Park and the southern portion being in the Olympic National forest (Mount Skokomish Wilderness Area). The rock on Mount Skokomish is horribly rotten, and this makes scrambling quite an adventure. Approaching from Lake of the Angels is the most popular and easiest route up Mt Skokomish. But beware of the snow conditions. Snow lingers late and deep on Mt Skokomish's flanks and is very frail and weak. Once the eastern ridge is reached an easy traverse can be made to the summit of the south peak. An easier route is a direct climb up the south peak, which involves less rotten rock.

The views are astounding from the summit, encompassing the Valhallas, Mt Olympus and Chimney Peak/O'neil Pass group to the west, Mt Anderon, Mt Deception and Mt Constance to the north, Mt Stone to the east and Mt Pershing, Mt's Washington/Ellinor and Majestic Mt Cruiser to the south. A host of other Olympic peaks lie in all points between, as well as the countless valleys and ridges one can view.

Avalanche danger is extremely high on Mt Skokomish during the winter and spring months, but anytime is prime time for snow or rock to let loose. Even in August or September avalanches are common. Always keep an eye on the conditions at all times and avoid snow travel as much as possible in the summer months. The loose rock on this mountain make for an even more dangerous avalanche situation.

Mountain Goats often frequent the area. It's not uncommon to see a herd as large as 18 goats roaming around the base of Mt Skokomish in search of salt or fresh veggies. However, one should be aware of these pesky fellows. Their horns are sharp and dangerous, and one should not wander too close or frighten them. 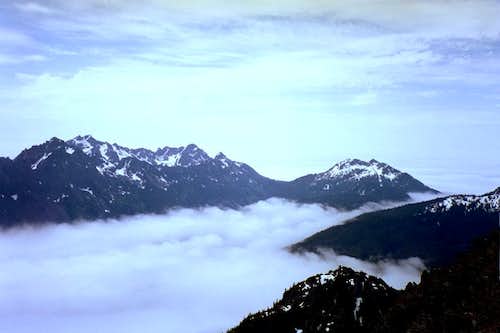 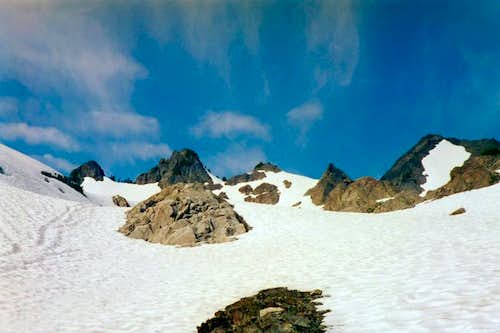 This is the slope on the south east side of Mount Skokomish that you need to cross on the way to the summit (upper right). 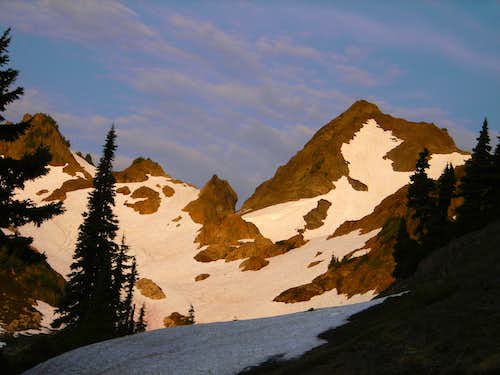 Approaching Skokomish from above Lake of the Angels 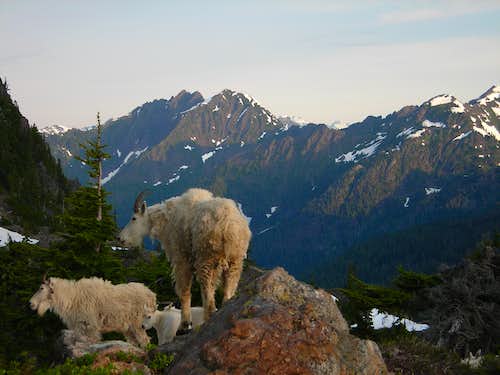 Goats to the east of Mount Skokomish 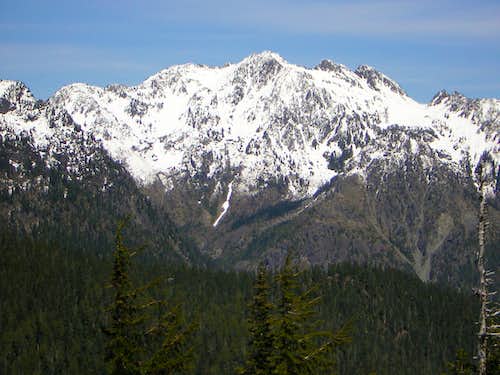 Mount Skokomish viewed from Cub Peak to the south
Route 1: Exit US Hwy 101 at the Hamma Hamma River road. From Hamma Hamma River road take the Putvin trail (12.1 miles from US hwy101). Putvin trailhead is located pass the lower Lena trailhead just after a concrete bridge. It was used as an old logging road for sometimes, so the first mile before the actual trail begins seems a bit "unwild". Once the trail is reached it quickly changes into a wilderness route the last 2.5 miles or so. 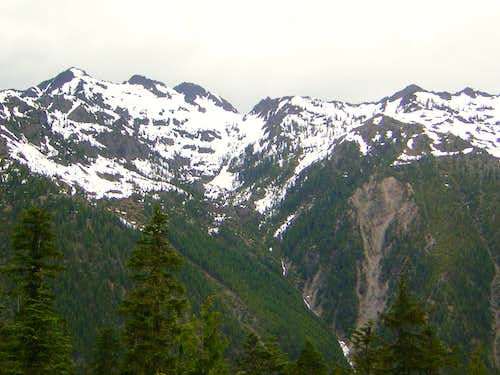 Mt Skokomish and it's summit ridge shows itself across the Hamma Hamma River Valley. Taken from the trail to Mildred Lakes~May 22,2006~ 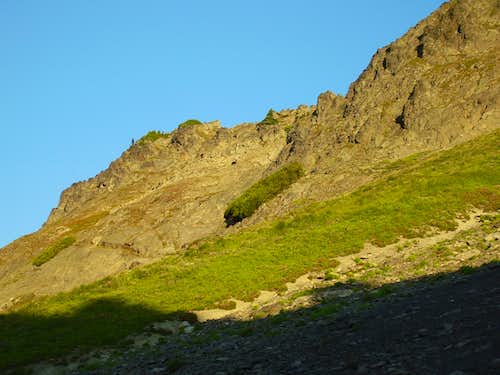 Late Spring or early Summer is probably the best time, do to less scree travel, but the mountain is said to be do-able anytime of year. However Skokomish is notorious for avalanches in winter. The main problem in reaching Mount Skokomish is the steep Putvin trail. There are several headwalls that have to be ascended. In wet weather, or in snowy conditions, this can be very dangerous. It is highly recommended to attempt Skokomish only in pptimal weather conditions. 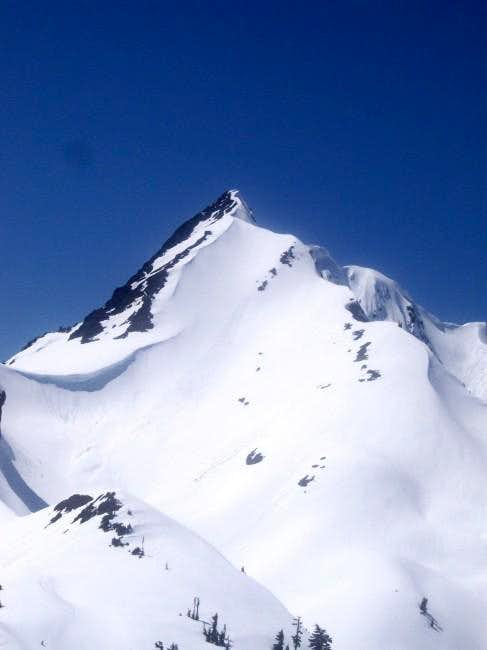 Beautiful angle of Skokomish viewed from near Mt Stone 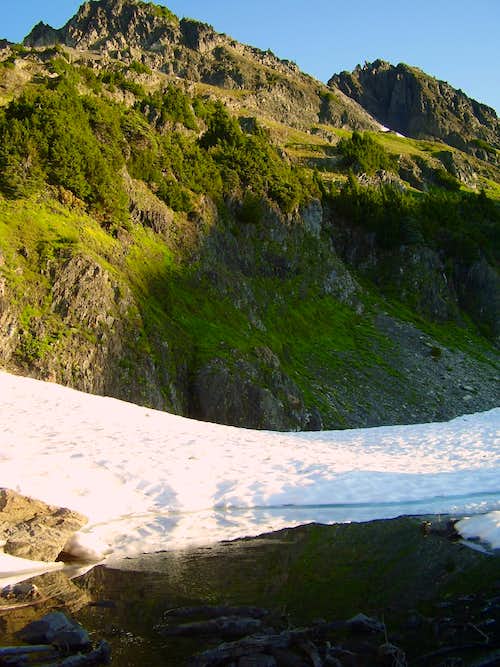 Camping near Mt Skokomish is one of the great experiences one can have on this mtn. Lake of the Angels is an alpine jewel at the east base of Mt Skokomish and is a popular spot for the experienced hiker and climber. Mid-July through early October is prime time for camping there, for the area is genarally covered in snow the rest of the year, since it is at an elevation of 4800 plus feet. 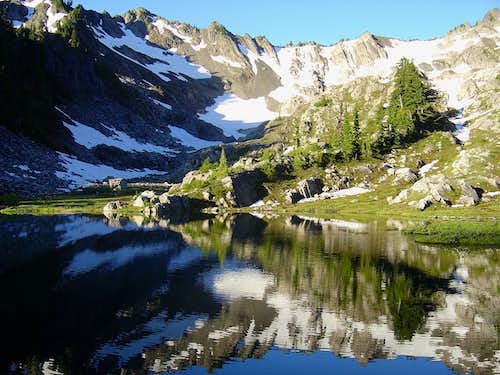 Lake of the Angels, located just to the east of Mt Skokomish


The Glory of Mt Skokomish