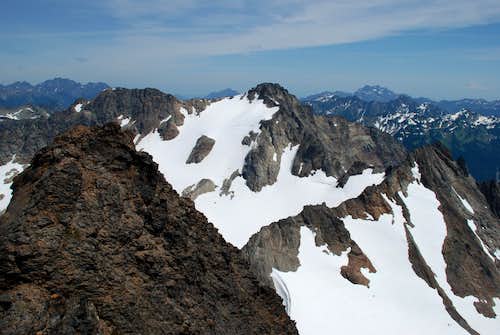 References:
CGOM--Climber's Guide to the Olympic Mountains, by Olympic Mountain Rescue.
OMTG--Olympic Mountains Trail Guide, by Robert F. Wood.
Mt. Anderson is the name of the middle Peak of a large massif located near the center of the Olympic Range. At first glance one wonders why it is not called the East Peak and with the West Peak bearing the directional specifier. The reason is that the real East Peak is so small compared to to the others that it is hardly noticeable. Due to Anderson's central location within the range, it is the hydrographic apex of the Olympics -- its waters flowing west to the pacific (Quinalt River), east to Puget Sound (the Dosewallips River), and north to the Straight of Juan de Fuca (Hayes River) (CGOM, pg 87).

The Anderson massif is one of the most dominating sites in all of Olympic National Park. It is the "Mt Olympus" of the eastern Olympics, for one can view it from nearly any vantage point as the dominant peak in the eastern half of the range. Its bulky summit reaches far into the sky above the evergreen forests, contrasting the two major worlds of the Olympics; timber and ice. To watch a sunrise, or a sunset, on this majestic peak is worth miles upon miles of effort needed to reach such a viewpoint. It is one of the more inspiring peaks of the entire Olympic Range.

The massif has two main summits (the main and West Peak) and a minor summit (Echo Rock) situated between them. When looking at the massif, one wonders why the main peak, which is not as high as the West Peak, isn't simply called the East Peak. The reason is that there is there is an East Peak just east of the main peak, but that it is so dwarfed by the main peak that it is hardly noticeable. The West Peak is distinct enough to warrant a page of its own (hint, hint). The rock is sedimentary unlike its igneous pillow-basalt neighbors to the east. Due to its height, the Mt. Anderson massif has the larges glacier system in this part of the Olympics. 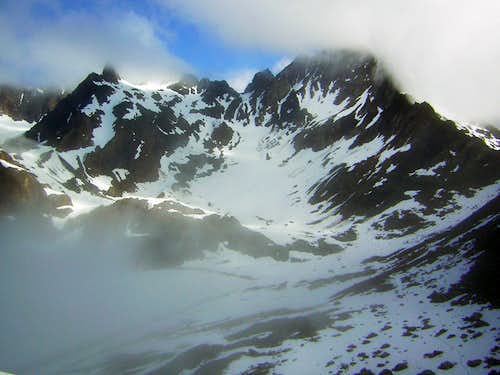 The Anderson Glacier is the dominant southern facing glacier on Mount Anderson. Hanging Glacier is a minute glacier on the eastern end of the peak. The Anderson Glacier has seen some recession in the past years, but with a cooler year it may well gain some of its old self back again. As a result of its shrinking the glacier no longer has any crevasses on it. It has shrunk significantly and, at least according to its appearance in recent photos, may in fact be extinct. The Eel Glacier opposite the col from the Anderson, still clings to life, however. In late summer a bergschrund at its head can be difficult to cross. On the glacier's eastern slopes, huge crevasses must be circumnavigated. 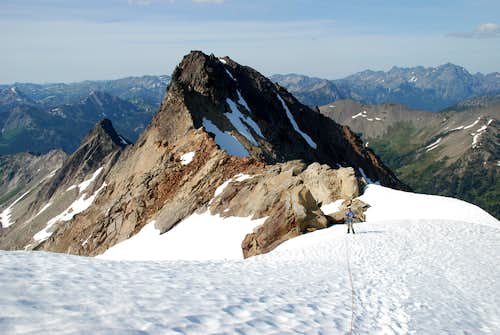 Mt. Anderson is most commonly approached from the west via the West and North Forks of the Dosewallips River. At the north end of the town of Brinnon (large gravel quarry), turn on to the Dosewallips river road (2610). At 10.6 miles, veer right at the Elkhorn Campground. At 12.9 miles the road enters the national park and at 14.7 its end at Muscott Flats where there is a Ranger Station. Here is where the Dosewallips River Trail begins (OMTG, pg. 133).

***Caution*** The road can be very narrow in some spots. One spot in particular is at a bend where the south side of the road immediately drops more than 150 feet to the river below. No second chance if you lose it here! Take your time.

Approaches from the Quinalt (Enchanted Valley) Or Elwha Rivers are too long to be practical unless they are part of a trans-park trip in which you plan to bag a peak or two along the way. Therefore, they are not mentioned here. 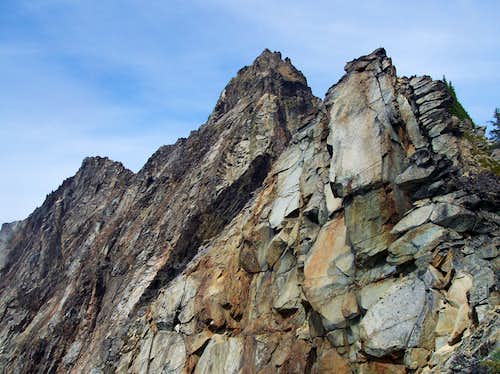 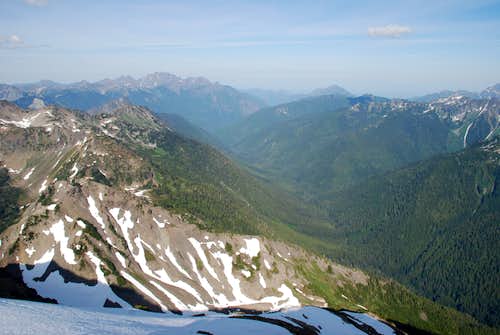 
A wilderness permit is required for all overnight stays within the backcountry. There is a $5 registration fee, plus an additional $2 per night/ per person fee for up to 15 nights (ages 16 and younger exempt). Yearly individual permits can be obtained for $30. 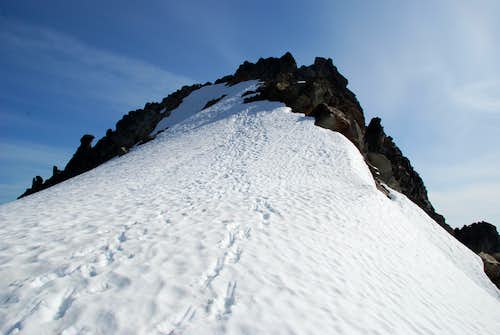 Late May through October is the ideal time to climb Mt. Anderson. Snow lingers well into the summer in the high country, making the approaches quite a bit more arduous -- especially if swollen streams must be crossed. Be prepared for wet weather at all times.

[img:865122:alignleft:small:Honeymoon Meadows]Car camping can be done in the Elkhorn Campground (National Forest) for $10 or at the Dosewallips Campground (ONP Rates range from $8-$16). Both of these sites are currently unaccessible by car due to the washout.

Backcountry camps must be utilized for climbing. These camps are located on the West Fork of the Dosewallips River. Camp Siberia is located 8.3 miles from the trailhead. Limited camping also exists on the moraine of the Anderson Glacier (1.1 miles further) (OMTG, pg 142-143). One can also traverse around the spur on the east to a shelf that overlooks the Dosewallips River.

Check with the park rangers since new restrictions may be in force.

For current conditions call 360-565-3131 or go to the Trail Conditions page for Olympic National Park at http://www.nps.gov/olym/wic/conditions.htm.