Glory of the Olympics


The salt air wafts through the forest, rising higher and higher until at last it touches the sky itself on the spiny crest of Mount Olympus. The Olympic Peninsula of Northwest Washington State is one of the most unique mountain zones on earth. What other ecosystem can boast coastal wilderness, temperate rainforest, glaciated mountain peaks and a rain shadow effect that creates massive diversity?


Home to the Olympic Mountains, the Peninsula varies tremendously in climate from West to East. It is bordered on the west by the Pacific Ocean, on the north by the Strait of Juan de Fuca, on the east by Hood Canal and to the south by the Chehalis River. On the western slopes of the Olympic Range some 200 plus inches of precipitation fall annually, while the Eastern slopes average around 20-30 inches. This creates a variety of plant life hardly seen anywhere else in North America. Occupying the center of the peninsula is Olympic National Park and it's 950,000 plus acres of protected mountain wilderness (95% Wilderness to be exact).


Surrounding this chunk of National Park are five other Wilderness Area Units; Buckhorn (two parts), The Brothers, Mount Skokomish, Wonder Mountain and Colonel Bob areas. Conservation groups are currently pushing for thousands of acres of National Forest to be added to these areas. 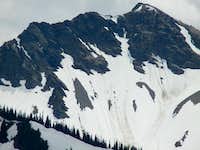 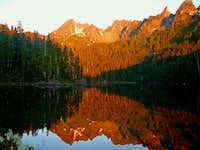 Although not exceptionally high, (Mt Olympus at 7969 feet is the highest point) the Olympic Mountains are steep and rugged. Mount Olympus itself is one of the most prominent peaks in WA state, as well as in North America. It's base barely above sea-level, Olympus is truly an awe inspiring sight when viewed from any point in the range.


Olympus, the king of the Olympic Range has the 3rd largest glacial system in the Continental United States. Mount Olympus also provides some of the most interesting climbing in the range, outside of the Sawtooth Ridge. Major glaciers on Mount Olympus include the White, Blue, Humes, Jeffers, Hoh and Hubert. 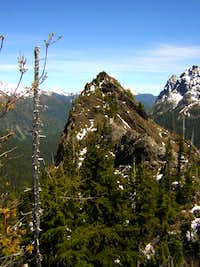 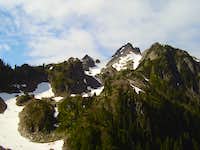 There are also glacial systems on the northern Bailey Range, Mount Anderson Massif, Mt Cameron, McCartney Peak and in the Southwest part of the range on Mt's Delabarre, Queets and Christie. Smaller permanent snowfields and glaciers are scattered throughout the range on Mt Steel, Duckabush and White Mountain. The lowest permanent snowfield, called the Elwha snow-finger, is at 3500 feet in the Elwah Basin. North slopes generally maintain a large ammount of snow well into August and September. Because of this avalanches are a risk here, just as much, if not more than other ranges. 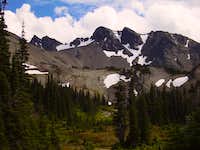 Due to the wetness of Olympic snow, avalanches can occur in any weather conditions. With the looseness of Olympic rock, the increase of Slide Avalanches on slopes also adds to the danger of exploring these mountains. Mt Skokomish is one particular area where weak rock mixed with snow can be a hazard. Always watch for avalanche signs if you are traveling on or near snow in the Olympic Mountains.


With over 600 miles of maintained trails, Olympic National Park provides access to deep mountain wilderness at the cost of breathing the freshest air in the continental US. Not only does the Olympic Range itself have a great number of trails that criss-cross the river valleys and high passes, but the Olympic Coast has a 70 mile trail strip that is the longest preserved section of coastline in the lower 48 states. 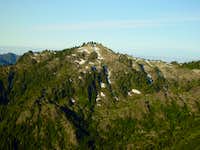 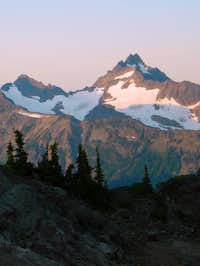 Most trails typically start out close to sea-level and go up major river valleys such as the Quinault, Dosewallips and Elwah. In the case of river valley's, the trails will gradually gain elevation over 10-15 miles (sometimes more or less) before a drastic increase in elevation occurs. However, if one should desire to take one of the many trails to alpine lakes, basins or meadows the elevation is severe! 1300-1600 feet per mile of elevation gain is common for these types of trails (Such as Lake Constance, Wagonwheel Lake or the Putvin Trail). Even the short Lost Pass Trail (.9 miles) from Dose Meadows to Lost Pass gains a quick thousand feet. 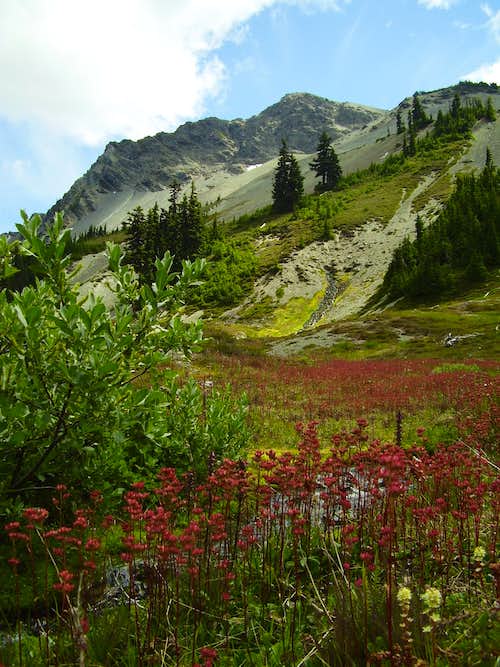 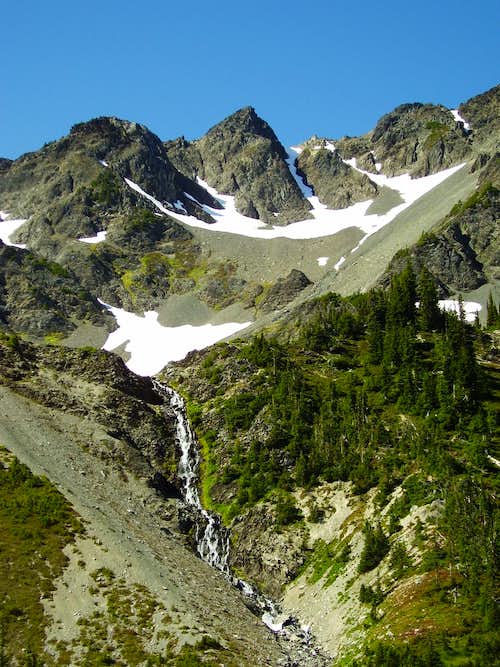 For those who love steep, rugged, primative and remote trails, the Olympics offer dozens of these which lead to hidden gems throughout the range. Some trails, such as several near the Mount Stone or Boulder Lake areas are climbers way trails and should only be followed if you possess good route finding skills and snow traversing skills. Boulder-strewn slopes are often common in these off-trail areas. 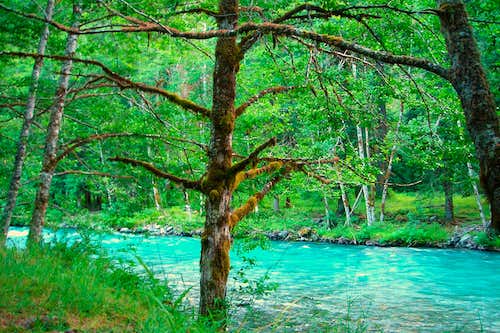 Evening along the Elwha River 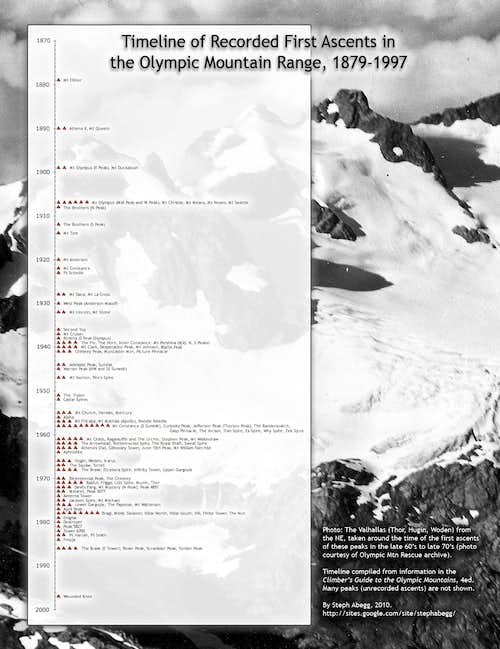 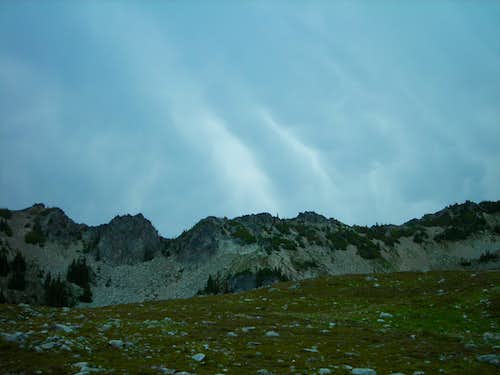 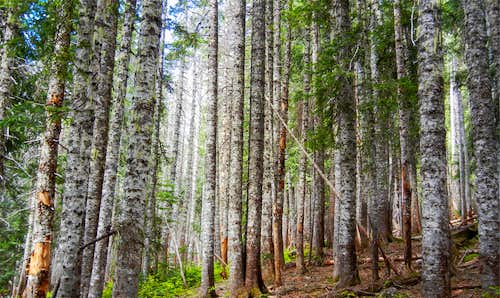 Typical forest along the middle to upper Dosewallips River Valley. The silvery color gives the forest a more haunting look. Definitely more interesting than the plain brownish blacks of Hemlock and Douglas Fir~July 28, 2011~

Olympic National Park, and the surrounding wilderness areas, are disected in a wheel-like formation with rivers. From the larger Elwha, Hoh and Dosewallips drainages to the smaller Goldie, Sam's and Wynoochee drainages, the Olympics have many diverse river valley systems.

The rainshadow affects the northeastern river valleys; the Dungeness, Gray Wolf and Dosewallips. These tend to still have lush growth near the rivers but typically drier slopes, often covered with Douglas Fir and Pacific Madrona. This contrasts with the Quinault and Hoh River systems where thick undergrowth of Devil's Club and other plant varieties clog the slopes to nearly 3,500 feet. 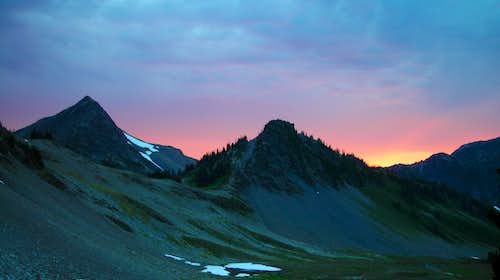 The river valleys range in shape, from deeper U-shaped valleys (Enchanted Valley on the East Fork Quinault River) to more narrow drainages, such as along the Lost and Gray Wolf Rivers. The Elwha and Queets systems have canyons interspersed along their flow, particularly in the upper Queets valley. These valleys are always supplied with an abundance of creeks and lesser rivers that drain the numerous glaciers and snowfields of the range.


It is always best to make a river crossing in the early morning, before the mid-day heat has had a chance to surge the snowmelt down the rivers. Often streams and rivers remain swollen until mid to late August, but it can vary from year to year. One should always check with the local rangers stations about the conditions of fords and other stream crossings before heading out.

The Olympic Mountains truly have some of the most unique weather patterns of any range. With their close proximity to the Pacific Ocean, the Western Olympics have more then their fair share of rain annually. This side of the Olympics is noted for it's temperate rainforests, particularly along the Hoh, Queet's and Quinault Rivers. The Enchanted Valley along the Quinault River is the prime example of temperate rainforest at it's best. Massive cliffs on the west side of the valley are lush with waterfalls and streams that cascade thousands of feet into the glacier carved valley below. It is estimated that between 140-200 inches of precipitation fall on the western slopes of the Olympic Range. Mt Olympus itself can have as much as 20-40 feet of snowfall in a given winter. 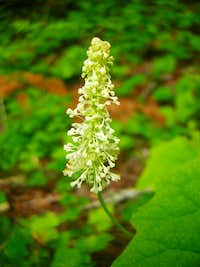 Vanilla Leaf in bloom in the forest understory

This is highly contrasted with the Northeastern section of the Range. An average annual rainfall of 10-20 inches falls on this dryer side. It's almost like a desert mountain ecosystem, instead of a temperate rainforest. The Southeast part of the Olympic Range is a nice mix of the two, and thus has a balance of plant life found in both regions. 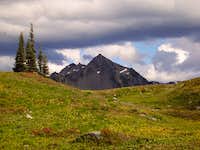 Meadow, full of plant life, in the sub-alpine zone

Due to the high ammounts of rain it is not surprising that several species of trees have the largest of their kind in the Olympic Range. Record Douglas Fir, Western Red Cedar, Western Hemlock, Engelmann Spruce and Alaska Cedar are all found in the Olympic Mountains. These mountains are continually shaped and re-shaped by wind and rain, glacier and snow, and even believe it or not, sunshine! The forests throughout the Range take advantage of the sunlight during the late Spring and Summer months to produce lush vegetation. 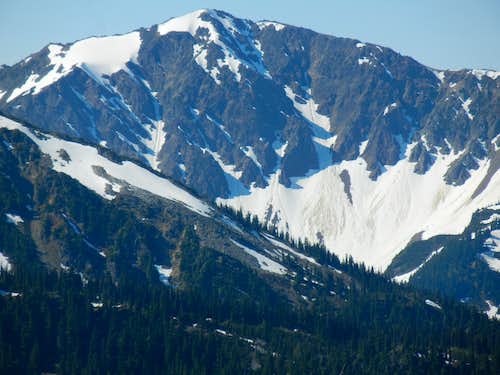 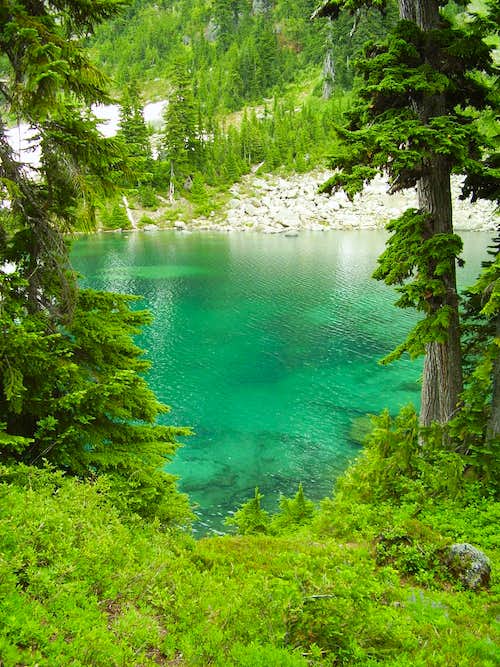 The understory of the typical Olympic forest is full of plants such as Sal-al, Oregon Grape, Vanilla Leaf and Huckleberry, not to mention a host of rare forest Wildflowers. When a tree dies it is not wasted; rather, as it decays it forms what is called a "Nurse Tree", when other plants or tree's grow out of the dead and decaying former tree. Thus a true symbiosis is created and there is a constant cycle of death followed by life.

Because of cool, temperate weather, Hypothermia is a constant danger. The remoteness, ruggedness and steepness of the Olympics makes staying dry all the more important. Make sure and always carry rain gear, even when doing a short day hike. If possible carry extra clothes, and ALWAYS carry the 10 essentials when hiking or mountaineering in these peaks. Weather can change fast, so pay attention to cloud formations to the west. Always show respect for these mountains, for although they are beautiful, they can be a beautiful hazard for the ill-prepared. Staying dry IS the most important key to surviving during cool-wet Olympic weather.

Most Olympic wildflowers are similar to those found in the Cascasde Range. However, varying parts of the range offer unique species found only in the Olympics. The drier and rain-shadowed northeast boasts several kinds of wildflowers found nowhere else on earth.

Common wildflowers one may see often include Magenta Paintbrush, Scarlet Columbine, Avalanche Lily, American Bistort, Arnica and Lupine. Lesser known varieties, such as Pine Drops, Indian-smoke grass or White-bog Orchids can be discovered with careful searching. It only takes a single afternoon in August to realize just how many varieties of flowers can be found in this diverse range.

Photos of the Olympic Range 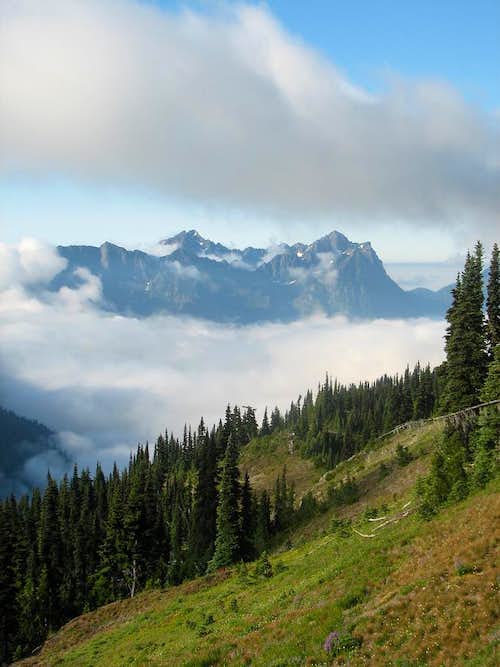 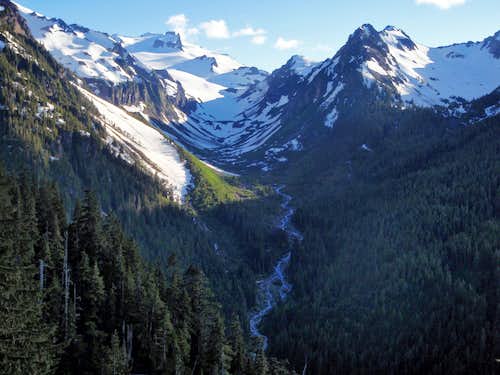 Mount Tom and the White Glacier 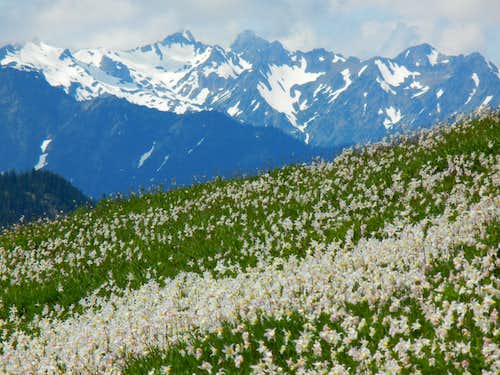 View deep into the Olympics towards the Bailey Range 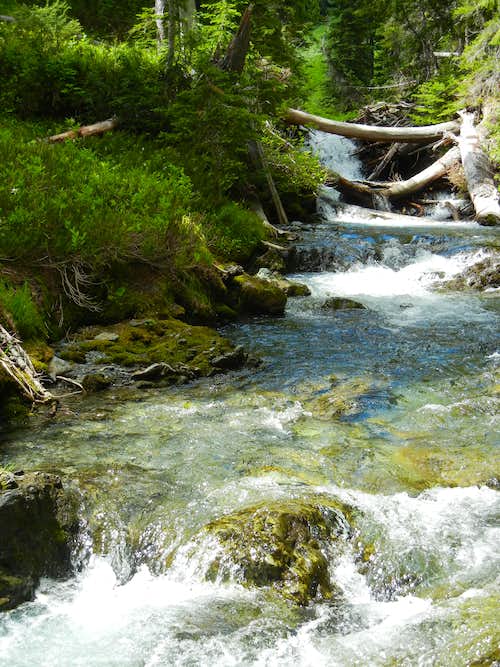 Beautiful cascade along the Dosewallips River 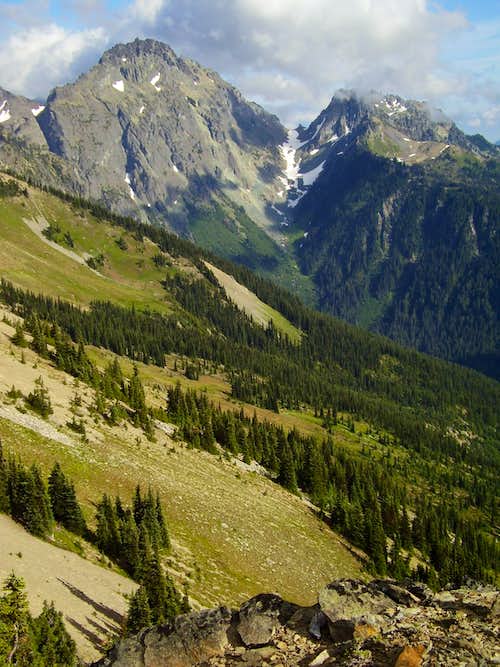 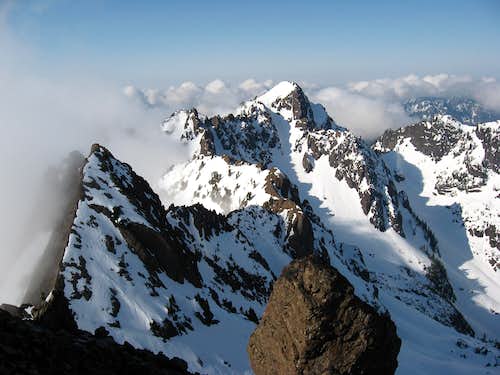 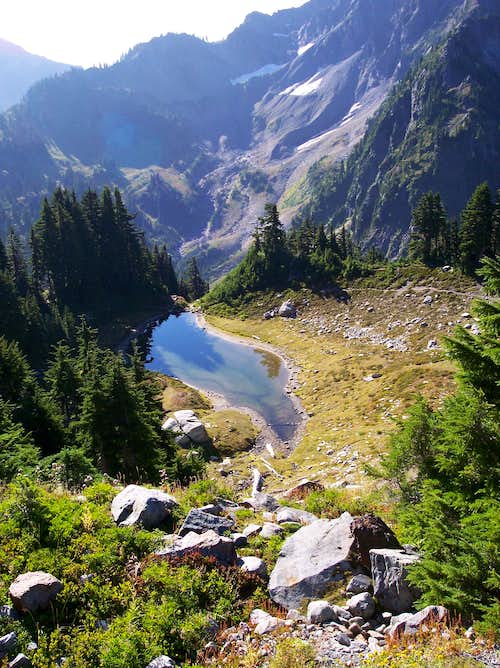 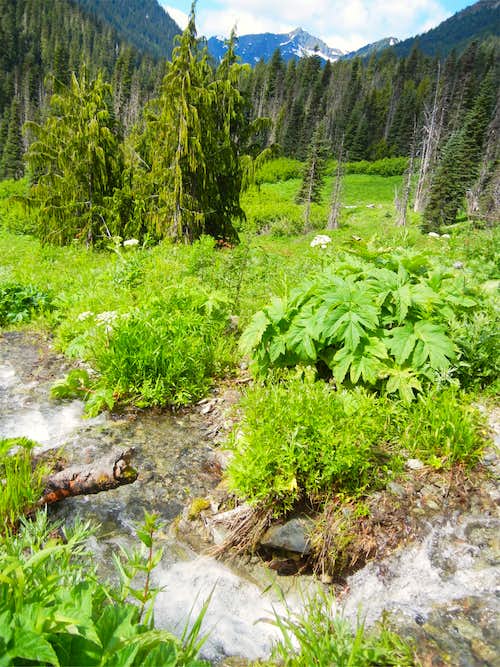 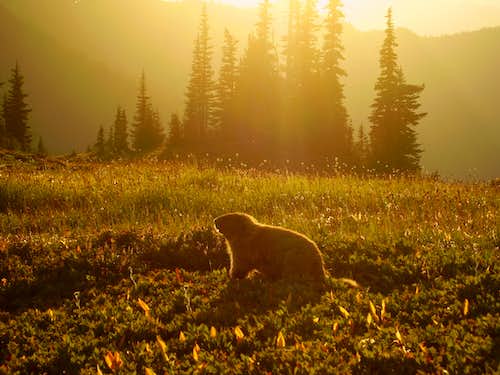 Olympic National Park is home to a thriving community of animal life. Animals you will probably see are the Roosevelt Elk, Black-Tailed Deer, Black Bear, Mountain Goats and Olympic Marmots. There are about 5,000 Roosevelt Elk within the park and surrounding Wilderness Areas. The protection of the Olympic system is much in part to these majestic animals. Theodore Roosevelt set the area aside as a reserve in the early 20th Century. Since then is has moved up in priority to National Monument and finally a National Park.

Animals you probably will only rarely see are Mountain Lions, Mountain Beaver and Golden Eagles. Mountain Lions are North America's big cat and prowl the forests looking for Black-Tailed Deer and rodents. occasionally one can spot signs of the Bobcat as well. The western forests of the Olympic Range offer supreme solitude, as well as great fishing opportunities for these smaller cats.

Gray Wolves once inhabited the park, but were wiped out in the 1930's. There has been recent controversy of bringing the wolves back, but so far no efforts have been made at re-introduction. There's more then enough space to support them, but many factors come into play when deciding to return this carnivorous species.