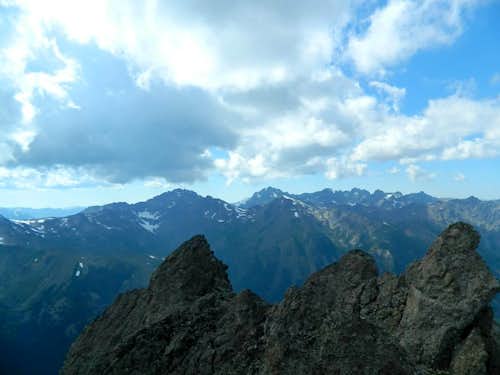 Cloudy Peak does not particularly stand out when compared to the other big boys in its neighborhood, such as Warrior and Constance/Inner Constance. It is, however, somewhat lofty at almost 7,000 feet when compared to most other peaks in the Olympic range. It’s basically a prominent point in the ridge running north-south between Warrior peak and Boulder Ridge. The summit consists of crumbly rock spires jutting up out of the ridge top in all directions, the highest point being a spire about 10 feet high that is easy to shimmy up with just enough room for one person to sit atop. It is a good challenge for the novice climber or someone looking for a fun and easy scramble. The view all around makes it well worth the effort. To the west is the Dungeness Valley and beyond; Mt. Mystery, Little Mystery, Deception, The Needles, and others. Due south is Warrior Peak, with Constance and Inner Constance looming behind, towering and massive. To the East, is the Ridge of Gargoyles, Alphabet Ridge, and foothills dropping down into Puget Sound basin with The Cascades in the far distance. The hazy smudge of Seattle can be glimpsed as well. Below the north side of the peak, the sapphire gem of upper Charlia Lake is visible, with Marmot Pass, Mt. Buckhorn and Iron Mountain beyond.

The upper Dungeness trail (trail#833 via forest road 2860) gets you there the quickest. Follow the trail, which is a very pleasant hike along the Dungeness River, about 6 miles to the Boulder Shelter. A few hundred yards up into the trees past the shelter, you will come to an unmarked but well used way trail branching off to the left. This is the Charlia Lakes way trail that leads up to Charlia saddle (less than 2 miles) and then drops about a thousand feet to the lakes. The trail is getting brushy along the first mile, but is easy to follow. The entire approach up the Dungeness and Charlia trails are in the Buckhorn Wilderness, but the peak itself is located just inside the national park boundary. Another approach for the adventurous would be to bushwhack up the north fork of Tunnel creek to Charlia lakes and up to the saddle. It’s also possible to approach via the Dosewalips River trail over Constance Pass and Home Lake, then down the Upper Dungeness to the Charlia way trail, but this way is considerably longer due to the road washout on the Dosewalips. Another entry/exit point would be the Tubal Cain Trail, which is accessible by driving a few miles beyond the upper Dungeness trailhead on road 2860. This would be a good route for someone having the time and inclination to do a longer loop. From the Boulder shelter, one can take the junction up to Marmot Pass, and then out the Tubal Cain (or the Quilicene, for another possibility) returning to the upper Dungeness trailhead via walking the road. (or reverse) 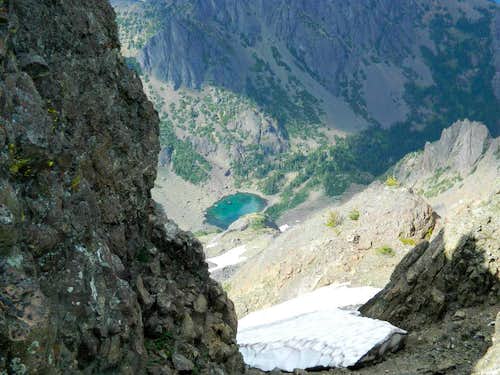 North from Cloudy
The Charlia way trail switchbacks up through beautiful patches of lupine and paintbrush, with impressive views to the south of Inner Constance and Del Monte Ridge. For the final vertical hundred feet, the switchbacks end and the route simply heads straight up the slope, the tread wearing away in some spots. It skirts to the right of a massive rock jutting up, an interesting terrain feature, and then crests onto the top of the saddle.(Climbers who are into bouldering might find the huge rock more enticing than the climb up to Cloudy Peak) To climb Cloudy, proceed to the right (south) from the saddle over talus and scree, straight up along the steep ridge which leads directly to the summit. The guide book classifies this as a grade 2 and that’s accurate. When I climbed this route in early August there was a snowfield for the final 200 feet or so which was frozen solid and very steep at the top. (the top of the snowfield is visible in the pic above) I avoided it by maneuvering left to a short and narrow, but very deteriorated couloir. Its possible to cross the couloir to a kitty litter scree slope. Just above is the level bench of the summit with rock spires poking up. The tallest spire is easily accessible and has a summit register on top. (It should be noted that its possible to approach Warrior Peak from the summit of Cloudy by moving south along the ridge between the two peaks.) 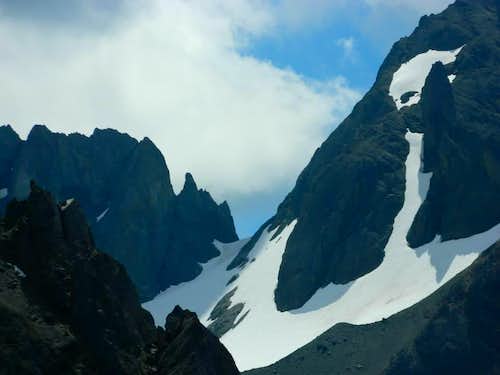 To park at the Upper Dungeness trailhead you need a forest pass. If you camp at Home Lake you need a backcountry permit. (see below)

Climb when you want to! But obviously, summer and fall would make for the least complications.

Boulder shelter is a fairly pleasant spot to camp and it does not require any type of registering or permit. There is also a camp with room for one or two tents next to a small tarn below on the west side of the Charlia saddle. Or, one can descend from the saddle to Charlia Lakes and camp there. The saddle itself would make a fine camp if you don't want to descend to the lakes (Its steep), supposing snow is available for water. These camps are also located in the Buckhorn Wilderness and do not require a permit. (It should be noted that only the small, upper lake is visible from the saddle. The lower and larger of the two is below and out of sight in the timber.) Home Lake is 4 miles beyond the Boulder shelter and a beautiful spot to camp with a spectacular view of Inner Constance and Warrior Peak. It is within the National Park though, and you need a backcountry permit from the W.I.C. in Port Angeles. 360-565-3131

Good. All the numbers are correct, but you must include the negative symbol as well or the peak shows up located in China.

Negative symbol added. Cloudy peak has joined the others.