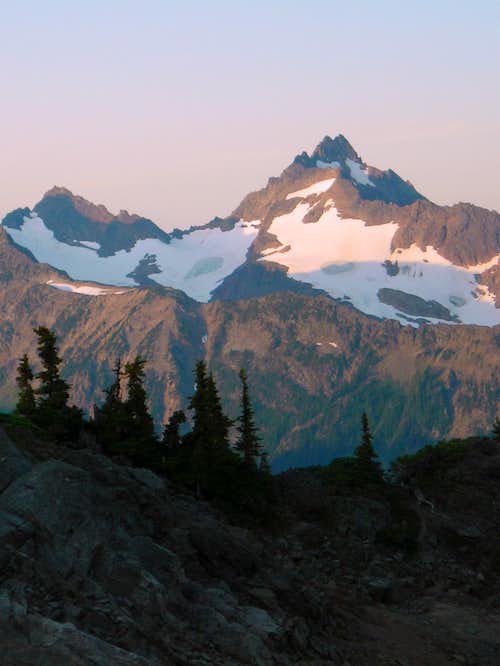 West Peak is located on the Anderson Massif in Olympic National Park and is the highest point of the massif. It is much less climbed than its neighbor, Mount Anderson (7321) but it has a rugged beauty all its own. It is surely one of the more secluded peaks in the entire Olympic range. To truly understand the remoteness all one has to do is see the many mountains laid out in any direction from the sharp summit.


West Peak's western vertical face overlooks the head of the Enchanted Valley and the North Fork of the Quinault River. West Peak and Crystal Peak to the west are famous for their magnificent falls that tumble down their sandstone faces to form the Quinault River. Runoff from West Peak also drains north and west into the Hayes River, into the Elwha and finally into the Strait of Juan De Fuca. Cupped beneath the summit ring of West Peak is the Eel Glacier which runs on the south side from Echo Rock across the western face and covers the north slope of the Anderson Massif as well.


When viewed from the northeast, West Peak spires deep into the sky with a lofty summit that takes the breath away. It is little wonder that this seldom climbed mountain is one of the most breathtaking areas of the whole Olympic Range. Views encompass the Dosewallips region to the north, as well as the steep north wall of Chimney Peak and surrounding peaks, and also the White Mountain area to the south. It provides an exciting rock climb experience as well as glacier travel in a remote setting.

The Anderson Massif is best reached by either the Dosewallips or Enchanted Valley routes, via Anderson pass. The directions to get to the Enchanted Valley are: "From U.S. Highway 101 at mile 125.5, turn east on the Lake Quinault South Shore Road. The pavement ends after another 11.3 miles of bone-jarring bumps, the road ends at the Graves Creek trailhead." (Hiking Olympic National park, by: Erik Molvar, P. 175)


From the trailhead on the South Shore Road near Lake Quinault it's a 23.5 mile backpack trip to Anderson Pass and another half mile to the glacier moraine which is south east of West Peak. The route from here is up the Anderson Glacier to Flypaper Pass and then around behind Echo Rock (located in the center of the massif) descending onto Eel Glacier. The bergshrund there can be a problem in late summer. Traversing NW from here and on up a rotten knife edge ridge will lead to several false summits. The westernmost summit is the true summit. 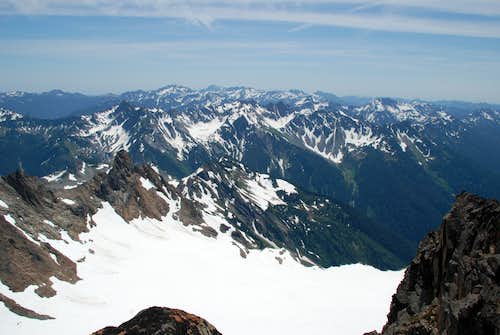 The Anderson Massif is usually climbed from June to August but is also a popular winter destination. All the essential gear should be used on this peak, ropes, axes, helmet, crampons, etc.

A great camping site beneath the Anderson Massif is Honeymoon meadows on the north end of the Dosewallips trail. This is only 2.5 miles from Anderson Glacier Moraine.

Another option is to camp in the Enchanted Valley in the Quinault River Valley. It is about 7 miles up to Anderson Pass from this area.

Might you add that the west Peak of Mount Anderson is the geographical apex of the Olympics??