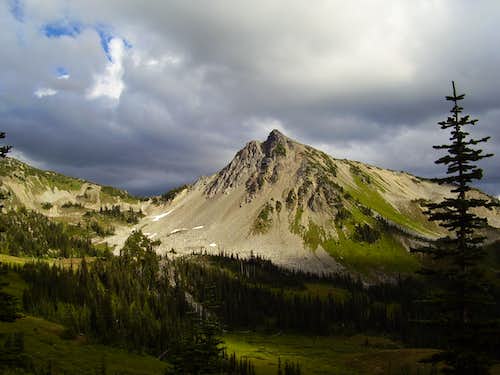 Lost Peak is located in the East/Central Olympic Mountain Range of Washington State. The long distance of the Dosewallips River trail makes Lost Peak a difficult peak to get to. Anyone hiking from Cameron Pass to Dose Meadow will surely notice this prominent talus peak overlooking lush meadows of Sub-Alpine Fir, Magenta Paintbrush, American Bistort, Blueberries and other various sub-alpine plants. Located to the east of the Lost River and north of the Dosewallips River, Lost Peak provides a natural environment for Black Bear, Roosevelt Elk and Olympic Marmots.

It is somewhat overshadowed by the more massive Cameron Peak, rising to the north. Yet, Lost Peak itself is more than 6,500 feet and would be dominating in any of the southern or western regions of the Olympic range (outside of Mount Olympus). This helps to keep Lost Peak overlooked by many climbers and gives one a chance to enjoy long days of solitude around its rocky pinnacle.

Be Cautious during Blueberry season when climbing this peak, due to the large ammounts of Black Bears in the area (I saw one while coming around a tree at 20 feet, just after skirting away from another one). It is always better to be safe this far out in the Olympic Wilderness. 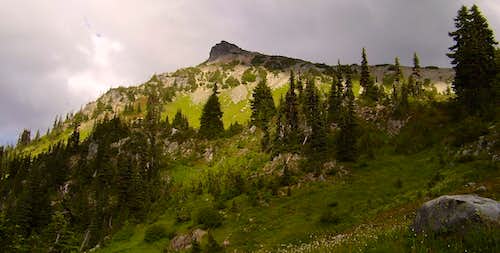 Lost Peak from the approach to Lost Pass

Lost Peak's gentle slopes give way to a rather jagged tangle of rock spires that reach to the north east. It looks massive and imposing from the Lost Basin, but when viewed from the south it takes on a more gentle and less agressive aspect. Views from this peak are exceptional, with major Olympic Peaks such as Mt Olympus, Mt Deception, The Needles, Mt Constance, Mt Mystery, the Anderson Massif, Mt Cameron and the Bailey Range all within viewing distance. Lesser peaks such as Wellesly Peak, Piro's Spire, The Brothers, Mt Stone, Mt Elk Lick, Sentinel Peak, Mt Claywood, Little Mystery and Mt Fromme are dispersed amongst the giants of the range. The most majestic view is of the Mt Cameron massif to the north. Cameron's south slope's fall away into the Lost Basin. From the north end of the summit a cliff drops over a thousand feet into a beautiful basin of several topaz colored lakes to the south of Mt Cameron.

Beneath it's summit, to the south, is a beautiful mini-basin filled with talus scree and a permanent snow field, lined with wildflowers. This area offers a gorgeous view of 1000 Acre Meadow, Sentinel Peak, Wellesley Peak and the Anderson Massif to the south. From this basin it's a 10 minute scramble up boulders and loose rock to the summit block.

Although not a major challenge, Lost Peak is a very enjoyable climb, with rewarding views, exceptional wildlife, and solitary freedom. Chances are you won't meet anyone on Lost Peak, given it's remote distance from trail heads. Maybe it is Lost in a sea of giant peaks, but Lost Peak is worth the climb for it's severe beauty. 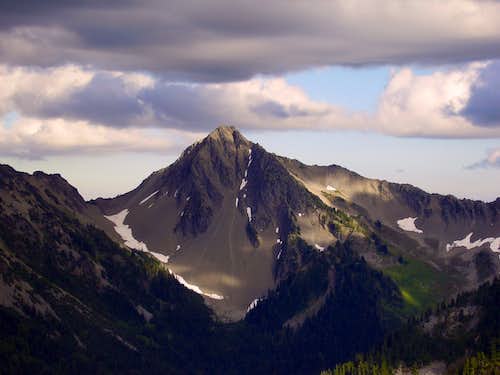 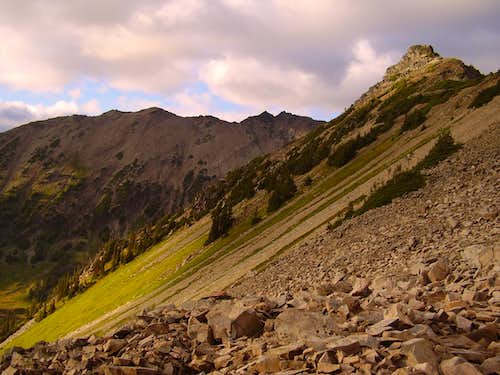 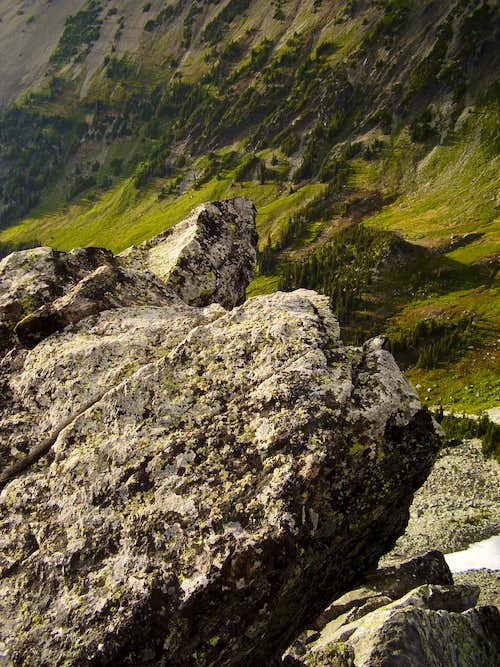 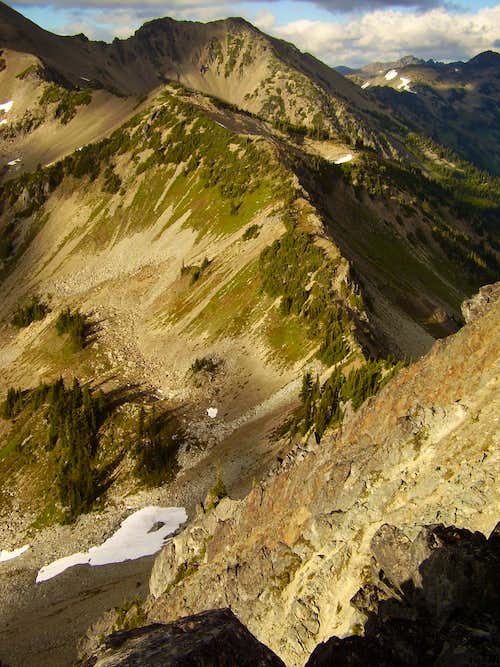 Looking north and east from summit

There are several possible routes to reach Lost Peak, but all will require multiple day trips. The Dosewallips Trail to Dose Meadow is now extended, due to the road washout. This adds on about another five miles of distance. It's about 17 miles to Dose Meadow. From there turn north onto the Lost Pass Trail, wich at only .9 miles, is extremely steep, gaining over a thousand feet. Lost Pass lies at the southwest end of Lost Peak. Overall there is about 5,000 feet of elevation gain with this route.

The second route is from the Cameron Creek trail, which is an 8.5 mile route to Cameron Pass. Continue following the trail for 1.9 miles to Lost Pass. But this route will require hiking from either Deer Park or, up the Gray Wolf, to reach the junction at Three Forks Camp, where the Cameron Creek Trail starts. There is just over 5,500 feet of elevation gain for this route. 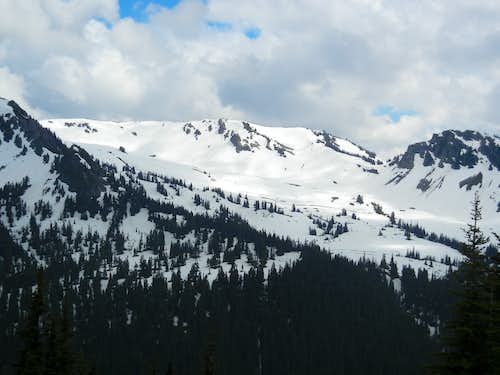 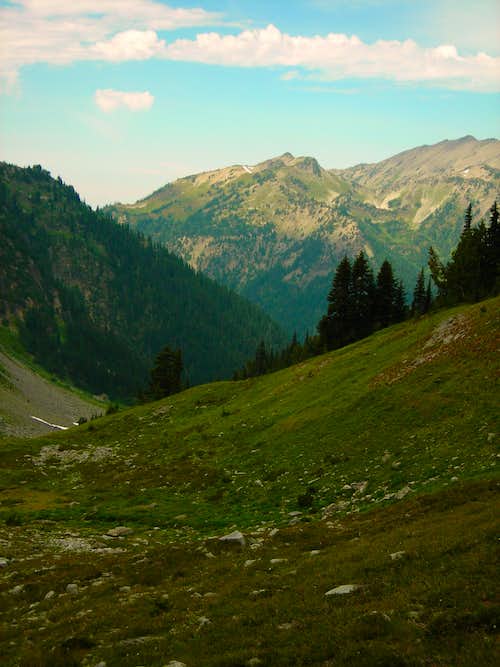 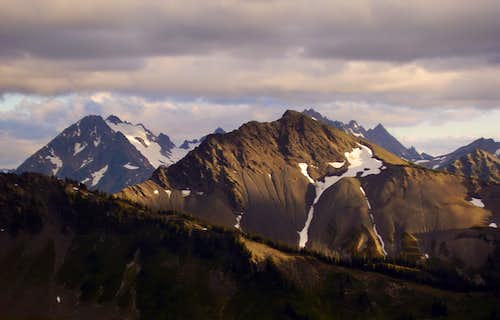 Excellent camping opportunties are available at Dose Meadow, Bear Camp, or Deception Creek, all within easy day-hiking distance of Lost Peak. These Camps along the Dosewallips River are usually available, even during the busiest month of August. Also, Cameron Basin to the north has camp sites available, but is a much more streneous way of reaching Lost Peak on a day hike, although highly scenic!

If one is coming from the Elwha River trail Hayden Pass, although not an official camp site, offers grand views of not only Lost Peak but a majority of the northern Olympic Range. Although the terrain is rather rocky and rough it may well be worth it for one night to stay in this picturesque place. 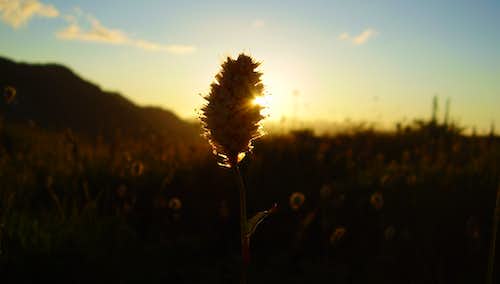 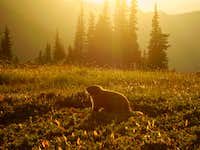 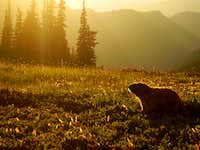 A host of Marmots, Black Bears and Roosevelt Elk roam the slopes of Lost Peak. Please show respect for these animals and don't feed them. Also, many Olympic Wildflowers can be damaged easily, due to the altitude. This place should be preserved as much as possible
for others to enjoy and experience. 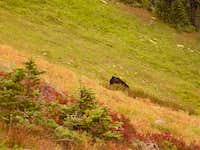 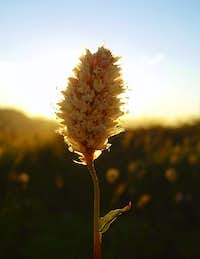