Mount Stone is located in the south eastern corner of the Olympic National Park. Its neighbors include Pershing, Bretherton, and Skokomish. Sone lies immediately north of the Hamma Hamma River River Road (FS road 25) which is also the location of the normal trailhead for climbing Stone. Though the summit (and the two prominent subsummits) lies within the boundaries of the national park, much of its southern flanks lie within the Mount Skokomish Wilderness area. There are three summits on Stone: South (main, 6612 feet), Middle (c. 6600 feet), and North (6400 feet). The first two have class 3 routes to their respective tops; the North summit has a class 2 route. Stone can easily be climbed car-to-car in a day from the Hamma Hamma River Road or can be combined into a pleasant overnight outing along with the climb of the nearby Mt. Skokomish.

The standard route for Mt. Stone is the approach from the Putvin Trail. From Hoodsport, WA drive US highway 101 north for 13.5 miles to the signed turn off (west) for the Hamma Hamma River Road (FS road 25). Take FS road 25 for about 11.5 miles from US 101. The road is paved part of the way (past the trailhead for Lena Lake/The Brothers) but the dirt portion is well maintained and easily passable by low clearance vehicles. Keep an eye out for a historical marker (on the right hand side, Putvin's grave). You should see an unmarked trailhead parking (road becomes wider) on the left side of the road immediately past the sign. The starting point for the hike in is on the right side of the road - look for the "Putvin Trail" sign.

Washout Information
In 2008 a washout blocked the last mile of the road to the trailhead. By late 2009 the washout had been repaired to the point of being passable by high clearance vehicles. As of 2012 the road has been completely repaired and is passable by any standard passenger vehicle. Thanks goes out to the forest service for this repair.

Update: Spring 2013 - from StukeSowle
Just an FYI, took a side trip up the Hamma Hamma to check out the area and about 11.5 miles up the road, a huge boulder has crashed down upon the road creating quite a deep rut in the road. A high clearance vehicle should have no problem navigating it, but I was hesitant to do it in my Lancer. I'm going to predict that some travelers will take the time to fill in the rut in short time making the road passable to all vehicles again.

The easiest route up Mount Stone requires some class 3 scrambling which some feel should be considered class 4 in a couple spots (rating is debatable and depends on route). Route 1 is the standard route up and is rated as class 3 in the Olympic Mountains climbing guide. The Putvin Trail is known for it's steepness and includes a couple short sections of class 3 up rocks and tree roots before reaching a basin. Shortly after reaching the basin you come to a small pond affectionately known as "Frog Pond". From here the route goes largely cross country although there are a few boot paths/climbers trails that you will find along the way.

After the basin containing Frog Pond you can veer right to scramble up a brushy gully to reach a talus/boulder field just below St. Peter's Gate. This route is excellently outlined by Klenke in this photo: 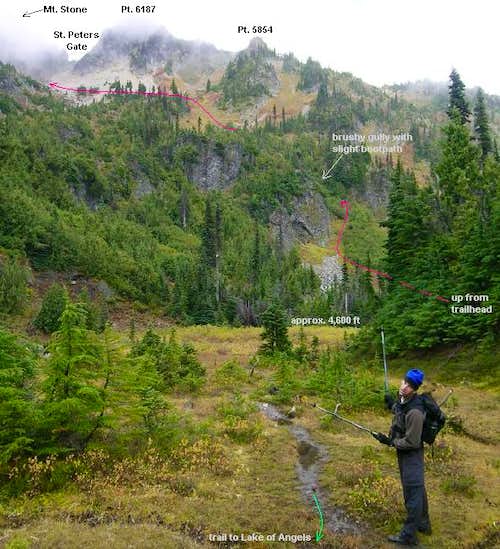 Route 1 as described by Klenke


Alternately, the talus/boulder field can be reached by following the trail to the Lake of the Angels past Frog Pond until you reach a creek crossing. Prior to crossing the creek a bootpath can be found following the creek for a short distance before becoming faint and leading to a bushwhack. You may also find a boot path leading north from the Lake of the Angels for those staying the night at the lake which also leads to the talus/boulder field.

Once into the talus/boulder basin you will notice St. Peter's Gate, an obvious notch with cliffs on each side. You will not be heading up to St. Peter's Gate, but rather heading left under the long band of cliffs up and around to the left where you will reach a pass and a class 3 section starting on your right. 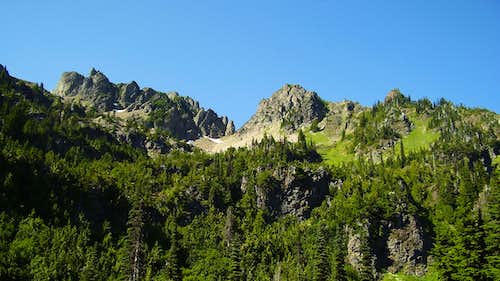 St. Peter's Gate is the notch, go left under the cliffs.

Once you navigate around the cliff band the rest of the route is class 3 (with some class 2) up to the summit. Several sections of scrambling are viewed here:

No passes required for parking at the Putvin Traihead.

If you're planning on camping within the national park, a backcountry permit is required. See the "Mountain Conditions" section below for details on obtaining one.

"Normal climbing season" - July through September - offers the most stable weather. Early season and winter climbs will obviously be made more difficult by the snow-closures of the Hamma Hamma River Road (trailhead is at approximately 1500 - 2000 feet).

A backcountry camping permit is required for all overnight stays within the Olympic National Park. Contact the Wilderness Information Center (see above) regarding permits. The most likely camping destination for a Mount Stone climb is at the Lake of the Angels, a popular destination for hikers, backpackers, and climbers. 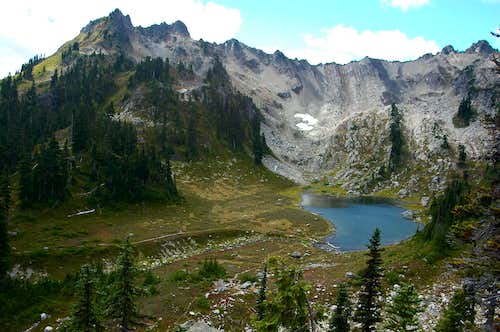 Lake of the Angels

Contact the Olympic National Park Wilderness Information Center (WIC) in Port Angeles, WA at 360-565-3100. You can also visit their (fairly good for NPS) website: WIC website . The rangers there are very helpful and usually well-informed as to trail conditions etc. Note that some but not all areas within ONP are subject to camping quotas. The rangers readily accept reservations.

The only known guidebook to list Mount Stone is the Climber's Guide to the Olympic Mountains. It discusses three possible summit routes as well as routes for the two subsummits. The descriptions are brief but fairly accurate (for the most part). The book also has a 3D projection sketch of Stone and vicinity.

Bob,
I've added your information to the main page of Mt. Stone. Thanks for adding this!
Radek

Bob,
I've added your information to the main page of Mt. Stone. Thanks for adding this!
Radek

The forest pass requirement has recently been dropped for the Putvin Trailhead. Passes are still required at Lena and Mildred THs.

This attached link to the Dept. of Transportation weather page has mountain forecasts for all of Washington state. Just point at the map until the zone you want is outlined and click.
http://www.wsdot.wa.gov/traffic/forecast/Default.aspx?zone=WA012.

The trailhead is no longer accessible and you have to park alongside the road, a mile short of the TH due to a huge slide that has blocked it. I talked to a forest ranger and he said he didn't know when it would be cleared, if ever. Lack of funding for road maintainance is a huge problem for the FS these days. Add two miles roundtrip to the Putvin trail route.

Hi Dean, thank you for the correction! I've added it on the main page. I'm sorry for the delays but was away from SP for a while. Hope all is well on your side. Cheers, radek

I was prepared for a bit of road hiking today, but the washout Dean mentioned has been opened to traffic, and you can once again drive up to the Putvin trailhead. It's extremely rough, and there's a sign saying that it's open to "high clearance vehicles," but my Volvo wagon (with almost no clearance) was able to make it over. Mind you, I was going at a crawl and with great care, but most passenger cars should be able to cross it. The section is only about 100yds long, so I'd recommend scouting it on foot first like I did if you have concerns. Truly amazing how much of the hill came down onto the road; big kudos to the Forest Service folks who were able to get it back open. As a separate note, at about mile 9, less than a mile after the pavement ends, the road is extremely rough where they're in the middle of putting in (replacing?) two culverts. Still passable in a passenger car, of course, but folks should exercise care.

Hey Radek, I gave this one a go yesterday but turned back at about 5500 feet with all the slushy snow and slow going. When will the snow ever melt this season? Anyway, the roadblock at 10.5 miles, although technically "cleared" is not all that passable for low clearance cars. There are a few ruts in the road before that too where low clearance cars will want to crawl over. I made it to the trailhead in my wife's Toyota (please don't tell her!) but most cars are going to scrape the rocks and ruts. Getting to the point where something higher clearance is advisable. Also, no NW Forest Pass is needed at the trailhead now. I think also, where the trail goes down the old road is only about 70 yards or so, not 200. Quite a trail, over 5000 feet up. I only managed 4000 before I hit my turnaround time and slow slushy snow. FYI, the trailhead is at 1530 feet. Hope you are doing well, Brian

Brian, thanks man - give me a day & I'll update the info page. Those fun Olympics death marches eh? :)

Yeah, apparently I had forgotten what real pain was like. ;- ) Actually, it was a beautiful day and setting. Hope you had a good weekend too.

The washout is now completely fixed, its a brand new dirt road. Also, any idea of distance and elevation gain?

Thanks for the heads up on the road. Sorry SouthRaker :) but it's been a loooong time since we've been up there and all I recall was that it was an OK car to car day. Let me know when you've done this peak & if you want to take over the SP page for it. Thanks!

Just summited last weekend! It was awesome! I did some research and Peakbagger.com has it listed at 4.8 miles one way and 5047 elevation gain for route 1. If you want someone to take the page over I'd be happy to.

Just an FYI, took a side trip up the Hamma Hamma to check out the area and about 11.5 miles up the road, a huge boulder has crashed down upon the road creating quite a deep rut in the road. A high clearance vehicle should have no problem navigating it, but I was hesitant to do it in my Lancer. I'm going to predict that some travelers will take the time to fill in the rut in short time making the road passable to all vehicles again.

Thanks for the update! I've added it to the main page.

Writing this on 9/11/2016. According to the National Forest Recreation Opportunity Guide, no pass is required to park at the Putvin Trailhead.

Re: No pass required

Awesome! I'll update that section on the page, thanks!