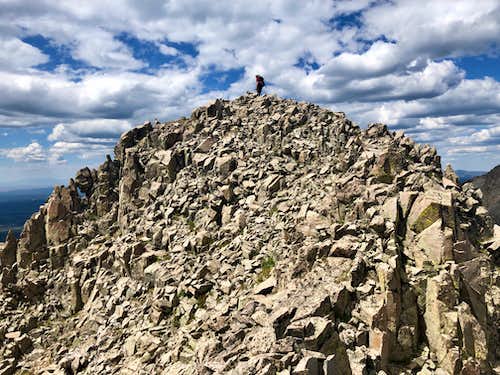 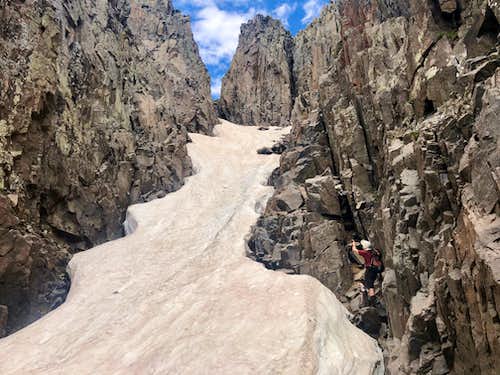 Couloir between Middle and West Babcock - we had no crampons therefore bypassng on rock
Babcock Peak is a low 13er located in the La Plata Range of San Juan Mountains. The peak has several summits and for a long time there was a confusion about which summit is the highest. Most maps are pointing to the east summit, marked on most maps, but this east summit is only 13,149 feet high. Middle summit is higher at 13,180 feet. This peak does deserve planning and preparation since each summit requires a different way up and all are class 3+/4th class by its easiest route. 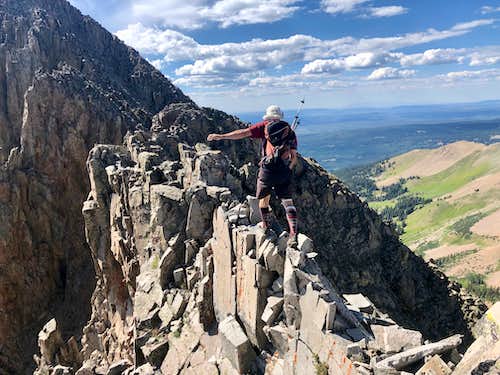 Most peak baggers head only for the middle summit and are done with Babcock after reaching this goal. My goal was to reach the highest Middle Babcock, but also to climb West Babcock and explore the infamous Knife Edge towards the Spiller Peak. 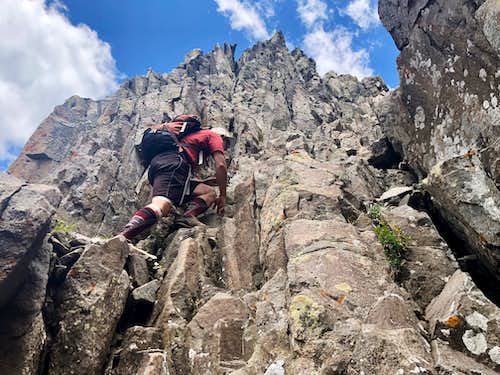 Up Middle Babcock
For this reason, I chose a slightly more technical ascent of Middle Babcock from a couloir between West and Middle Babcock. There is no easy way to connect Middle and West Babcock high up from the saddle between these two points. Middle Babcock is guarded by steep, overhanging rock cliffs and loose terrain. I have noticed a sling around one of the rock pinnacles, so rappel from Middle Babcock is possible if you have your rappeling gear with you.

Guide to the Colorado Mountains with Robert Ormes (sort of a bible of Colorado Mountains) provides only a brief mention:" Multi-summit Babcock Peak (13,149 - note this old guidebook uses the lower elevation and east summit as the main one) forms the southwest fringe of the Tomahawk Basin. When inspected from a distance, it appears that a needle in its western group is higher than the official eastern end. The east summit is best approached from the east ridge. The west group of pinnacles goes best 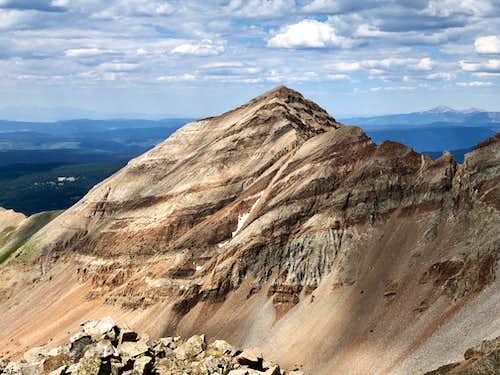 Hesperus Mountain as seen from the summit of Babcock Peak 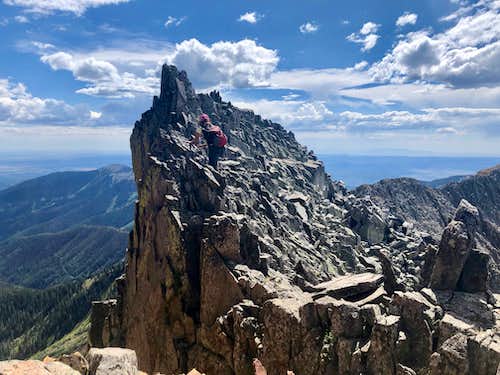 The Knife - ridge between West Babcock and Spiller Peak
up the couloir in the extreme southwest corner of the basin. The western summits of Babcock are connected to Spiller by an east-west ridge known affectionately, and accurately, as The Knife".

Dave Cooper also mentions an error that east point is NOT the high point. The most common approach for Babcock is from Tomahawk Basin. However, for the Knife it makes more sense to use the access via Boren Creek Road.

Range: La Plata: This seldom visited range offers some fine scrambling, and is dominated by Hesperus Mountain, one of the secret peaks for Navajos.

Class: 3+ by its easiest route, we did a little more dificult route 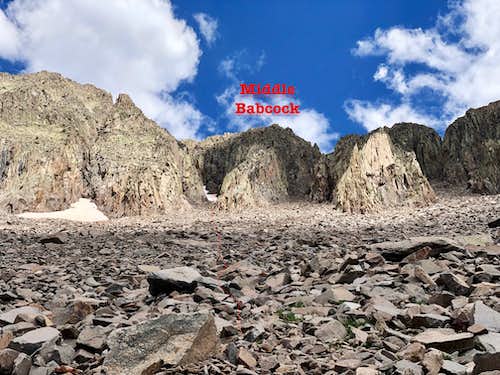 Babcock Peak - the main summit is the middle one. 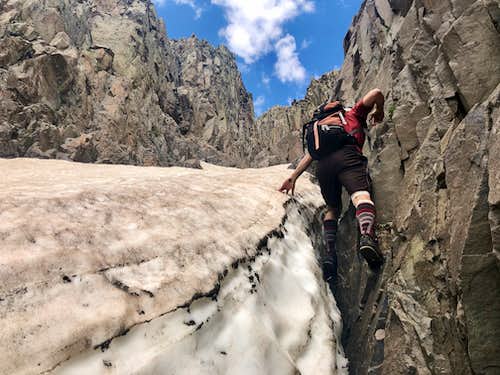 When one is unprepared - we left crampons in the car.
I will describe our route, which did not follow the easiest path. Our goal was to summit the highest point of Babcock Peak, then to get onto West Babcock and traverse over The Knife ridge to Spiller Peak. Per reports there is an easier way up Middle Babcock from the couloir between the East Babcock and Middle Babcock.

We chose to hike up Boren Creek Rd. I did not want to beat up my car and it was a good choice. The road is rough and narrow. I think we were able to walk faster than we would have been driving. There was a gate higher up - just for the cattle. The road ended up at a basin below the Babcock Peak. There used to be a mine there. We ascended towards the 2nd couloir from the west. I knew from my home research that this couloir leads between West and Middle Babcock Peak. Initially the slopes were grassy, higher up it turned into a talus.

There was still a lot of hard snow inside the couloir, and unfortunately we had no crampons, so we ended up scrambling between the rock and snow. Dave Cooper describes in his Colorado Scrambles to head up the gully and when it starts to take a turn left, to take another gully to the right. Somehow we missed this, but we found some weakness in the wall and were able to ascend and eventually intercept south ridge of the Middle Babcock. There was a lot of scrambling, 4th possibly a few low 5th class moves, but did not feel too hard. It was fun.

The summit has a cairn and a glass register. The views of Hesperus, Lavender and Moss are excellent. We tried to investigate an option to down climb directly into the saddle with West Babcock, initially if went nicely, but then we ran into steep loose rock wall. There was a sling around a rock pinnacle and rappel would be an option, but we had no rope.

We descended the same way as we went up and continued up the main snowy couloir to the notch between Middle and West Babcock. From here, we could see that direct ascent up Middle Babcock is impossible - overhanging loose route. But the way up West Babcock went nicely at class 2 and 3. We rested a little bit on the summit of West Babcock and checked The Knife.

The Knife went easy initially. The route is pretty straightforward. It gets harder halfway through and close to Spiller Peak. I have to say I expected it more of a solid rock, and was surprised by relatively stable stacked up rocks forming it. We tried to stay right on the knife as much as possible. I forgot to time it, but Dave Cooper writes that it takes about 1 hour on traversing The Knife. Scrambling is mostly class 3, there is a lot exposure. When you reach a major notch in the ridge, descend into it it on the right side of the ridge. Down climb the north couloir for about 50 meters (loose terrain) until you gain grassy ledges in a shallow gully on the west side of the notch. Climb up towards Spiller Peak, 3rd class scramble. Avoid the 2nd notch.