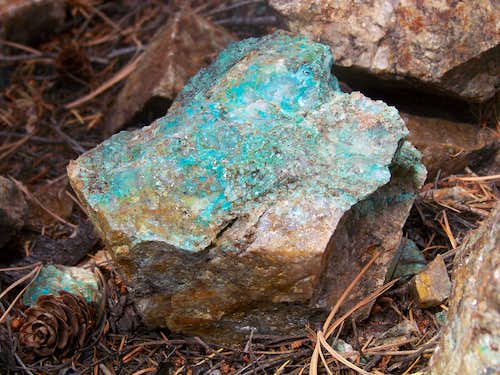 A rock found on the summit of Blue Mountain

Blue Mountain is a shapely, double-humped 9-er due south of the small community of Lake George, Colorado. The peak is close enough to Colorado Springs to make for a pleasant day outing for residents of that metropolitan area. Those with a 4x4 will find the outing to the summit of Blue Mountain abbreviated enough to attempt en route to other destinations.

The pleasant summit ridge is interrupted intermittently by old mining disturbances. This north-to-south running ridge affords the visitor delightful views to the east of Pikes Peak and to the west offers a surprise view of the trefoil Sawatch Fourteener Mount Princeton. 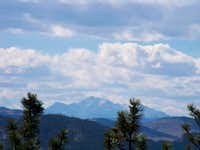 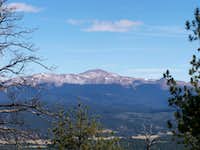 West side of Pikes Peak

Blue Mountain rises just west of the Teller County line in Park County. Due south of Lake George off of Hwy 24, Blue Mountain is circled on three sides by Park County 61, a well-graded gravel road. 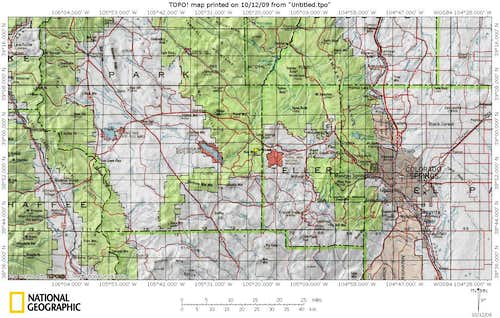 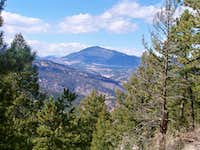 Badger Mountain to the northwest 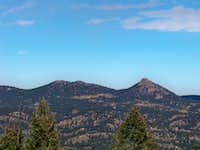 Northeast from the summit ridge

FS 244 and Immediate Surroundings
A few rustic campsites can be found along FS 244 and spur roads off of it. These sites are available on a first-come-first-served basis and are dry: No water, from a pump/well or other water body, is available, so pack water sufficient for your group size and the duration of your stay.

Cabins, Lodges and Hotels
Numerous cabins can be rented in and around Lake George. There are also a few cabins/lodges/dude-ranches along the Tarryall Creek catering, especially to the fly fishing visitor. For example: Ute River Ranch. 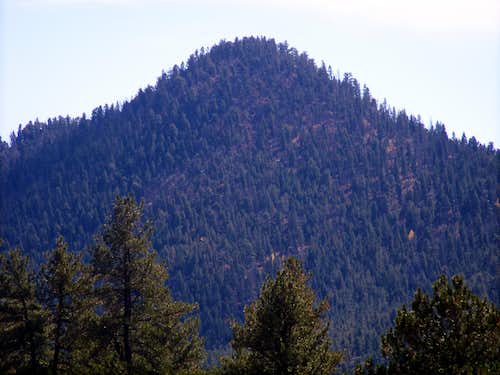 Approaching Blue Mountain from the North 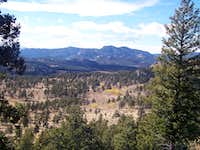 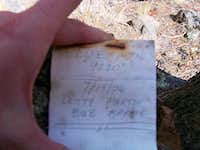 Summer: The route can be a bit hot and dusty in the summer, but the road should be dry and accessible and the breezes on top pleasant.

Spring: The snowpack is less deep here than in the high country and melts out faster than higher areas to the west. None-the-less, expect post-holing through unconsolidated snowdrifts in the trees.

Winter: Thanks to proximity to US Hwy 24 and “primary dirt roads” 96 & 61, this peak is accessible year-round, though deep snows/drifts and 4x4 road closures would limit the visitor to the eastern slopes access to this peak.