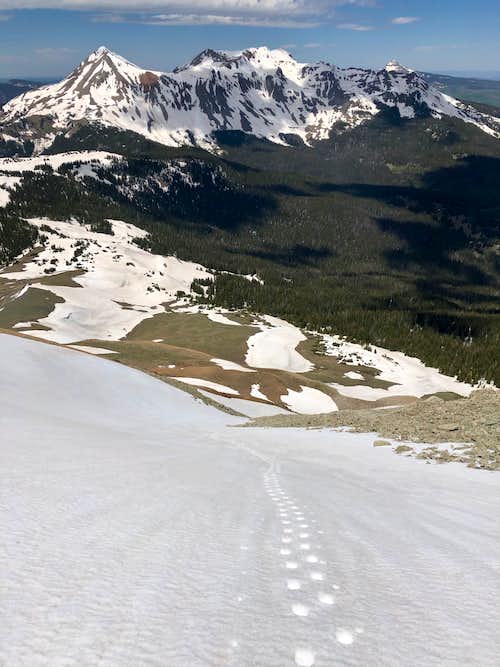 Boskoff Peak or formerly knowns as "Woods Peak", or Unnamed 13123 is a low 13er located near the beautiful and historic town Telluride. Why so many different names? The peak used to be unnamed, unnofical name was "Woods" since it arises above Woods Lake. There was a proposal to commemoratively name two unnamed thirteen thousand foot peaks that straddle the border of Dolores and San Miguel counties between Navajo and Elk Creek Basins after two prominent American mountaineers, Charlie Fowler and Christine Boskoff.

Charlie Fowler and Chris Boskoff were residents of Norwood at the time of their tragic deaths during an alpine climb in Tibet in 2006. Part of the attraction of the peak naming proposal is the proximity of the peaks to each other, symbolizing the partnership in life and death of Charlie Fowler and Chris Boskoff and that proposed Boskoff Peak can be seen from the town of Norwood where they resided. The Bill of renaming those 2 peaks was passed in January of 2019. 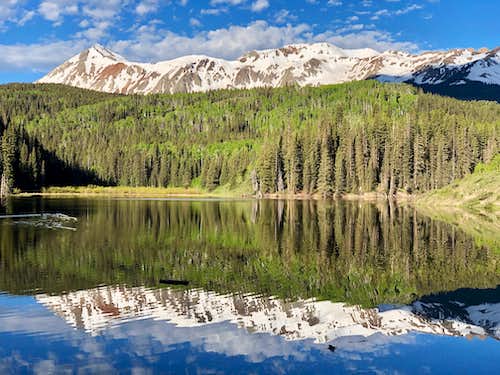 From Telluride take CO 145 towards Placerville. Take left on well signed Fall Creek Road and follows this road for 8 miles to Woods Lake Campground. The road is passable by 2 WD low clearance vehicles. 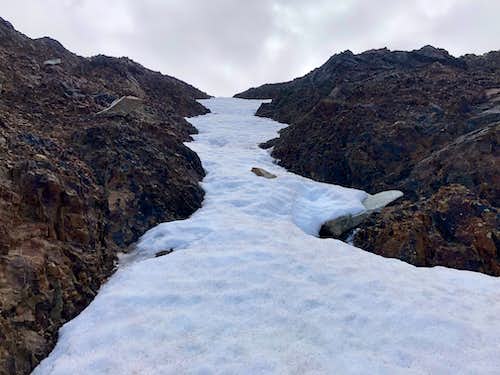 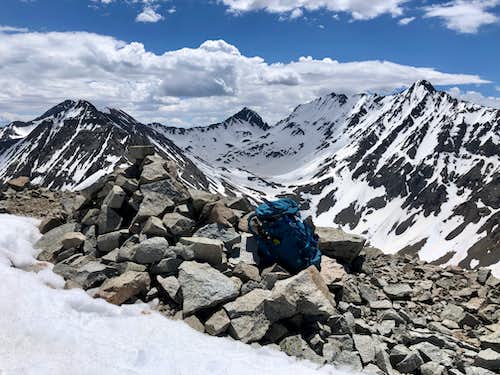 As any mountain there are many ways to reach its summit. I chose to access it from Woods Lake since I was looking on this route while hiking up Lone Cone and Flat Top Peak earlier this year. The west ridge looked really mellow and inviting. I started from trail parking at Woods Lake and followed Elk Creek Trail # 407. I lost the trail about 2 miles in since there was a lot of snow, but continued in the general direction of the mountain (Gaia application was very useful here since there was dense forest and mountain was not visible). When I finally arrived at the northwest base of the mountain and spotted a nice snow couloir going up. I changed my mind and decided to go up this snowy field, which narrowed mid way to about 1 meter only and then opened up again. The slopes were not sleep, max 40 degrees. The couloir ended up just short of the summit.

The summit offers excellent views of El Diente and Mount Wilson, Gladstone Peak, Fowler Peak and down into Navajo Basin. There was a cairn on the summit, but no summit register.

Descent: I chose to explore the mountain and descended down via southwest ridge.

Parking, hiking, mountaineering is free. The peak itself is located within Lizard Head Wilderness area, so wilderness area rules apply. Group size is limited to 15 people. Camping is prohibited within 100 feet of lakes, streams and trails except within Navajo Basin. Campfires are prohibited within 100 feet of any lake, stream, or trail; above treeline; and within Navajo Basin. Dogs must be under direct verbal control or leashed at all times.

Summer is the most common time. Early fall is a great time. The peak cold be done in the winter, but always check for avalanche conditions.

There is a nice campground at Woods Lake, dry vault toilet, accessible easily by 2 WD vehicles.