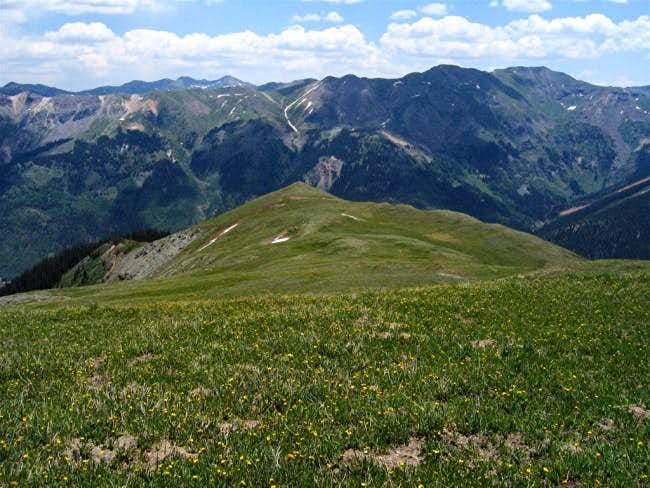 The long ridgeline that forms Brown Mountain, west face as seen from the slopes of Hayden Mountain The western slopes of Brown Mountain rise directly above Route 550 in Ironton Park. These slopes are covered with a mixed forest of Aspen and Pine up to around 11600 ft. Above treeline, the slopes become very steep but are mostly grassy with occasional fields of scree. Unfortunately, much of the land below the middle and northern peaks of Brown Mountain (on Route 550 side) seems to be private property. This restricts direct access to these peaks. The southern peaks, however, can be accessed via a 4 wheel drive road (known as Brown Mountain Rd.) that starts on Route 550 and zigzags up the forest to near treeline directly below Peak 12982 where it turns into a trail that can be traced until around 12300 ft. From the end of the trail, the southern peaks of Brown Mountain can be reached by hiking up the steep grassy slopes. (I ended up on Peak 13288 and did not have the energy to go down to the 13100 ft saddle and back up to the official 13339 ft summit 0.6 miles to the south. Peak 13288 probably provides better views of Route 550 than the official summit).

The northenmost peak of Brown Mountain, which is also known as Abrams Mountain, is of particular interest. From the town of Ouray, Abrams appears as a sharp triangular peak that dominates the view to the south. I have attempted to climb Abrams twice: once directly from Route 550 and once from Brown Mountain Road. Both times, I ran into Private Property/No Trespassing signs. It seems, however, that from the summit of Brown Mountain one could hike along the crest of Brown's ridgeline to reach the top of Abrams. This will be a three mile hike and will involve a lot of ups and downs.

Brown Mountain is rarely climbed. You will not see much traffic on the 4WD road either.

Drive 7.5 miles south from Ouray (or 15 miles north from Silverton) on Route 550 to Ironton Park. North of mile marker 85, on the east side of the road, you will see a sign pointing to Ironton Park. Turn onto this dirt road and cross the creek over the bridge. After 0.2 miles, you will reach a signed intersection. Left goes to Brown Mountain and Right goes to Corkscrew Gulch. Turn left and go a very short distance until you reach a shallow creek that crosses the road. 4WD starts here. This is your trailhead (elevation 9750 ft).

No fees or permits needed for day hikes.

Camping and lodging available in Ouray and Silverton.

The locals may suggest parking on 550 and hiking up Brown Mountain to Mt. Abrams. It isn't easy!

There is no trail. It's bushwacking nearly all the way up and very steep in spots. I suggest it only for the most macho.