North of the Colorado River in Grand Canyon National Park is a collection of summits, buttes and plateaus named for Egyptian Gods, pharaohs and folklore. Ask a park service official about the naming, and they'll tell you how one of the early surveyors, really, really liked Egyptian shit (GCNP Rangers tend to curse a lot). But any good conspiracy theorist will tell you that this is linked to the greatest cover-up in US history.
In 1903, 16 years before the Grand Canyon was made into a National Park, an expedition funded by the Smithsonian and led by S. A. Jordon and G. E. Kinkaid reportedly discovered an incredibly elaborate underground city complete with mummies, hieroglyphics, and Egyptian artifacts. A 3 page story was published in the local newspaper in Phoenix describing the findings, stating that 2 artifacts were shipped to the Smithsonian for research. But Federal authorities cried hoax and blocked off the area for further investigation, and eventually the "discovery" was forgotten. The Smithsonian denies this expedition even existed. This area of the Grand Canyon is still restricted even today, at least for overnight trips. Additionally, all caves within park boundaries are strictly off limits aside for the cave of wonders near Horseshoe Mesa.
Regardless of whether or not these tales of lost underground cities in the Grand Canyon are true, the area does feature a number of excellent climbs including Cheops Plateau and Cheops Pyramid, named for an Egyptian pharaoh. While topo maps label the higher plateau as Cheops Pyramid, the pyramid itself is a detached pinnacle south of the plateau, separated a rotten class V ridgeline that has likely never been attempted. To tag both unfortunately requires a long tedious traverse around the base, climbing a class III ramp up the pyramid to the south, and an exciting class IV arete to the plateau from the north.

To climb the Pyramid and Plateau, one must access the Utah Flats Trail from Phantom Canyon Ranch, typically reached by hiking the Bright Angel Trail or South Kaibab from the South Rim, or the North Kaibab Trail from the North Rim. Rather than reinvent the wheel, here are the pages linked to these individual trails:
Bright Angel Trail 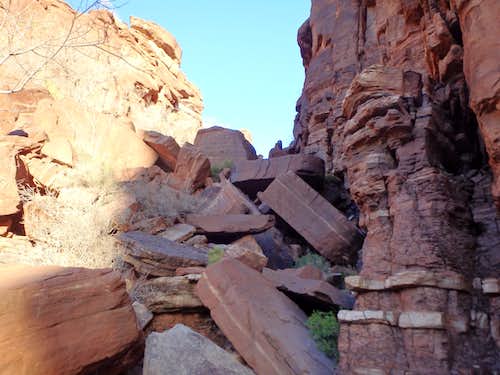 Heading up Piano Alley
Once at Phantom Canyon Campground, you want to pick up the Utah Flats route, which starts directly through campsite #1, the farthest campsite up-canyon just before the bridge. The start of the route is initially quite steep but relatively easy to follow, and heads towards a notch on the slopes about halfway up. From the notch, the route traverses above the canyon to the right, heading for a high saddle where the grade eases. From the saddle, continue along the trail up to Piano Alley, a gully strewn with boulders the size of, you guessed it, pianos. The trail is well defined up until breaching the top of the gully when you enter Utah Flats proper, named for Red slickrocks reminiscent of the Moab area of Utah. The trail is very easy to lose here with occasional cairns marking the way, but the general idea is to get above the slickrock and head NNW towards the ridgeline leading up towards Cheops Plateau. The trail becomes easier to re-find closer to this ridge. Once at the ridgeline, leave the trail, as it continues to the upper reaches of Phantom Canyon below. 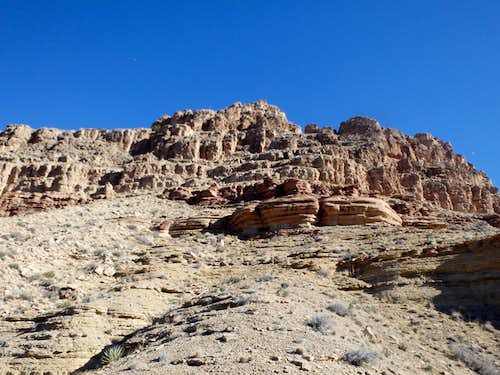 South Face of Cheops Pyramid
Cheops Pyramid
The lower pyramid is south of the plateau, and requires a tedious side-hilling traverse to get to the base of the class III climb. There are no defined routes, but I would recommend staying low just above the redwall cliffs; higher up is looser with some steep, sketchy gullies to work past.
Once at the base of the Pyramid, basically straight south of the summit, follow a series of class III ledges up to the top. There are occasional cairns along the way, but it isn't overly complicated, and a number of variations are possible. Once at the small summit, you can find a register tucked under a small cairn, only averaging 1-2 parties per year. There's a fantastic view of the Colorado River to the west, and a good look at the rotten ridgeline that you won't be using to get to Cheops Plateau.
Cheops Plateau 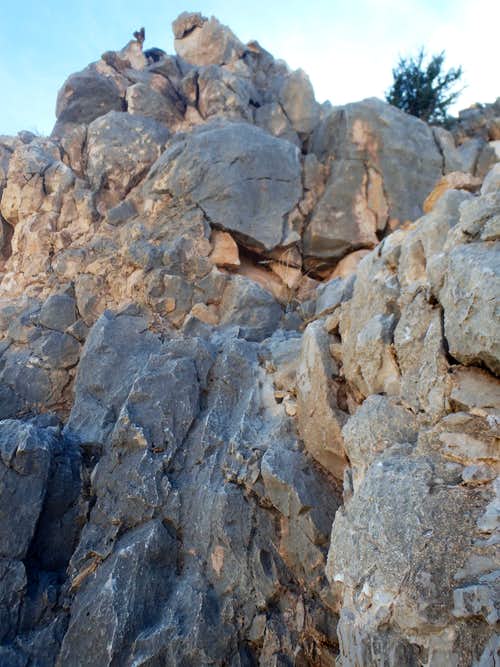 View of the Crux, 200' of air on the left.
While the summit itself isn't as dramatic, the climbing to gain the plateau is much, much better and the traverse to the NE arete of the plateau is more forgiving then to the base of the pyramid. Follow the ridgeline from the Utah Flats route straight up towards the cliffs above, gently angling towards the NE arete, which arises from the saddle with Isis Temple. The route starts well above the saddle, so there is no need to descend towards it. In my experience, opposite of the pyramid, it was best to stay high near the cliffs, as there was a faint game/ hiker trail that you could follow to the start of the climb.
The class III starts quickly from the start of the NE arete, and initially, the climbing is similar to the Pyramid, scrambling from small shelf to small shelf. About 1/3-1/2 of the way up, the ridge narrows, and you're briefly pushed off to the left, climbing a nice class III crack past some gendarmes. Shortly past this is the class IV crux- a 10' dihedral-esque section where your back is to thin air and a 200' drop. I have read multiple accounts of parties turning back at this point who were uncomfortable with the exposure. The holds are overall very solid, although the exit onto the next shelf is a little loose. If you're confident in your abilities, don't overthink it and just charge ahead. Once past this, there is just a bit more class III to work past. Just below the summit is a natural bridge that you can take the rest of the way up. It does look a bit crumbly, so if you'd like to limit any additional risks, there's an easy alternate class III crack to the left. Once on the plateau, it's an easy stroll to the high point with summit register and an elk antler summit cairn. 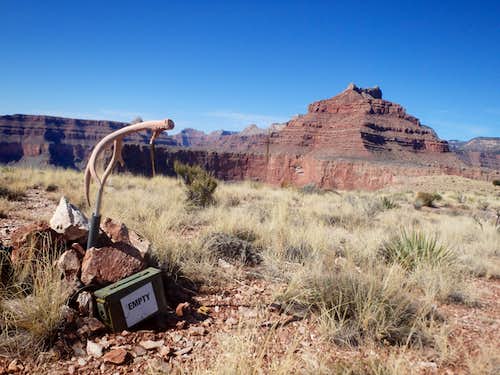 Cheops Plateau Summit
Admission to GCNP is $30 for 7 days. I highly recommend the "America the Beautiful" Pass for $80, which covers the entrance fees for all federally managed parks and land for one year.
Permits are needed if planning on camping near Phantom Ranch or Phantom Canyon. 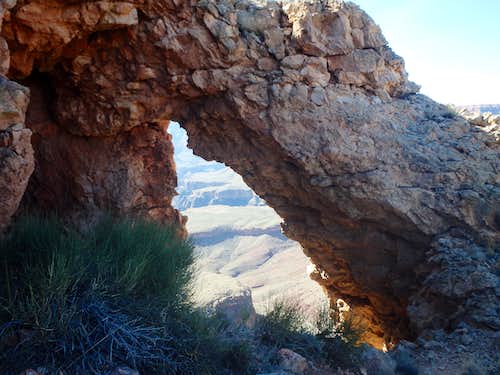 Natural Bridge near the summit.
As with most hiking in the Grand Canyon, Fall and Spring are the best. Summer will be brutally at that elevation in the canyon, and possibly deadly with those distances. Winter can bring ice on the upper portion of the canyon, but Cheops itself does not hold snow.

There are two developed campgrounds on the South Rim: Mather (which takes reservations) and Desert View. The closest backcountry campsite would be Phantom Canyon Ranch, and at permitted backcountry camping is available in the Utah Flats area, with water available in upper Phantom Canyon. There is plenty of places for camping at large in the National Forest just outside the park.