The Dragon corridor is a well known helicopter route along the North Rim flown over by dozens if helicopters daily during peak visitation. The corridor is named after the three 'Dragon' summits- The Dragon, Dragon's Head and Little Dragon. Little Dragon is the shortest undertaking of the three, a 2 mile bushwack from Point Sublime Road. Those willing to tolerate the brush will be rewarded with a rarely visited Grand Canyon summit and views across Milk Creek and its' bigger sister, the nearby Dragon and Dragon's Head. 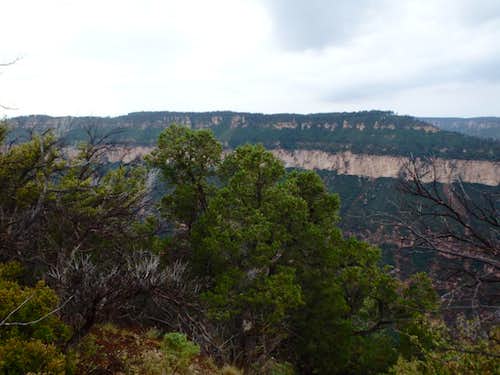 From the summit, looking across Milk Creek to The Dragon

From the town of Jacob Lake, drive south on Route 67 through the North Entrance Station of Grand Canyon National Park. About 3 miles before reaching the lodge and visitor center is the signed turn off for the Widforss Trail and Point Sublime Road. Set your odometer here. Drive about 1/2 mile to the Widforss Trail parking area. Continue through the gates along Point Sublime Road, ignoring the occasional side road, following any signs marked for Point Sublime. The first few miles of the road are in decent shape, but high clearance is required from 3-4 miles in, and 4WD is needed if the roads are muddy. At roughly 6.5 from the turn off from Route 67, park at the opening of a shallow drainage to the south of the road. It is near benchmark 8290 on most topo maps, although good luck finding the actual BM in all the downed wood. About 1/4 miles past this is a small open meadow with better parking options, and is really the only useful landmark when trying to find the turn off. 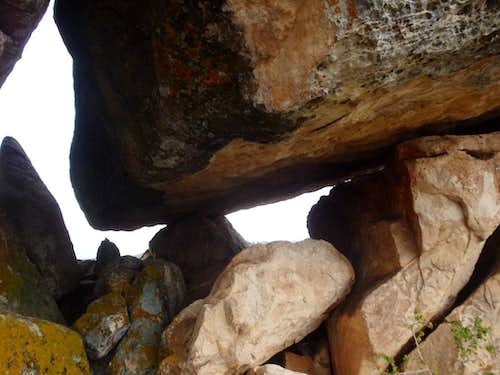 Boulders along the ridgeline 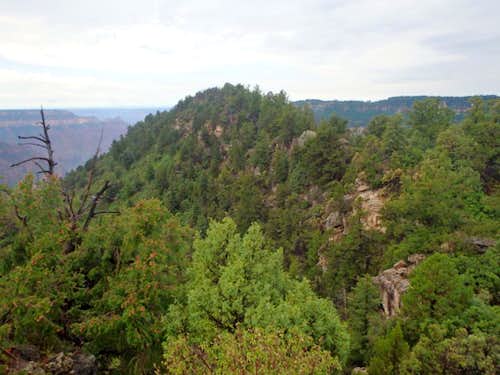 Summit from main false summit.
From the road, hike south through the woods staying more or less in the low point of the drainage, following the path of least resistance. The drainage is mostly scattered pine trees, with the major obstacle being the various down logs you'll have to work around. Follow this for about 1 mile until nearly to the rim. Resist the temptation to continue down the drainage- it will get brushy very quickly. Instead head upslope to the left through small aspens and some unfortunate pockets of acacia (hope you're wearing pants and long-sleeves!) and head down the narrow connecting ridgeline towards Little Dragon. About halfway down some boulders will slow progress, but your best bet is to scramble over them despite the exposure- traversing too low puts you in some seriously thick oak thicket. Things improve beyond the boulders as you near the saddle between the rim and a decent use trail materializes as you ascend the summit ridgeline. Some more sandstone features will intermittently slow progress along the way, but with improved brush, skirting around them to the west (right) is fairly easy. After one quick false summit, it's 100 yards along the ridgeline to the small summit cairn, highpoint and register.

Admission to GCNP is $30 for 7 days. I highly recommend the "America the Beautiful" Pass for $80, which covers the entrance fees for all federally managed parks and land for one year.
No additional permits are needed unless you're planning on camping off Point Sublime Road. Camping is allowed at any of the pull-offs along the way provided you have the proper NPS permit.

The Dragons can only be realistically climbed when the North Rim is open, typically May 15 - October 31 weather permitting. Winter is possible, but would require a pretty epic ski tour from Jacob Lake or climb up from the river. Despite the elevation, the North Rim can still be painfully hot in the summer, and summer monsoons are common.

There is plenty of places for camping at large along Point Sublime Road provided you pick up an NPS permit, which is currently $6/ permit and $10/night. In the National Forest just outside the park there is plenty of additional at large camping, no permit required. The Demotte Campground is located near the Kaibab Lodge just near the turnoff onto FR 611. There is also several developed campgrounds in Jacob Lake, as well as the North Rim campground within the park. 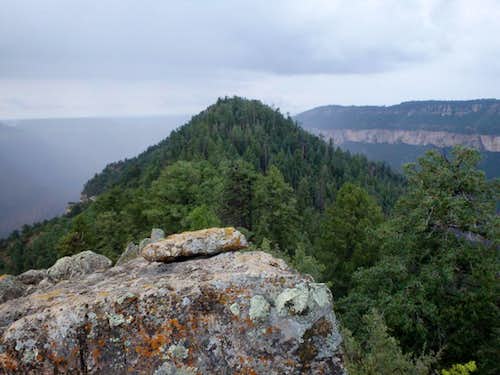