Fiske Butte is about the journey, not the destination. The small summit has at most 60' of prominence, and is really nothing more than a small bump in the canyon that someone happened to name. But don't let that discourage you. The hike out to the butte is a challenging, route-finding adventure: scrambling trail-less through multiple layers of sandstone cliffs to a perch right above the Colorado River, with views to the Walthenburg and Shinumo Rapids below. This is an intense Grand Canyon adventure to a summit that only sees about one party per year. 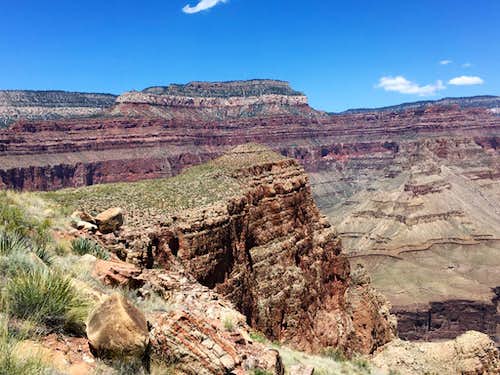 The tiny summit that is Fiske Butte.

Getting there is arguably more challenging than the climb itself. From Tusayan, drive north 0.9 miles from the last traffic circle north of town and turn left on to Forest Road 800, which quickly hooks south and becomes Forest Road 328. This is a nice place to camp at large if you're looking to avoid camping fees along the south rim. The first few miles of the road are in pretty good shape and slowly get worse as you pass the turn off for Rowe Well Road, an unrestricted road that connects Grand Canyon Village to the South Bass Trail (and a means to pick up a permit and not have to leave the park to get back to FR 328). Stay on 328 as the path becomes progressively more rutted. If you encounter soft mud that sucks at your tires early- turn back, it gets much, much worse and the road is truly impassable when wet. At a bit over 20 miles you'll cross into Havasupai Land and at ~22 miles, you'll reach a gate at Dodd Tank. This is occasionally staffed by a member of the Havasupai tribe collecting payment to pass through (more on that below). If no one is around, keep driving FR 328 (there is a dirt track which bypasses the gate to the left/south) for another 2 miles to reach Pasture Wash, which is described as a four way intersection, but in reality is two forks in rapid succession. Take the right forks both times and follow the handmade signs for the South Bass Trail. Continuing straight goes to Topocoba Hilltop, currently closed to nontribal members. Beyond Pasture Wash, the road gets even worse with ruts a good 8 inches deep. At this point you'll be heading northeast and will leave the tribal lands, reentering the National Forest. Another 2 miles will bring you to the National Park Boundary, and shortly after you'll pass an old NPS ranger station on the left, which has been out of use for decades. The road gets slightly better back on NPS land and you reach the South Bass trailhead about 3 miles from the NPS boundary. If you're looking to check out the old Fire Lookout on Signal Hill or hike Fossil Mountain, the turn off is the last sharp right turn before the trailhead. I was able to negotiate the route with a Subaru Forester, but I needed every millimeter of clearance, and most of the other cars I saw in the area were lifted. Clearance is more important than AWD/4WD, although even the toughest car would struggle if the road was mud. 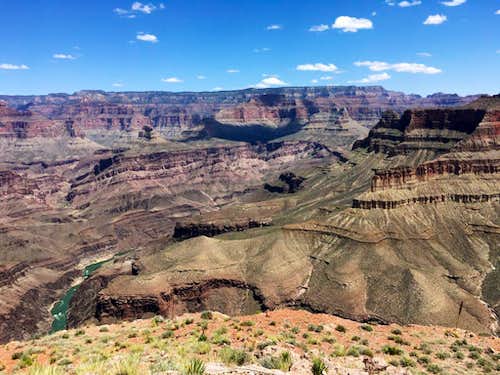 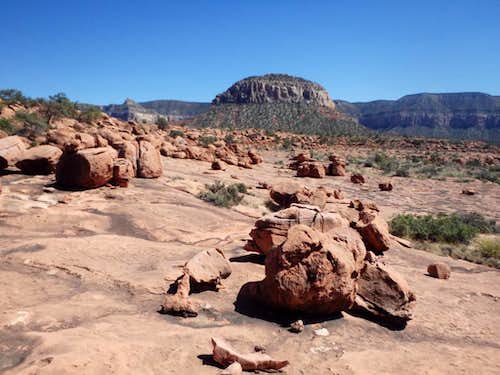 The Rock Garden on the approach
Approach: From the South Bass Trailhead, hike about 2 miles down switchbacks through the Coconino to reach the Darwin Plateau. Mount Huethawali will dominate the view as you descend. Once on the plateau, you'll need to continue slightly east to avoid some of the Redwall cliffs formed by a shallow drainage off the plateau dropping to the west. Leave the trail once you spot a good line through the Redwall (shouldn't be more than easy class 2) and traverse Huethawali's southern and western slopes, eventually reaching Spencer Terrace. The cross country gets easier at Spencer Terrace, and you can find nice smooth slabs by cheating to the west. About halfway across the Terrace, you'll pass 'The Rock Garden,' a collection of large sandstone boulders sprinkled across the slabs, looking like glacial erratics in the Sierras. Continue up and over a small rise to reach a Promontory and the start of the scrambling. 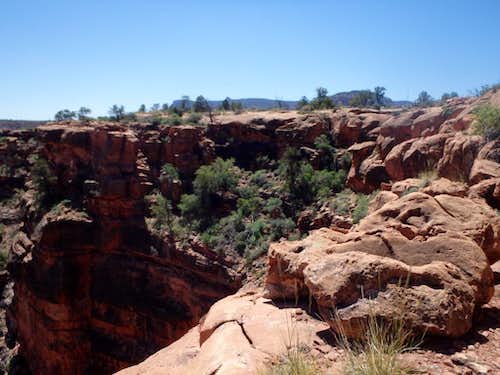 The top of the scrambling. Descent crack right of center.
The Route: The route is complex, confusing and definitely requires some patience and assumed backtracking. Here's a rought outline, YMMV: From the point farthest north on Spencer Terrace, hike southeast along the cliff edge about 20 yards to a cairned crack which drops through the first cliff band about 50'. Traverse the brushy ledges north to either a number of class 3-4 cracks that drop down to the next level or a large sandstone flake leaning up against the cliff with a bunch of small boulders wedged between that can be scrambled down. Descend the brushy slopes another 30-40' or so and look for a relatively smooth class 3 drainage slightly to the north to get yet another layer lower. From here there are two main options- continue traversing north and drop down several layers through some tougher class 3 cracks to the top of a broad, boulder strewn gully, or reverse course back to the south, using some easier class 2 lines to get to just above the final major cliff band. If staying south, traverse just above the cliff band back north where you'll meet up with the cairned route halfway down the broad gully at the crux of the climb. 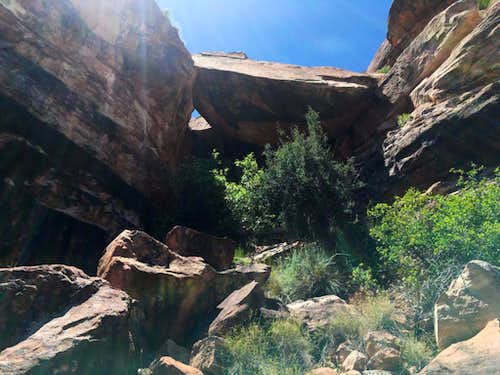 Beneath the crux.
The crux: To descend the final series of cliffs, you'll need to drop underneath two massive boulders wedged together to form a large tunnel. Beta suggests this crux is class 3, although I suspect a few holds have broken loose since the original rating and I would personally put it more at class 4. There are at least 3 different openings you could try, although I found the easiest option to be to a smaller opening to the left of the main opening, which has some serious overhang. This opening has two small ledges partway down which are slanted a bit awkwardly. There are some footholds out of sight below, you'll kind of need to feel for them as you go. Some very careful stemming and ungraceful squirming should get you safely to the base. Another option is to try to use narrow slabs to the left of the boulders to descend next to them. There is a thin move that I bailed on given lack of handholds, but wouldn't be bad if you had a spot or a handline hanging from above. Once through the tunnel, continue down the gully down one or two more steps, then traverse the remaining distance north to the small anticlimactic (in terms of size, not views) summit.
Several entries in the summit register suggest that one or two parties have climbed it from the Tonto Trail 1500' below, but I don't know the logistics of that route. 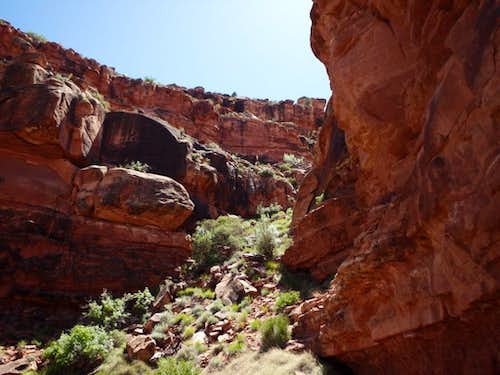 Gully above the crux.
This hike is entirely on NPS land, and technically a permit is required for any overnight use in the area of South Bass Trail including the trailhead, which has several nice campsites. That being said, this area is not frequently patrolled, and you could probably get away with camping there and not picking up a permit first- up to you if you'd like to risk it.
Crossing through the Havasupai Land is another issue. While most information online and even a sign at the gate suggests a $25 fee to pass through (which to be fair, is cheaper than what the NPS charges for entrance these days), based my most recent interaction with a tribal member at Dodd Tank, the Havasupai now expect you to call in advance to make a reservation to pass through, and seem to charge a similar fee structure as Havasu Falls- per hiker/ per day, even if you're on NPS land the entire time. I can not find this information anywhere else, and it may have been a misinformed tribe member, but something to be aware of if you're planning a trip to this part of the Grand Canyon.

As with most hiking in Arizona, Fall and Spring are the best. Summer can be brutally hot, and this peak has significant cross country with no water sources, including the rim. Winter can bring serious ice on the upper portions of the South Bass Trail, although microspikes should work fine in an average year. A good winter storm can easily make the road impassable with mud, so it might be worth waiting for the roads to dry out after a major storm rolls in. This area of the north rim can be popular with Elk hunting in the fall, so it may be something to bear in mind if you don't like the sound of shotguns ringing when you're exploring the canyon. 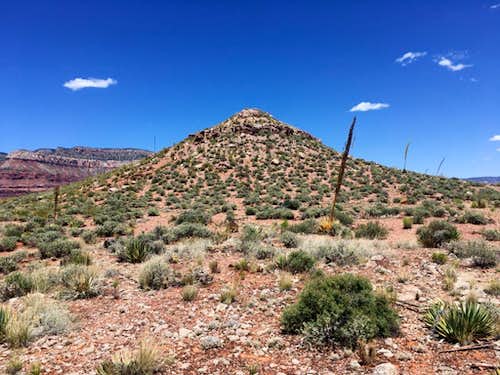 This entire area of the canyon is considered at-large backcountry camping including the trailhead, and permits are required by the NPS. There are also some really nice spots along the rim near Signal Hill, heading towards Havasupai Point. The closest water is the Colorado River, so bring more than you think you'll need, car trouble would not be unheard of given the condition of the roads.