Marion Point is a rather interesting, narrow summit located off the eastern edge of the North Rim along the famed Nankoweap Trail, an old Native American route improved upon by John W. Powell himself. The point, named for Prescott based publisher John H. Marion (1835-1891), serves as a major checkpoint for those hiking the Nankoweap Trail to the river and back, and a small camp above Marion Point's ridgeline is the first feasible campsite along the trail after leaving the rim.
Given it's low elevation in comparison to other North Rim summits and the ability to utilize the Nankoweap Trail for much of the approach, Marion Point avoids the brush that plagues most other North Rim peaks and provides a very fun class 3 scramble to the airy summit, jutting into the Nankoweap drainage and Eastern GCNP.

The Nankoweap Trail and Marion Point can be approached from two different trailheads- the Saddle Mountain Trail off the North Rim, and the House Rock Valley Trail, which is lower in elevation and provides winter access.
For the Saddle Mountain Trail: From the town of Jacob Lake, drive south about 26 miles until reaching Kaibab Lodge. Just past the lodge are a pair of Forest Service roads, with FR 22 going right towards the Kaibab Plateau HP, and FR 611 headed towards Saddle Mountain and Marble Canyon Lookout with a sign labeled "Viewpoints." Turn onto FR 611 for 14 miles, ignoring the various side roads including the signed turn off for the Marble Canyon Overlook. The dirt road is in decent shape and should be manageable by most passenger cars with a bit of patience. The road ends at a turn around and the trailhead for the Saddle Mountain Trail.
For the Rock House Valley Trail: From the town of Marble Canyon, drive west for 21 miles and turn left onto Buffalo Ranch Road with signs for the Rock House Valley wildlife viewing. Follow this road for 29 miles ignoring the various side roads until the Rock House Valley Trailhead.

Saddle Mountain Approach: The approach starts by descending the Saddle Mountain trail, which quickly reascends Point 8881', the highest point on the North Rim. The Saddle Mountain trail is a bit overgrown, so pants are highly recommended for this trail. The trail descends from this highpoint over and around several bumps along the ridgeline to the saddle between Saddle Mountain and the trailhead at about 7,500' where it intersects with Rock House Valley approach about 2 miles in. The two join together to become the Nankoweap Trail just above the saddle.
Rock House Valley Approach: From the trailhead parking area at about 6500', follow the trail for 2.5 miles as it ascends a north ridgeline to the saddle where it meets the Saddle Mountain Trail coming off of the north rim. Although you start the day with an ascent, the total elevation gain between the two approaches is basically a wash since you'll need to climb back up to the rim on the way out. 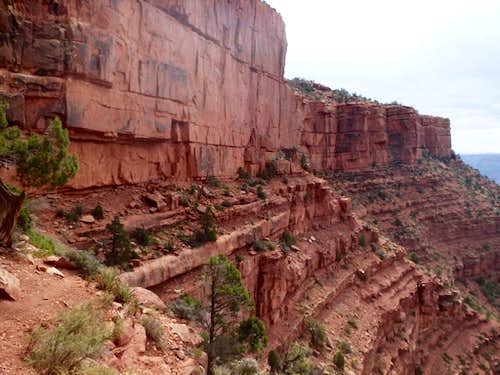 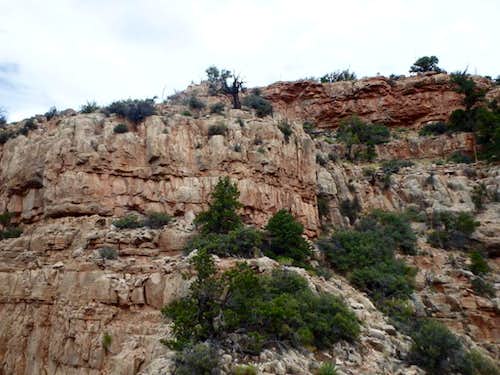 Looking back from the class 3 notch.
Regardless of the approach, continue along the Nankoweap Trail down several switchbacks before leveling off in a narrow band of Supai. The route, although fairly level, is very narrow in spots with 100+' drop offs and packed, poorly maintained trail. The trail traverses this cliff band for about 2 miles until reaching the Marion Point camp perched on the ridgeline just above Marion Point. Although fairly obvious, the small campsite is marked by a series of 40-50' sandstone pinnacles jutting off of the ridgeline to the immediate south.
The Climb: From Marion Camp (a good spot to cache water for the return trip out of the canyon), traverse on the west (right) side of the pinnacles, stemming down a few large sandstone blocks to get one cliff band below. Stay fairly high along the ridgeline, heading directly down hill towards the low point between the Supai ridgeline and Redwall Limestone of Marion Point. There are a number of small cliff bands that can all be easily avoided by various easy class 2-3 breaks, never more than a couple feet. The notch between the ridgeline and Marion Point is surprisingly steep, and requires a downclimb of a short 15' gully to the immediate east (left) of the point looking down at the notch. A narrowing crossing of the notch leads to the crux, about 10' of steep class 3 with plenty of large holds. Once up this notch, head right to a class 2 ramp through another series of cliff bands, topping out on the first false summit of Marion Point. This drops into a narrow but class 1 isthmus, which is then ascended over one more false summit to the highpoint, which can be obtained with some class 2-3 sticking to the airy ridge, or traversed along its' east side with some brushy class 2 to the high point.

Admission to GCNP is $30 for 7 days, although this trail starts on NFS or BLM land and it's not like anyone is standing at the boundary near the start of the Nankoweap Trail to collect. If visiting the park proper, I highly recommend the "America the Beautiful" Pass for $80, which covers the entrance fees for all federally managed parks and land for one year.
No additional permits are needed unless you're planning on incorporating this into a backcountry trip. The Marion Point campsite would be an obvious place to camp, and water is intermittently available via a small seasonal seep about 150' beyond Marion Point along the Marion Point, just above the trail. Check with the NPS for water conditions before you depend on it. 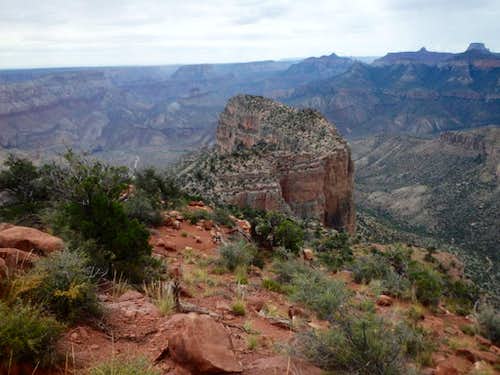 Class 2 along the Supai ridgeline

As with most hiking in Arizona, Fall and Spring are the best. The north rim is one of the few parts of the state with reasonable temperatures in the summer, although the trail descends to a bit over 6,000' into the hot canyon. Afternoon thunderstorms are a possibility daily, and you are very exposed once leaving the relative safety of the Nankoweap Trail.
The approach from the Saddle Mountain Trailhead off the north rim is gated off from Jacob Lake in the winter, although the approach from Rock Valley is open year-round. The Nankoweap Trail is mostly south facing and unlikely to hold snow any time of year. 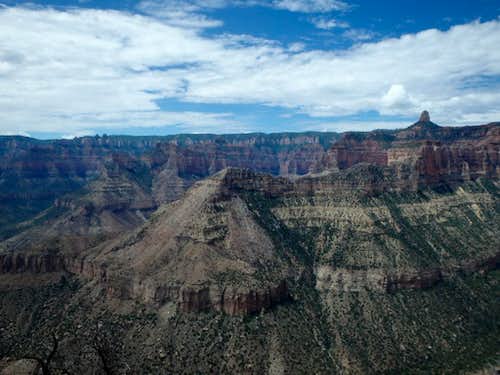 View west from the summit.

There is plenty of places for camping at large in the National Forest just outside the park including the Saddle Mountain Trailhead, where you can camp directly on the rim. The Demotte Campground is located near the Kaibab Lodge just near the turnoff onto FR 611. There is also several developed campgrounds in Jacob Lake, as well as the North Rim campground within the park. 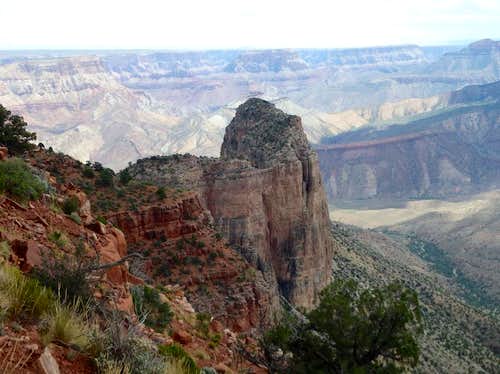