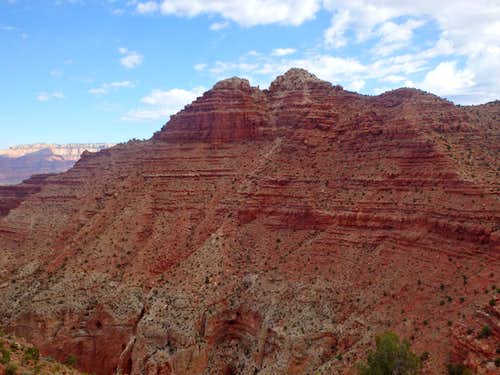 From Tanner Saddle
Looking out from Mary Colter's famous Watertower at Desert View is an impressive series of buttes lining the Colorado. They're included in 1000s of sunset photographs from the tower every year, yet few know their names, let alone consider climbing them. Two of these buttes, Escalante and Cardenas, make for fun scrambles and a chance to explore a part of the canyon away from the congested Bright Angel area. These probably see about 5-8 parties per year so expect some solitude.
The two can be linked up with a pretty straight forward traverse, with a small butte in between, affectionately known as Escaldenas Butte.
What makes the traverse so special is that Escalante is just high enough to break into the layer of white boulders of Coconino Sandstone as the summit, while Cardenas's lower summit is red blocks of Supai sandstone, making the two adjacent summits very different.

Enter Grand Canyon National Park's South Rim either via US 180 to the South or US 89 from Cameron. Make your way to Lipon Point just west of the Desert View area. The signed Tanner trailhead is a short walk back up the road from the parking area.

Trip Statistics are for an Escalante- Cardenas traverse, YMMV.
Mileage: 9.2 miles roundtrip
Elevation Gain: 3200' (nearly 2000' on the return)
Crux: class III
Approach: To get to the buttes requires a painful descent down the Tanner Trail, which is significantly steeper than the Bright Angel Trail, and poorly maintained, with a few sections washed out. Once you wind your way out of the canyon, Escalante will be directly in front of you the majority of the descent. The goal is to get to the base at a saddle at roughly 5,600'. From there you have two options: 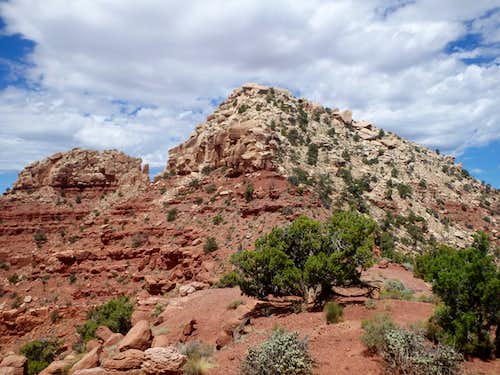 Looking up the ridge on the descent.
ESE Ridge: From the saddle you can ascend the slopes directly in front of you to make the ridgeline that heads directly towards the summit. There are some bands of Supai sandstone to contend with about halfway up, so initially cheating to the east and aiming for the obvious saddle between two false summits on the ridge should keep things more or less class II. Once you've obtained the ridge, it's a straight shot up towards the summit. Aside from the occasional sandstone block to overcome, the ridgeline is fairly easy until you encounter the white Coconino sandstone. I found the lower reaches of the Coconino could be bipassed on the north side of the ridge virtually until the summit blocks. 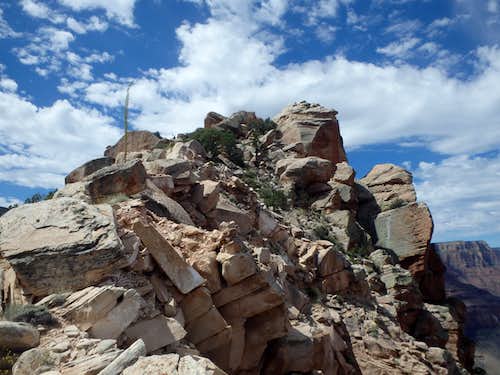 North Ridge
North Ridge: This route makes the most sense if  you're linking up with Cardenas. Continue on the Tanner Trail into a broad basin formed by Escalante - Cardenas ridgeline. Head towards the saddle cross country between Escalante and Escaldenas Buttes and follow the North Ridge directly. If descending from Cardenas, you'll probably need to drop off the ridgeline to the south higher up on Cardenas due to some sandstone ledges.Similar to the SE Ridge, the lower slopes through the red Supai sandstone are steep but easy, with no real difficulties until breaching the white Coconino. The North Ridge had some huge, 30' boulders to work around, and had a bit more class III. I did encounter a pair of nesting California Condors near the summit, so if you encounter them again, please give them a wide berth so they don't abandon their nest. 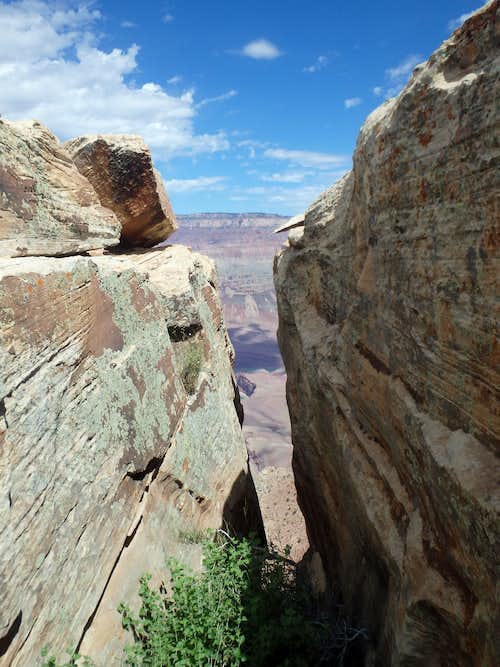 The lower half on the left, higher on the right, a straight drop off at the far end.
The summit block: The summit block is a very impressive 20' high white sandstone boulder that has been cleaved in two pieces, which are both hanging over steep slopes to the north. The key to the summit is climbing the lower, western piece of the summit block and leaping to the higher side. The lower block has been rating class IV by some, but the exposure really isn't bad and there's good holds, so I would put it at average class III. The gap between them is only about 3 feet at its shortest point, but the narrowest part also hangs over the cliff, so the exposure on the hop over will tie your stomach in knots. I cleaned the landing areas when I visited. It is worth mentioning that the landing area on the lower side to get down is much smaller, so size things up before getting trapped on the higher block.

As with most hiking in Arizona, Fall and Spring are the best. Summer can be brutally hot, and water is an issue on this hike. Plus there is little cover should an afternoon thunderstorm roll in. Winter can bring ice on the upper portion of the Tanner Trail which stays in the shade all winter, and microspikes are a good idea.

There are two developed campgrounds on the South Rim: Mather (which takes reservations) and Desert View.
Per the NPS on backcountry camping off the Tanner Trail: As part of the ongoing efforts to salvage plant and animal habitats that revolve around what remains of the old pre-dam sediments near the river, the large sand dune at the mouth of Tanner Canyon is closed to visitation. With this exception, the Tanner Canyon Use Area (BB9) allows "at-large" camping. There are nice (although dry) established campsites at the Seventyfive Mile Creek - Tanner Canyon saddle, trailside in the Supai, above and below the Redwall, and in the Tapeats. Campsites near the river can be found on the east side of Tanner Canyon. A composting toilet is located nearby.
The only water source is the Colorado River.
There is plenty of places for camping at large in the National Forest just outside the park.