Kyes peak is the highest summit in the Monte Cristo Group and is very isolated from civilization. When the weather is good this peak offers views of the many famous peaks in Washington including Sloan Peak, Mount Pugh, Baker, Rainier, Glacier Peak and many more. This peak is pretty much in the middle of the Cascade Range.

This peak gets much of its fame from the well known Blanca Lake which may be considered by some folks to be one of the most bluish green lakes in the state of Washington. Just getting to the lake along by many is worth the visit to this mountain. This takes most people at least most of a day and is not very often climbed. But considering that it is considered a challenge, it makes sense. But for the die hard fans, its no problem. There is a register on the summit which was install in 1997. There is some bushwhacking involved with some mild exposure at times. The summit block is a class 2 (some say class 3) scramble on a slab with ledges to traverse. 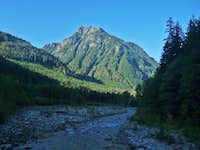 Bear Mountain on the Way
View Directions from Google Maps Here. All you have to do is type in your location in the starting field. (Change it from Seattle to the city you live in) Be sure your route is going through the city of Skykomish. If it's not, drag the purple route line toward Skykomish.
Getting There from Seattle: Head East on Highway 520 (exit 168B) to get over Lake Washington. In 6.6 miles you take the exit that goes onto I-405 North towards Everett. In 9 miles take a right onto Highway 522 E towards Monroe (exit 23). In Monroe the highway curves around and merges onto highway 2, be sure to take a left (East) towards the city of Skykomish for 35 miles. In the city of Skykomish you will see on your left a road called "Beckler River Road" which you turn onto. As you travel though the valley the road turns into NF Rd 65 which continues to travel north up the valley. Later on after going down hill a ways you will reach a fork in the road which you will want to take a right onto NF Rd 63. In about 1.9 miles you will want to take a left (straight) up the steep road to the trailhead. Don't worry, if your car for some reason cannot make it up this hill, it's only 150 feet or so from the friendlier road.

The trip starts out as a gentle well maintained trail through the woods which eventually steepens with switch backs up the mountain. In about 3 miles (2,700 feet of gain) you arrive at Virgin Lake (at 4,600 feet elevation) which it is small but a beautiful lake. One might consider filtering water at this location (not sure the quality of the water) because there is much travel on the pathway ahead. 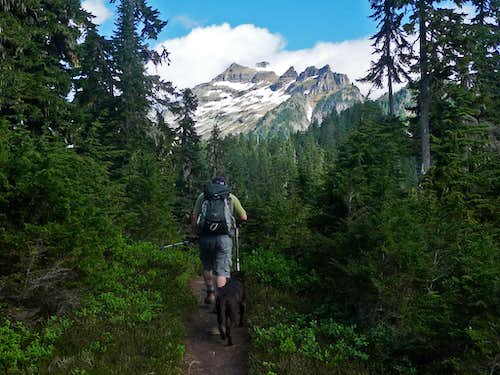 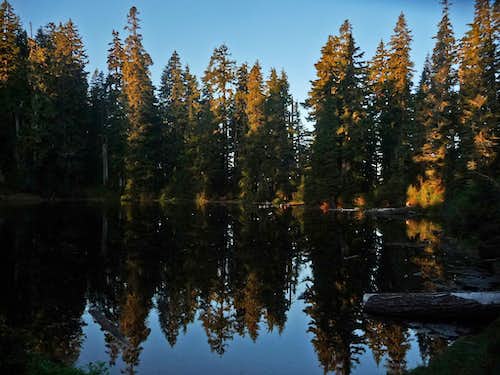 Just past the lake look for a small tree with a blaze cut into it which is on the right hand side. If you don't find it, no big deal, but to make travel nicer try and find the climbers boot path that goes up the ridge/saddle towards Kyes Peak. The pathway starts out easy to follow but eventually fades in and out in some places. You do encounter a few areas that contain some mild scrambling, but no problem for the average mountaineer. For much of the time you are traveling on the right side of the ridge (East Side) which you eventually end up on the ridge crest itself. This flattens out for a while until you go back down the ridge and encounter your first obstacle of the trip. It is a rocky point on the ridge with cliff bands and potentially dangerous terrain. On a map it is labeled as point 5800. 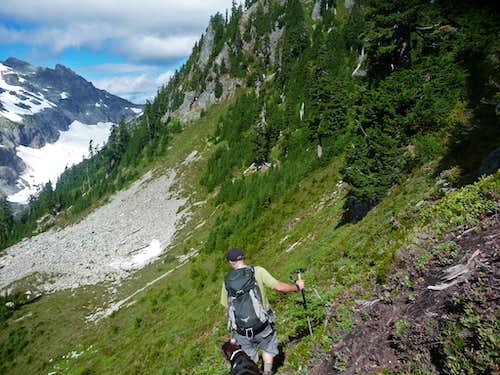 Head Down towards the Boulder Field to the Left

So now we want to avoid this terrain by going down to the left towards a mini boulder field. This spot is easy to find any time of the year because it is mostly flat when you get there. Be warned, in later season this is where the blueberry bushes start up which often times is slippery making travel a little bit more tedious. So now traverse the mountain going slightly up hill towards your right until you think your a little ways beyond Point 5800. Then starting heading almost directly up, if you encounter a cliff band, you have to keep traversing. 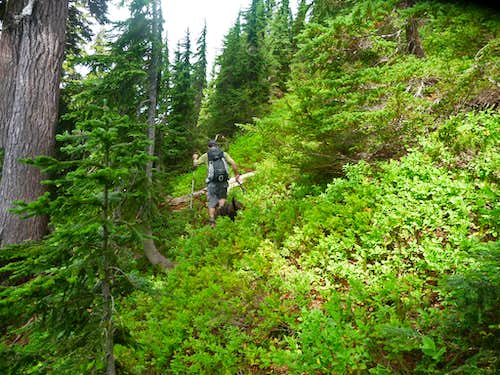 The Easier part of the walking through Blue Berry Bushes

Depending on where you end up you may get either onto the ridge again or at the notch which is on the ridge. Either one is fine, but the ridge is probably the better option. You may get lucky and find a rigged trail that switchbacks up the mountain, if not, no big deal. But you do want to make sure you don't end up on any unnecessary terrain. There should not be any terrain beyond class 2 until you get to the summit block.

Once you start getting glimpses of Kyes Peak and of the boulder field, you should head towards it. But do keep in mind there are some cliffs below between you and the boulder field which there is a nice traverse "pathway" to the right which is a series of mini scramble sections down the the boulder field. 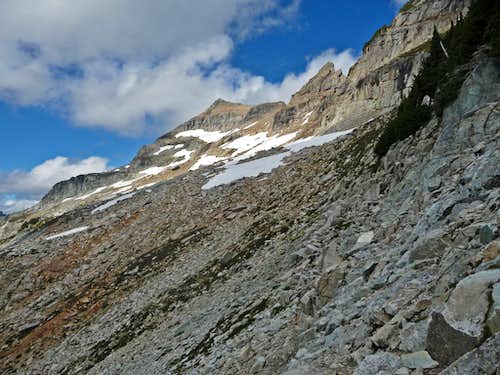 Even in late season much of the boulder field is covered in snow, which depending on snow conditions it might be time to take out the ice axe if you brought one, I personally was fine without one but the snow was soft. Head towards the false summit to the north, but eventually you want to curve to the right. You will see a section I call "The Gap" which is a small notch in the ridge between two high points.

The Gap (in real life it looks more Gap like) 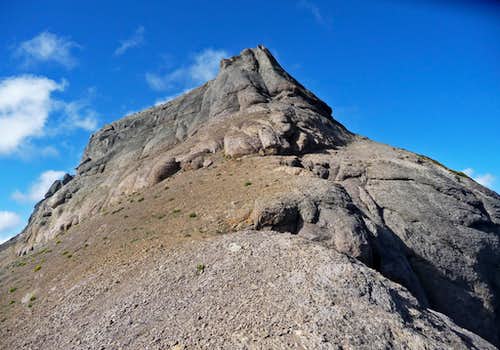 Round About as seen from the "The Gap". Head to the right of this section.

Once you scramble up to the gap you are back on the ridge again which doesn't look very ridge like at this point. Now go towards the round about and then to the right of it which takes you to a permanent snow field. If you like snow, take the snow field towards the summit block. If you like rock, take the ridge to your left which is nice and gentile although with a few ups and downs.

The summit is the one on the right which of course is the one farther away. But at least it's a cats walk from here. Once you get to the summit block it is considered class 2, perhaps class 3 depending on how you rate a route. I will admit though that one should be cautious here because there is some loose pebbles and such on the rock making it a little more tricky. But for most mountaineers it won't be much of a problem. The summit pyramid is not as bad as it looks. Look for the crack that has nice foot holds which takes you about 20 feet from the summit. The last 20 or so feet carefully traverse over to the summit. From here you are rewarded with a great view of the area. 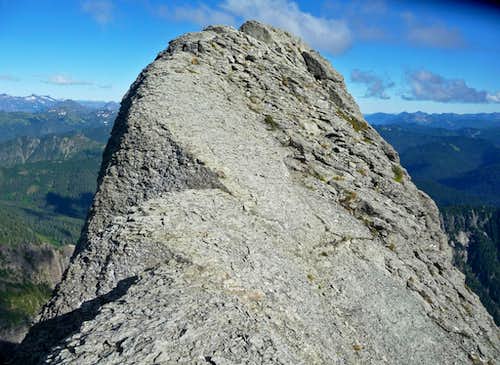 The Last Few Steps to the Summit 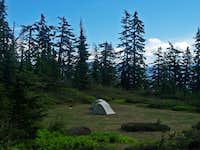 Camping in the Meadows

Keep Track of Time
A North West Forest Pass is required for parking at the trailhead. Also be sure to get down the mountain before dark because finding the pathway at night may be hard to find.

Good camping can be found near Virgin Lake or near the false summit.

There is often a nice place to filter water in the basin below the summit.

This mountain can be climbed year round, but is recommended between the months of June through October. Early summer is probably best because of all the blue berry bushes you have to travel over in later season. But the later months tend to have better weather. So it's debatable which you prefer and it also depends on the weather that year. 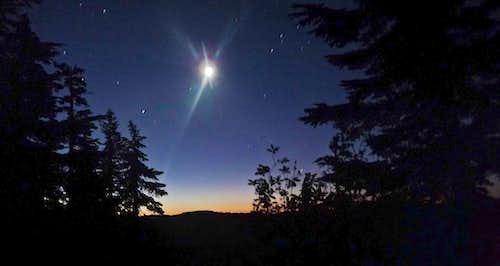 Get Down Keyes Before Dark 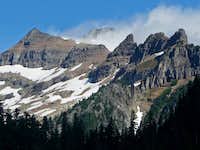 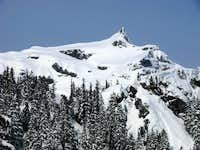 Kyes Peak during Winter
For weather information be sure to check in with the Noaa Forecast.

For road/trail conditions check in with the Forest Service Website and search for Blanca Lake. (sorry folks, there is no instant link that brings you down to Blanca Lake on the website)

Using Trekking Polls for the Approach 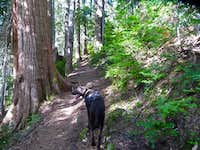 Dog Friendly (except for the summit) 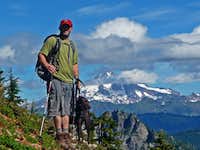 Kyes Peak was originally named "Goblin Peak" or "Goblin Mountain". However, the name was officially changed to "Kyes Peak" during 1944 in honor of U.S. Naval Commander James E. Kyes. Commander Kyes made the first recorded ascent of the mountain on August 15, 1920 with a Boy Scouts troop from Everett. Kyes died on December 24, 1943, when the destroyer "Leary" was torpedoed in the northern Atlantic Ocean.

Side Note: When the name changed to Kyes Peak, the name Goblin Mountain moved to a highpoint on the nearest ridge located east of Kyes Peak.

Special Thanks to SP Member Redwic for researching and wording the history section of this page. 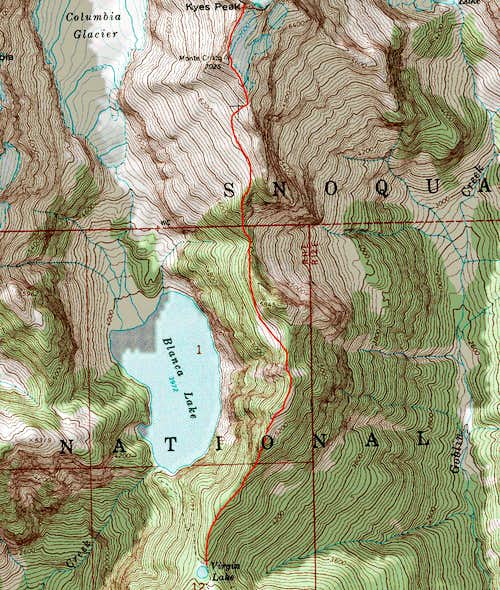 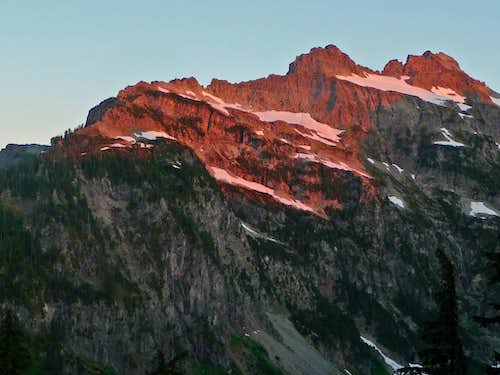