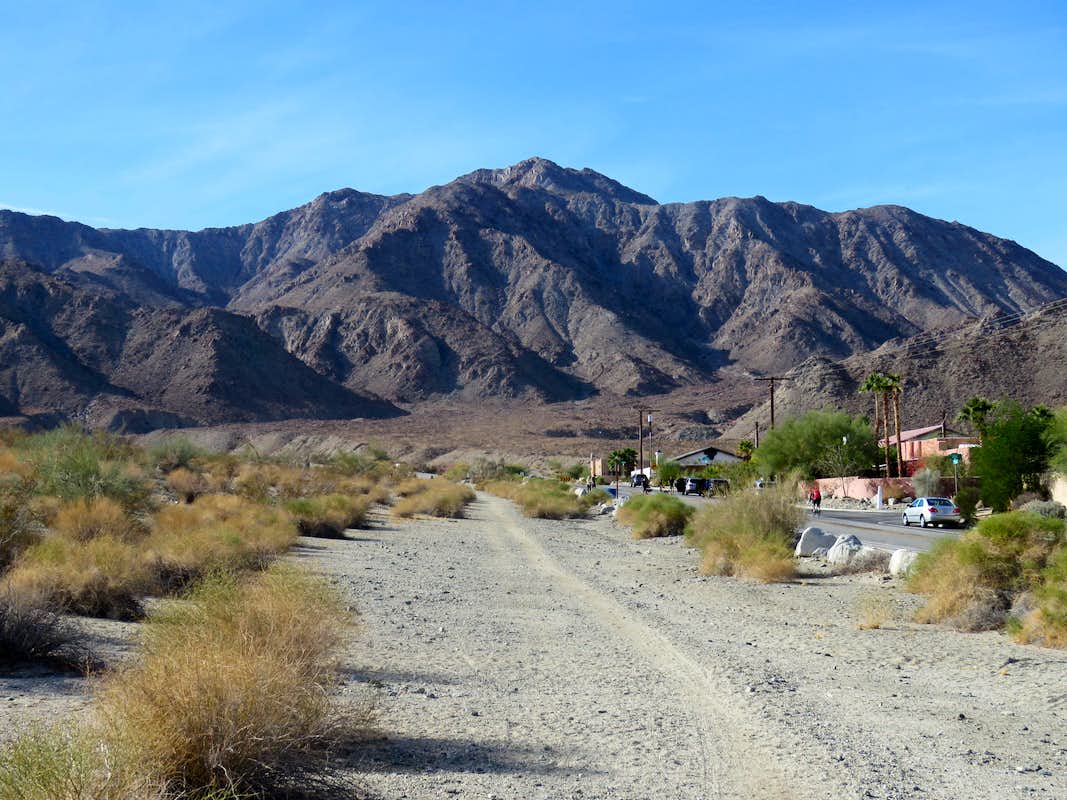 The east face of Coyote Benchmark from La Quinta, California

Coyote Benchmark rises above the community of La Quinta near Palm Springs in southern California. No trail goes to its summit. From the streets of La Quinta, I went to a 1500 ft high saddle between Coyote Benchmark and Indio Mountain, then found my way to the summit.

The summit of Coyote Benchmark provides you with fantastic views of urban sprawl in Coachella Valley. Major peaks of the area such as San Jacinto, San Gorgonio, Santa Rosa and Martinez will also be in good view. Salton Sea can be seen in the horizon.

A good place to park is at the designated parking area for Bear Creek Canyon Trail in La Quinta, CA (you will obviously not be following Bear Creek Trail).

From I-10 near Palm Springs, take Exit 139 to Jefferson St. and drive 5.75 miles south. Turn right (west) onto Avenue 52 and go 2.5 miles then turn left (south) onto Avenida Bermudas. Go to the end of the development where you will see designated parking areas on the left.

Looking west at Coyote benchmark from the parking area. From the parking area, I walked west along Calle Tecate Street to a concrete pathway know as Fred Wolff Bear Creek Trail. Left that trail and went across a dry wash with concrete slopes (there were stairs in the slopes). On the west side of the wash, I headed west toward the 1500 ft saddle between Indio and Coyote Mountains. Coyote Benchmark and the 1500 ft saddle on the right

I actually came across a trail but it ultimately seemed to go the wrong way. I left it and headed toward the saddle. Another faint beaten path appeared and I followed it to the saddle.
Point 2121 ft to the north of the saddle. Zoomed view of an eagle like formation far above the slopes. At the 1500 ft saddle, Mt. San Jacinto came to view to the northwest. Left the 1500 ft saddle and began hiking up the slopes of Point 2078 ft. Became pretty steep farther up.

The summit of Coyote Benchmark then came to view again. The thorny growth was fortunately sparse. Up the final slopes toward the summit. This path became a little scary so I found and easier way to the summit.

Winter is the best time to climb. Summer can get dangerously hot.