Named after mining engineer Alton L. Dickerson who examined the Monte Cristo mines in 1891. This peak stands east of the South Fork Stillaguamish River, just north of the Barlow Pass area on the Mountain Loop highway east of Granite Falls. The first ascent was completed by in 1897 be Louis C. Fletcher who was working for the USGS. The north face was first ascended August 21, 1970 by Dallas Kloke and David Seman via. the Perry Creek Trail. 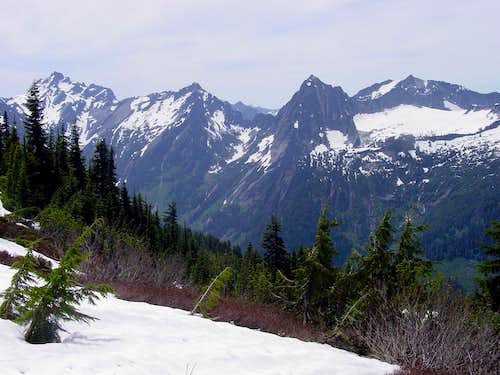 Del Campo, Morning Star, Sperry, and Vesper seen from the upper meadows
Officially named Dickerman Mountain but more commonly known as "Mount Dickerman", this peak is a simple hike, accessible in early season.  It is one of the most popular hiking destinations in the area, probably only second to the Big Four Ice Caves. The trail (trail #710) begins at 1710 feet and rises 4013 feet in 4.1 miles. There are many switchbacks after the first quarter mile with moderate elevation gain. 2 miles into the hike, the undisturbed forest changes into cedars and sub-alpine furs. During the summer, the next half mile is one of the most popular blueberry stashes in Northern Cascades. Be warned that the temptation to pick makes hiking progress slow-going. In the Fall, the colors displayed by alpine meadow wildflowers are stunning and brilliant. The meadows begin near 4500 feet and contain splendid views to the south. 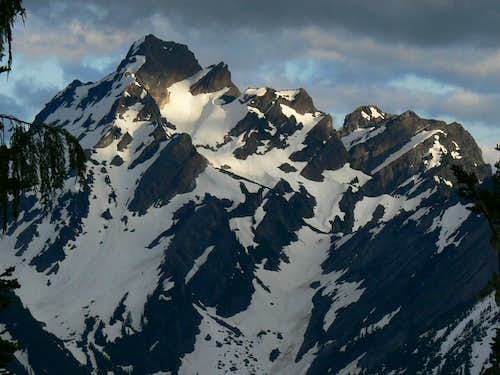 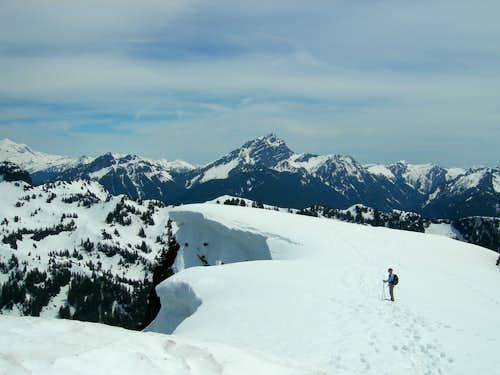 From Everett, take highway 92 east to the town of Granite Falls turn left (north) at the east end of town onto the Mountain Loop highway. 16.3 miles past the Public Service Center in Verlot there is a large trailhead parking area on the left side of the road. This is on the left side of the road, 1.6 miles beyond the Big Four picnic area. For more details you can purchase Green Trails Map # 111. Don't forget that a Northwest Forest Pass is required to park a car at the established trailhead.  Parking overnight at the trailhead is not recommended because break-ins have been a rare but occasional problem.

Snow can still be encountered in the month of May. It is more difficult of a hike in the winter months, and map and compass knowledge is required, as there are many cliff drop off's and large cornices. Crampons and Ice Axe are recommended in the early season. Snowshoes are a must. Even experienced climbers can make mistakes under heavy winter conditions. Unfortunately, 2006 proved to be a tragic year for Dickerman Mountain. Two seasoned hikers were killed on the mountain within a few days of each other on February 10 and February 19. PLEASE BE CAREFUL! Do not choose Dickerman as a winter day hike unless you are well experienced.  Also check the snow conditions on NWAC. 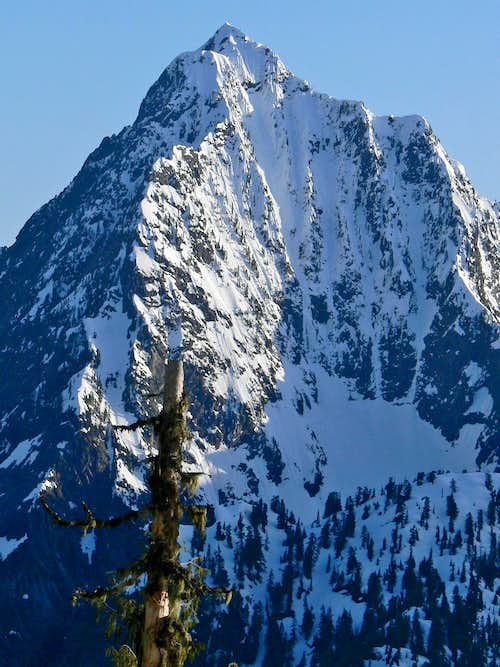 This is a high risk area for forest fires, so no campfires are allowed anywhere on trail or at the summit. A Northwest Forest Pass is required for vehicle parking at the trailhead ($5/ day, or $30 annual).

Officially no camping is allowed, but evidence suggests that it does happen. Please respect the mountain and help keep it pristine. Pack it in pack it out.  Parking at the trailhead is not recommended.  Break-ins are rare, but they do happen occasionally. 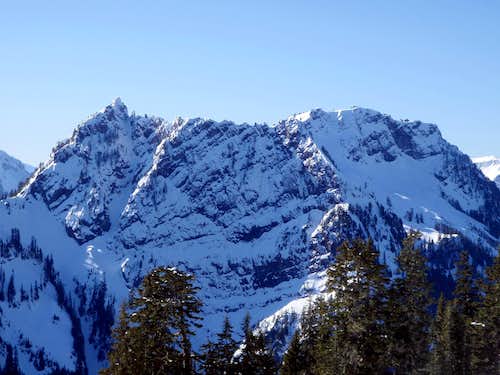 The north face of Dickerman seen from Stillaguamish Ridge 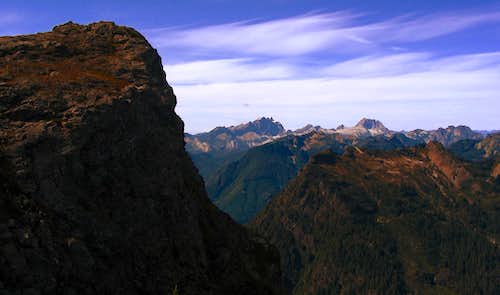