East Mountain is tucked away in the middle of Emery County and is only significant because it is the highest peak there. East Mountain is mainly of interest to county highpointers and locals who visit the area. Emery County's has a population of 10600 people (as of the last census) and Castledale is the largest town with a population of 1657 although Ferron is almost as populated with 1653 residents listed. If you look close at this linked table, you will see the name of Molen, a place where some of my ancestors settled and tried to make a go of it. Ok, ok, back to East Mountain.

At 10743 feet high, East Mountain is one of the  highest peaks on the Wasatch Plateau over 10,000 feet of elevation. A good view of East Peak is available from So. Tent Mountain as is shown on the signature picture. 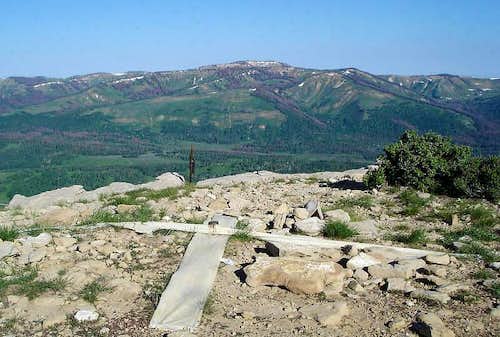 View west to So. Tent Peak

Getting There / The hike

The easiest access is from Castledale Utah which can approached by going north on highway 10 from I-70. You can also approach Castle Dale from the north by heading south out of Price, also on highway 10. Head West out of Castledale-Orangeville by taking Utah highway 29 to Joes Valley Reservoir, a paved road. From UT-29 at Joes Valley Reservoir, take the Miller Flat Road north and follow signs toward Indian Creek Campground (turn right after about 7 miles, then left after another 0.7 mile). After a total of 10 miles, the campground appears on the left. Pass by the Campground's main entrance and cross a cattle guard. The road continues through cow pastures and gradually worsens. This would not be a road I'd want to be on if it rains as it would turn to really bad mud in no time at all. Best time to do this one would be July to October.  It might be wise to check with the Ferron/Price BLM office to get their input about the condition of the road past Indian Creek campground as some have mentioned problems with the road at certain times.
---------------------------------------------------------------------
From the north:
SP member Prince of Norway (see his log entry as of July 2014) offered this:
"PrinceOfNorway
For those of you coming from the North to bag this peak during summer months, I'd like to offer an alternative route to arriving at the trail-head. Take Highway 6 up Spanish Fork Canyon like normal, but hit Highway 89 to Fairview. Head east on UT 31 (SR 31) up the canyon for a very pretty drive. You will pass the Mammoth Discovery Site. When you pass the site will know you are getting close to Forest Road 0014. Forest Road 0014 is between Huntington and Cleveland reservoirs on your right (south). This road isn't paved, but it is maintained gravel. 0014 will lead you passed Miller Flat Reservoir and to Forest Road 0017, which will be on your left (east). It runs directly east across the little valley for maybe a quarter mile where it comes to a threeway stop. There is a sign for Indian Creek Campground from here telling you to turn left (north) which will keep you on 0017. Don't make anymore turns and this will lead you directly to the trail head."


The Hike starts from either place and the trail is easy to follow. At a junction as the trail meets up with a trail ascending from the north. You'll see some tanks on your right (near where the spring is marked on the topo) and the trail continues past them and goes to the right (southeast).
In a short distance, the trail forks again, take the right fork which heads up fairly steeply for a bit but soon comes out of the trees and onto a grassy slope. Take the grassy slope to the top but be sure to remember where you came out of the trees to make your return to the trail easier.
The trail disappears into the grass but it is obvious as to where you want to go.

Highest area of East Mtn
The top of East Mountain is somewhat rounded and flat but the views to the west and north are very nice. The actual highest spot is near some bushes about 130 feet south of where the benchmark is found.

If parking lower, than add about 1/2 mile round trip and an additional
300 feet of elevation gain.

No permits or other regulations to be noted at this time.

East Mountain is within the boundaries of the Manti-La Sal National forest.
For more information about conditions on the Wasatch Plateau area, consider calling:

The two nearby campgrounds are:

Joe's Valley Reservoir Campground (more on Joes Valley below). This one is just a few miles from East Moutain and more info can be found HERE.

Indian Creek Campground is really close to East Mountain but a recent renovation of the campground converted all sites to group campsites, not very useful for just a couple of people. For more info, click HERE.

We camped just off the road a little north of the Indian Creek campground and it was fine for just car camping.

Emery County was named in honor of George W. Emery, governor of the Utah Territory in 1875. Its county seat is Castle Dale and the largest city is Huntington. It is one of those counties where the population is expected to shrink as in the year 2000 the population was 10,860, and by 2005 has been estimated to decrease by about ten percent. Now that it is 2007, it would be interesting to see if this has happened.

The Fremont culture was one of the earlier civilizations of this area and you can learn more about that if you click HERE.

See the pic and the story link

A ton of good information can now be found on the Joe's Valley area
at this well done Summitpost page:

Joe's Valley Check it out.

Books
High in Utah
Hiking Utah's Summits
Neither book follows the route we used in getting to the summit and from looking at both routes, I think the best route is the one offered by what you see in my map. This route provides a trail most of the way versus no trail as outlined in the books. Your choice. High in Utah gives road directions from both Joes Reservoir and an alternate drive in route from Fairview.

Trail Name and how to get there.

In driving to the trailhead you will use Miller Flat Road. A turn to the east on to Forest Road 17 will take you to Indian Creek Road. Go north on Indian Creek Raod and pass the Indian Creek Campground. It is 3 miles north from the campground to the trailhead Here are some more helpful distances. It is 0.7 miles on FR 17 to Indian Creek Road. Go North on Indian Creek Road, in 0.6 miles you will drive under a huge Power Line., and in an additional 0.6 you will notice the left hand turn to enter the campground. Just keep going north (don't go into the campground). 0.3 miles after you pass the campground the road will deteriorate and no longer be gravel. A vehicle with good ground clear is advised. A truck or a Subaru Outback will be fine to drive this last section to the trailhead, but a Honda Accord (for example) will bottom out. 1 mile after passing the main campground you will notice an unimproved camp spot on the right. Exactly 2.0 mile from the campground you will come to a barbwire fence with a gate across the road, that you will have to open. From that gate it is 1 more mile to the trailhead - halfway along that last mile of driving when you come to a Y in the road stay right. 0.1 miles from the trailhead you will notice a sign on the left, at the bottom of a hill. The sign says "Spoon Creek Spur Trail 392", and "East Mountain Trail 085". Park here, or drive up the hill and park. From the top of the hill walk east on Spoon Creek Spur Trail, which will enter some Aspens and turn SE and start climbing. After about 0.75 miles the trail will turn to the North (away from East Mountain) and if you are like me you might not like the feeling of heading away from your destination, but stick with the trail nonetheless. Topo maps label "Spoon Creek Spur Trail 392" as "Jeep Trail". Spoon Creek Spur Trail 392 takes you to the saddle between Point 9775 and East Mountain. On the saddle you will encounter 3 or 4 water troughs (the write up calls them water tanks), these troughs are feed by the spring mentioned in the write up. At this point you are on the north side of East Mountain, so head south on the East Mountain Trail to the summit. There is even a trail sign at the water troughs pointing the way to the summit. On the summit of East Mountain you will find two Bench Mark survey markers. Bench Marks always have a triangle symbol in the center but they don't necessarily mark the highest point, and in the case of East Mountain they certainly don't mark the highest point. A piece of rebar, about 100 steps from the bench mark residing in a piece of metal pipe above the ground, seems to be the high point. The other bench mark is west of the pipe one and lists an elevation of 10730 feet. The pipe one is field stamped with "East" and "1937".