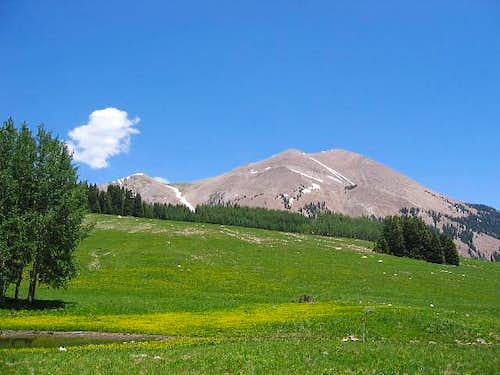 Hopefully, this page now serves as an easy way to find summitpost pages that have been created on Utah county highpoints. Only one county highpoint remains without a dedicated page but even this one, a liner (Wasatch county) which does has a route page which will aid you if seeking information and pictures about it.

Many of Utah's county highpoints are less than exciting as far as challenges go:
Carbon's Monument Peak, Iron's Brianhead, Millard's Mine Camp Peak, Emery's East, Wasatch's liner, Kane's liner and Wayne's Bluebell Knoll but all have interesting aspects and are worthwhile in their own right. Brianhead's views are outstanding and just getting to Bluebell Knoll is an adventure in itself. Many others are challenges to get to but all of them together will let you experience Utah in a unique and special way. You'll never forget the mini adventures all will provide you with.

Utah's county highpointing got a big boost by the publication of two books,
High in Utah and Hiking Utah's Summits. Of the two books, the High in Utah book is the better purchase. One of the best sources of information on the County Highpoints of Utah can be found at www.cohp.org

However, Utah has outstanding county highpoints such as Kings Peak, Mt. Nebo, Ibapah Peak, Deseret Peak, Mt. Peale, Mt. Waas, American Twin and Mt. Ellen
Check back from time to time as I work on this page. 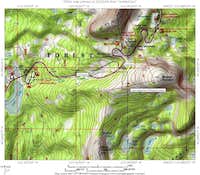 I parked just below the Bald Mountain Overlook (roughly 28+ miles from Kamas) and started from there. I had pre-loaded GPS coordinates and that helped me tremendously. A little cross country effort of maybe 15 minutes found me soon in the correct area (lots of rock and talus) and I began my search for the HP. I quickly ruled out the Topozone co-ordinate and used the directions given by Edward Earl in his report. I saw several cairns in the area but all but two seemed off the mark (in my opinion of course). A large one to the north was actually a bit out of the area and I GPS'd each one and have listed them below.

Two of the closest were rather interesting. One simply consisted of about 16 stones placed in an arch shape and the other was on top of a rock with a good view of a pretty lake down below. This was the cairn put up by Gerry and Jennifer Roach along with Dave Covill and it came complete with a small pill bottle register. In my searching for the true HP, I felt it was close to these two mentioned cairns (see below). The closest one to the correct spot in my opinion was the large cairn put up by Gerry and Jennifer Roach and Dave Covill. I found the small pill bottle with its register and found three entries which were:

I signed in below good ole "T-Bone".

So, the spot that I felt was highest and still within Wasatch county was here.

I took the following GPS-derived coordinates for the cairns found there:

I didn't take the time to climb up to the summit of Mt. Murdock or Mt. Cardwell (nearby) but I recommend reading Edward Earl's trip report as well as this message.
Don't forget to take in the scenery of this area, it is varied and amazing. Some great stuff as you head back towards Kamas.

A 3 dollar fee per day is levied on cars that park anywhere along the highway unless you have a Golden Age Passport which gets you a freebie by just displaying it on your dash.

Time spent in the HP area, one hour. 1/3rd of a mile to the HP and less than 300 feet elevation gain.

High in Utah (a book about the county highpoints)

Mountaineering in Utah by Michael Kelsey It has a short section on North and South Tent peaks.

State Completers (thanks to www.cohp.org)

Jobe Wymore has completed all of the Utah county highpoints TWICE.  Mine Camp Peak in Millard county was his 2nd time around finale on 6-30-2014


Please email me if your name has been left off this list or you know of someone who has completed the state.

Update: In a post at the cohp forum, it was noted that Alan Isaacson completed the state at Box Elder cohp of Bull Mtn but perished on the descent when he was caught in bad weather (march 2008). A reminder that the mountains can be insensitive to our goals and dreams. Below is a copy of the notice that is referred to in the post above:
"Dear Sir,

My cousin, Alan E. Isaacson, was a county highpointer that I would like to see acknowledged on your web site. His final county, Box Elder, Utah, was completed March 30, 2008, where Mr. Isaacson perished in an unforeseen snow storm on his descent down the mountain. His body was recovered the following day by authorities and hiking companion, Jim Turner. Accomplishing all 29 counties was very important to Mr. Isaacson and would place him as No. 37 on your completion list. Would you please consider noting Mr. Isaacson on your list as No. 37 as this was his final accomplishment in life. This would help bring closure to a difficult loss for us, and would give proper recognition to a gentle soul.

Thank you for your consideration.

A 35 year old man who was attempting to do all of the Utah county highpoints in the same calendar year  lost his life when he was descending American Forks Twin Peak (Salt Lake County) in August.  He had as I understand it, only three or four left to complete the state and  my condolences go out to his family.  His loss is a tragedy and a reminder to each of us to be as careful as we can be when we are hiking or climbing in the mountains.

Sure you can get to the summit by driving, but this is by far the prettiest way to get there. I followed the route given in the book High in Utah. What a great book. The route starts at the Clear Creek Campground. Turn south and head down the ATV trail until you get to the Lake Fork Drainage junction. There's a nice big sign, so there's no way you can miss it. Turn right onto the trail, and you immediatley start climbing. Surprisingly, it is very green and lush as you follow the creek up the drainage. I noticed ferns and big leafy plants. Reminds me of the northwest. The trail stays to the left of the creek, but steadily climbs up and over a few little bumps, moving slightly away from the creek. After a mile or so, the trail starts to drop down towards the creek, and crosses it. This is a great place for a small break. I was completely by myself. I actually felt like I was in a wilderness area. Very cool. After the creek crossing, the trail climbs up and away from the creek. At this point, I ran into swarms of butterflies. They were everywhere! I couldn't help but stand there and gauk for a while. At this point, the trail peeters out. There are two choices. You can stay next to the creek, and battle tons of deadfall, and thick bush. Or, you can veer up and to the right and make your way through some very tall sagebrush. I chose the latter and started up the hill through the sagebrush. It was tough going. The hill wasn't too steep, but the brush was very thick and tall, making it kinda rough. After topping out, things open up some, and you notice a lone pine up ahead. Head for that across the flat, pass it and then you'll plunge into the forest. Just keep picking your way through the pines, aspens, and small clearings. Head in the same general westerly direction. Stay high and to the right of the drainage. To the right you'll notice some cliff bands above you. That's the north ridge of the drainage. Ahead of you, all you can see is forest, but it soon opens up. Once you come out of the last patch of forest, the view will surprise you. I was here on July 4th weekend, and I thought I was in Glacier! As you come out of the trees you'll be entering a beautiful cirque with sheer cliffs and lush and green in the bottom by Bull Lake. This lake is really a marsh. The cliffs had snow hanging off them, and Resevere Point juts out on the southern end of the cirque like a big tooth. It is an absolutely beautiful area! You'll pick up a trail here again off to your right going up the loose rock. Follow this up to the top and turn to you left, following the edge of the cirque, climbing and turning south at the same time. Through this area, there were deer-beds everywhere, and I scared two or three of them up. Once on top you'll be able to look back down the drainage you came up. This is the top of the Raft River Mountains, and it is very flat. You notice all kinds of roads crisscrossing each other, and you'll have to cross a barb wire fence. The summit is not recognizable, and you'll need a GPS to find the high point. I'm still not sure if I bagged it. Didn't have a GPS. Anyway, I continued on around the top of the cirque onto Rosevere Point and had lunch. Along the way, I found a coyote den. No pups , but lots o' poop! I was very surprised at the amount of wildflowers that covered the grassland on top. For my return trip, I went back down the way I came up. But, I'm sure it would be an interesting trip by going down the Resevere drainage. All together, it was a 7 hr trip, but I beleive it was only that long, due to the route finding and bushwacking. But what a great area to be in! Like I said, I was solo all day. And one other thing to note. Check yourself for ticks when you get done. I found three!

Thanks for your trip report of your hike. I put a link on the front page.

Hey Dean, Sorry I couldn't post any pics. When I did the hike I didn't have a digital, and I can't seem to find the pictures that I did take. I'll keep looking though. Keep up the awesome work on the page!

This page has an error; the list of Utah completers fails to include Dean Molen. Please fix ASAP! ;-) Congratulations Dean!

Thanks Eric. Add Dennis Poulin to that list as well since we finished the state on Tuesday, the 22nd. As we were heading down, we met a guy named Terry Sandler (sp?) who was going to finish all of Utah as well. He was just an hour behind us. I'm sure there are many who aren't on the cohp list and will never be noted since they are not even aware of the cohp group. They are just doing Utah because of the "High in Utah" county highpoint book. A trip report will be forthcoming. What a great ten days I had in Utah, Idaho and Wyoming.