El Fraile snow covered
This unimpressive peak may win the price; "highest pile of sand on earth". There's no permanent snow anywhere on the peak and this is common on peaks of the Puna. Its closest neighbour, Incahuasi at 6621 meters is supposedly the highest without any permanent snow or ice. At 6061 meters, El Fraile is ranked as number 83 on John Biggar's peaklist about South America's highest peaks.

The border mountain is located close to Paso de San Francisco, which makes access reasonably easy as one of the main roads over Los Andes crosses this pass at an altitude of 4745 meters. According to some sources this makes the pass the second highest border pass in the world after Paso del Agua Negra (4779 meters), which also links Argentina and Chile further south.

The peak was first climbed in 1956 and has only seen one more ascent since then, probably because of its appearance and nearby more attractive and higher neighbors like; Ojos del Salado, Incahuasi and Pissis.

If you want to attempt El Fraile, aim for the long scree and sand slopes on the mountain's N and NE sides. The SE and S slopes are full of rocky ridges. The rock here is extremely rotten and rockfalls are constant.
El Fraile has a flat and quite large summit plateau and it's a bit similar to the one on Bonete Chico. Both peaks has a pointed little pyramid in one end of the plateau. In El Fraile's case, it's located on the plateau's southern end. 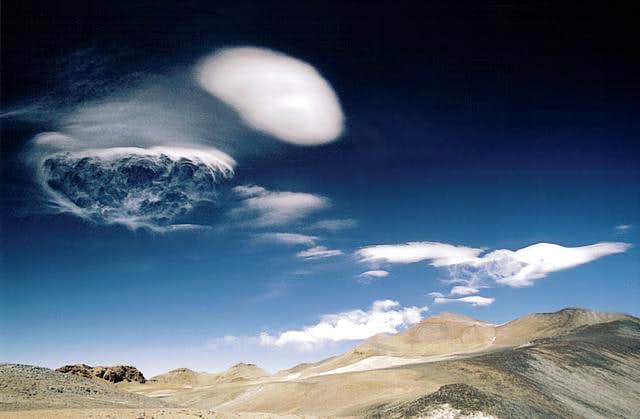 Argentina:
La Rioja and Catamarca are the two major cities in the area and both are the capitals of the provinces with the same names. When in any of those quite large cities; look for local transport towards Tinogasta and Fiambalá. Most buses only goes to the former and you may have to change there to get to the latter, which is the perfect base for mountaineering in the Puna. If you arrive late in Tinogasta and there are no more buses, shared taxis runs until very late and even if you have to rent one for yourself, it's inexpensive at USD$10 for the 50-55km ride.

All necessary basic food items are to be found in Fiambalá and one of the persons who know the area best of all, Mr Reynoso is operating from here. 4x4 vehicles can be rented with a day's notice and will take you to the any of the trail starts to all the peaks in the area.
Slightly cheaper is to go by taxi, which is 1 Peso/km (0,3$US). From Fiambalá to the Las Grutas border post it's about 200km.
Hitchhiking may also be an alternative, but expect very long waits. There are only about 8-10 cars a day, but on the other hand most stop, perhaps because of the very rough environment.

When in Las Grutas, you have two options of reaching the peak, which will be explained on the upcoming route page.

Chile:
First of all; if arriving all the way from Copiapó, remember there's a lot of altitude gain from the coast to the pass, which is at 4700m. The approach has to be done in steps, if not acclimatized.

Copiapó, a quite large city, is the starting point from the Chilean side and the only feasible way to travel towards the highlands is by car. There is no public transport linking Copiapó with the El Fraile area.
There are some options how to get there.
1). Join a commercial expedition/package tour.
2). Rent or charter a vehicle.
3). Hitchhike.
If you opt for alternative 3, be sure you bring lots of water and you have to be prepared for long waits as there are very little traffic on this remote road.

Most unacclimatized people travelling towards the border pass and the mountains, usually take a day off at Laguna Santa Rosa at 3600m before continuing to Laguna Verde, which is at 4400m. It's a good idea to stop for a day also here.

Laguna Verde in Chile, seen from high on El Fraile
If driving your own car, head east on Chilean highway # 31 towards Paipote and Paso de San Francisco. After 10 km you take a left for Paipote and another 15 km take a right and follow the 31.
There's a turn-off after about 80 km and you'll have a choice of two roads leading to the border post. These two roads are quite similar and it doesn't really matter which of them you go for. About 4 hours out of Copiapó you arrive at the border post, where you officially leave Chile. This post is located about 180 km from Copiapó and the officials who stay there can usually update you about the weather and snow conditions on the peak.
The distance Copiapó to Laguna Verde is roughly 270km and that's about 6 hours in a car. Paso de San Francisco is another 25 km further.
The best way to reach El Fraile from the main highway is to continue for about 12-13 km down the road until you see an open valley leading dead south. You can see the peak from the main road on the left you see the more impressive and 600 meters higher Incahuasi.
Bring lots of water before leaving the highway, as it's unlikely you'll find any on the way to the peak.

Bleak and desolate
From Argentina:
No fees, no permits needed, but the police in Fiambalá is happy if you register before you leave for the mountains. They will ask you how long you plan to away for, what type of equipment you’re bringing and if they find inadequate, or if they consider the weather too bad etc. they may ask you to write a disclaimer, stating they are not responsible for your safety in the mountains. The police in the customs just before Paso de San Francisco may also want you to register and will ask some questions about how long you plan to be away etc.

From Chile:
El Fraile is a border zone mountain and therefore you need a permit from DIFROL (Dirección Nacional de Fronteras y Límites del Estado). The peak is not mentioned on the website, but as it is located right on the border, you better find out if you need a permit or not. Or, if you don't want the hassle, climb El Fraile from Argentina.

El Fraile and Incahuasi
El Fraile and most other peaks in this part of the Puna, are normally climbed from December to late March. It’s the warmest period in the southern hemisphere, but also the most windy and dry. Some climbers choose to go later in the year as water is easier to find (snow and ice to melt) and the average wind speeds are usually significantly lower. Regardless of when you plan to go to the area, be prepared for very low temperatures and extreme winds. It may be warm, calm and sunny, but remember; the Puna is infamous for fast weather changes and fierce climate. Wind-proof clothing is an absolute must and so are really good protection for hands, feet and face.

The rocky plateau ridge of El Fraile
Camp spots are easy to find anywhere in the area.The catch is to find a place with nearby snow to melt. The Argentinean side, especially close to the unmarked border pass at the foot of the mountain’s eastern side is a good bet. The Chilean side is much drier and I didn’t see any snow there whatsoever . There are no camping restrictions in the area.
The closest lodging is at Las Grutas border post on the Argentinean side. One of the few buildings there is a small cheap hostel, where you can use the kitchen if need be. On the Chilean side, you can stay in the refugio close to Laguna Verde.


Fiambalá - a good base for the climb

As for all the other peaks in the Puna, Jonson Reynoso is the person to contact. He's located in Fiambalá and knows the region as the back of his hand. The services he can offer include transport, mulas, info and he has some gear for rent.
If arriving in Fiambalá without any prior contact with him, you'll find him on one of the corners of the main square in a building marked Seguridad Turistica - tourist police. This is also the place where you register before haeding for the mountains.

Fiambalá has a few good restaurants. Ohlala is one of them. It's located on the main square and is run by a french girl. Excellent food. Another option is the flashier and more expensive Pizzeria Roma a block away from the square. There are bakeries, some small supermarkets and food shops. Two farmacies, two internet joints and some highly recommended hot springs makes the place a perfect base for the climbing adventure on the Puna.
The town is also famous for good vines and archeology.

The place to stay for a mountaineer is of course Hostel Campo Base. Located a two minute walk from the main square and ran by Jonson's daughter Ruth, who also is an alpinist with good knowledge about the area. The location is quiet and one can use the kitchen. A great base.

El Fraile from WSW
The best way to find out about the weather beforehand is to ask the police in Fiambalá. They are in contact with the customs police at the border post in Las Grutas, which is located only 30 km from El Fraile.
On the Chilean side you can make sure the weather is ok when at Laguna Verde. Ask the police in the post close to the refugio.

Note: All coordinates above are GPS-coordinates. If you need to convert them, look here.

El Fraile from the summit of Incahuasi
If in Las Grutas, the border post on the Argentinean side, asking for directions on how to get to El Fraile, you may get answers like:
The easiest way to get there is to cross the border to Chile NNW of Incahuasi. The you'll see El Fraile in the SW. It's illegal to cross the border like that but, just stay out of sight from the Chileans and you'll be ok. If they see you, just act like you were lost. Don't worry, no one will see you.

I have to admit I went for this option, but remember; you're breaking the law and of course you may end up in trouble if being caught.

So why do these guys recommend this?
Basically because they want to be helpful as this is the easiest way to the peak. The alternative is to walk around the base of Incahuasi on its eastern and southern approaches. It's longer and also much harder as you'll have to cross some steep ridges and walk for long stretches in deep sand. The guys which warned me about taking this route towards El Fraile was also very concerned that I wouldn't find any water. They said they had only found some "Ojos" with salt water.