Fat City is another very aesthetic looking ice line located in Eureka, just past the ice climbs: First Gully, Second Gully and Goldrush.  The climb is found in the alcove above the road (=CR 2). The access is rather sleep and long and involves about 200 meters of steep scramble through the willows for part of the ascent. I actually liked the willow part - good holds helping you not to slide down the snow.
Jack Roberts in his Colorado Ice provides only a very brief description and he calls the whole area of Fat City Three Stooges, which makes a sense. There are actually 3 separate ice climbs in this alcove! The alcove itself is accesses usually on ice, unless there is a lot of snow, some may opt to rope up to climb there on WI2/3 ice. Inside the alcove expect a sloping either ice or snow field - we encountered deep snow up to our thighs.
The first climb on your left (and farthest one) is a gully looking ice called Larry. It is rated as WI3 and appears to have low angled ice alternating with steep ice steps. Jack Roberts describes it as a 50 meter long. We have not climbed it although it looked nice. We opted out for more steeper ice. Larry on Mountain Project
Moe WI4 is a steeper looking ice slab in the middle between Larry and Fat City. Jack Roberts describes this as a 50 meter climb, however we climbed it in 2 pitches, with first pitch using the whole 60 meter rope and 2nd pitch was about 20 meters long. Moe on Mountain Project
Fat City, also known as Curly Joe WI5, 100 meters, this pillar is usually obvious and forms every year A classic and fun waterfall climb (from Colorado Ice). It is usually climbed in 2 pitches. Fat City on Mountain Project 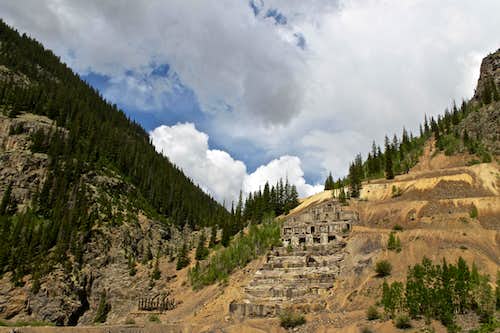 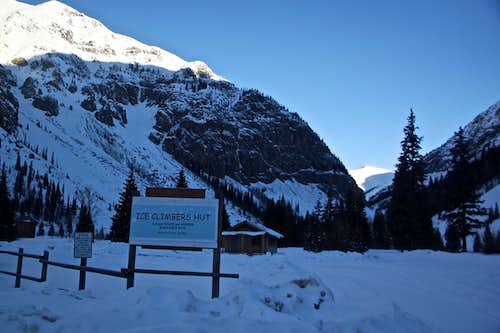 Ice Climber Hut
Elevation in Eureka: 9,862 feet (=3,006 meters)
Eureka is an abandoned mining community nine miles northeast of Silverton on Hwy. 110. Highway 110 is a bit misnomer, as it is an unpaved road that connects Silverton to Lake City via Cinnamon Pass. The first section of the road is well maintained and accessible by low clearance 2WD vehicles. The road is kept open even in the winter all the way to Eureka (past Eureka it is closed until end of May/June).
There is a nice cross country ski trail next to this road leading back to Silverton. Back country ski opportunities in this area are excellent, but pay attention to avalanche danger!
History: Eureka is a mining ghost town along the Animas River between Silverton and Animas Forks. The town got its start in 1860 when a small group of miners began to dig and pan around the banks of the Animas River. The train service came to town in 1896. The Sunnyside mill was the main economic source for the town. When the mill closed in 1938, Eureka was no more. What are left are foundations that climb the mountain sides reminders of the town that was.
The climb itself is relatively safe from avalanche danger, but the road is not and you will have to cross several avalanche paths - check Northern San Juan Avalanche Forecast prior going out.
Climber's Hut - if you need to spent a night, there is a climber's hut in Eureka - very simple hut, one room with beds (no mattress), table and chairs. There is a stove and wood to make fire. I think there is a jar where you can (and should) leave money for lodging.
Nice place to stay in Eureka: Eureka Lodge (former Outward Bound Hotel). You do need to make an advanced reservations since the owners are not there year round. The lodge feels like ghost hunted place! 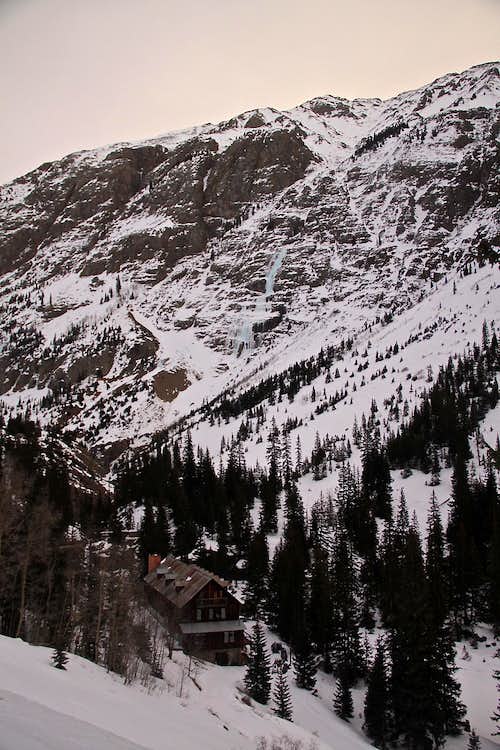 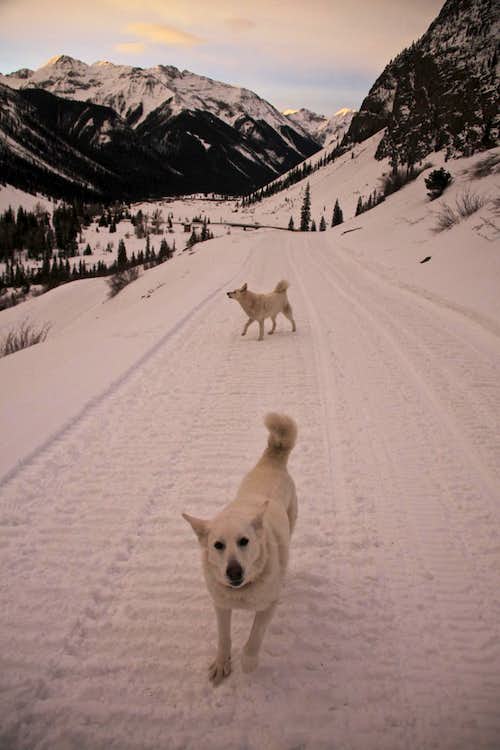 Approach to 1st and 2nd Gully, Goldrush and Fat City on CR 2
From the Main Street in Silverton, continue onto initially paved and then good dirt road - Hwy 110 - which is snowplowed for the first 9 miles. As you pass  through Silverton turn right onto 110 = county road 2, if  you go straight uphill on 110, it will take you to Silverton Ski area. Drive past Howardville through a valley, past Minnie Gulch, all the way to Eureka (9miles). Park at the large parking lot on the west side of the road. There is a dry toilet (hard to access in the winter since the door gets buried in the snow). In 2018 the parking was moved north of the toilet. You do NOT need high clearance of 4WD vehicle to get there.
CR 2 normally continues to the Animas Fork Ghost Town and up alpine passes: Cinnamon Pass and Engineer Pass, part of the scenic Colorado alpine loop. However, the road is closed from November (first major snow fall) until June.
Foot Approach from parking at Eureka: Hike up on the snow filled road = county Road 2 = above the Eureka Lodge (Jack Robert's in his Colorado Ice climbs calls by its old name Outward Bound Hotel; see photo on the right). Continue up the road, there is usually a trail by climbers accessing climbs off this road. You will be passing on the west side (left) ice climbs: First Gully WI3, Second Gully WI3, and Goldrush WI4/5. Fat City WI5 is the first big ice higher up above the road, and just another 5-10 min hike up from Goldrush.
On the east side (your right) is a deep gorge with Animas River and across are classic climbs such as Highway to Hell WI4 and Stairway to Heaven WI4.

Fat City WI5 - is the first climb on your right as you enter the the alcove, and it is the closest climb. The climb is easy to identify - very beautiful looking ice waterfall with a steep pillar higher up. It is about 100 meters long and is climbed in 2 pitches. The first pitch was steep, and aerated (Jan 2018) ice. It did not look like it was climbed - large plates of ice were breaking, and one of the most scary leads for me. The ice screws were not creating the nice column of ice, which made me nervous. I could have chosen a different line, more solid looking ice on the far right, but the groove of ice appeared more inviting from the approach. I did have to break the trail to the start of the climb and was up to my thighs in deep snow. I stopped on the right side of the steep column and created anchors (did not see any on rock walls). This pitch was about 30 meters long.
The 2nd pitch is steeper WI5 conditions in January 2018, and about 25 meters long. The center of the pillar had almost a groove and it starts really steep, and higher up easiest, but expect a sustained WI5, then WI4/5 climbing. Rappel via v-threads.
Moe WI4 - is the next climb up, it is again a 2 pitch climb on ice slabs. The waterfall was wide and you could accommodate 2 parties climbing here. The first pitch was full 60 meters until I reached slings around a big tree below another steeper flow, on the left side. The first section of ice was WI4, higher up WI3. The 2nd pitch starts with a few steeper moves WI4 and eases into WI3, it was shorter, about 25 meters. There were slings at the top around a small tree in a good condition. Descent is via 2 rappels, the first one rope, the second rappel 2 sixty meter ropes.
Larry WI3 - farthest up the alcove, obvious narrow gully with mellow sections of ice and steeper flows. We did not have time to climb this one. Per report it is only one pitch long, about 50 meters, so one would assume you do need 2 ropes to rappel.