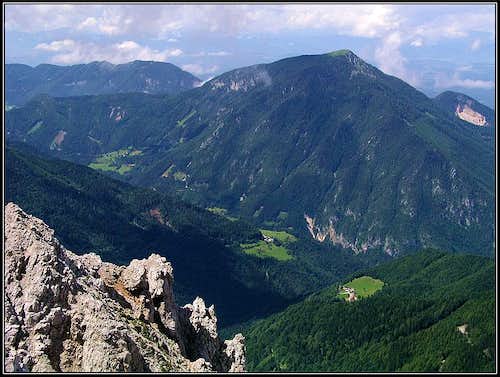 Those who are travelling from Klagenfurt / Celovec over Loiblpass / Ljubelj to Slovenia, perhaps expect only low and humble mountains on the way. The tunnel below the pass hardly exceeds 1000 meters of altitude and Karavanke / Karawanken mountains are known as not very high anyway. So the traveller is pleasantly surprised when above Ferlach / Borovlje a high, rugged triangular slope rises, Lieselotte Buchenauer called it "Rosentaler Eigerwand" - "The Eiger wall of Rosental". That slope above Unterloibl / Podljubelj is actually more than 1300 meters high and deeper in the mountains the creek of Loiblbach / Borovnica forms a wonderful, deep canyon, called Tscheppaschlucht / Za Čepo.

If the NW slopes of Ferlacher Horn / Grlovec are almost vertical, falling down in Kotla ravine, the other side is more gentle, covered with woods almost to the baldy, grassy summit. In the lower part there are some remote alpine meadows and farms and the mountain roads are ascending high up the slopes. Geographically the summit of Ferlacher Horn / Grlovec is already in the northern chain of Karavanke / Karawanken. That is why the view from its top is very fine, especially on the long range of Košuta, towards the valley of Drau/Drava river and also towards the west, on the highest mountains of Karavanke / Karawanken.

Towards the W-SW the main ridge of Ferlacher Horn / Grlovec lowers towards Eselsattel / Oselica saddle, 1175 m, where the mountain is attached to the broader massif of Košutica / Loibler Baba. On the western side there is the deep gorge of Loiblbach / Borovnica, the most picturesque part of the canyon is called Tscheppaschlucht / Za Čepo. Towards the south, the slopes of Ferlacher Horn / Grlovec are falling down in the remote Oberwinkel / Zvrhnji kot valley (Ribnica creek valley). East of the mountain there is a broader valley of Waidischbach / Bajdiški potok, which by the town of Ferlach / Borovlje comes out of the high mountains and flows to the nearby river of Drau / Drava. In the northern ridge of Ferlacher Horn / Grlovec a minor summit of Sechter / Žehtar, 1447 m, is rising.

The town of Ferlach / Borovlje is known by its hundreds years lasting tradition of making highest quality firearms.

Geologically, like in other high summits of Northern Karawanks, also the rocks of Ferlacher Horn / Grlovec are built of middle-Triassic Wetterstein limestone (and in a lesser degree Wetterstein dolomite). In lower areas, also other rocks are present, for example in Kotla ravine the middle-Triassic "Musschelkalk" (shell-bearing limestone). It is interesting that the famous Periadriatic lineament runs just south of our mountain - by the valley of Ribnica and over the Eselsattel / Oselica. The other two borders of our mountain are also determined by geologic faults - on the NW is the fault of Loibl valley and on the NE is the fault of Waidisch / Bajdiše creek. 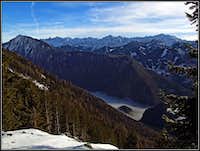 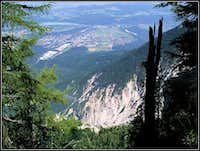 1. From Deutscher Peter, 700 m (W-SW route). From the inn we go some 200 meters by the main road towards the south and there deter left on the marked path, No. 601 and No. 03 - Sudalpenweg. A dirt road goes up by a creek bed some 30 minutes, to the point where the path branches. The right branch goes on Eselsattel / Oselica saddle, but we go by the left path, the No. 601. Higher we cross a mountain road, then continue by a bit weaker but still well marked trail, until above we reach another mountain road. We follow it till the place where the marked path leaves it by deterring left. After a meadow we reach the third mountain road and after a while leave it towards the left again. Now the trail goes first paralelly to the road, then it ascends a bit steeper through the woods to the main ridge. There the views towards the north open. In the vicinity of the main ridge we continue towards the east, in a few places some care is needed (otherwise the path is all the time easy). But the ridge is very long, so don't expect to reach the summit quickly! Finally we exit on a summit meadow and reach the cross on the top. 3 h. On the Swiss Hiking Scale difficulty would be T2.

2. From the south. If we park by Franzi farm, 1000 m (or just below it), this is actually the SW approach - the fastest and most popular one. The marked path (No. 632) goes in nice switchbacks through the woods in the northern direction, until after 1 h it reaches the cart road and some 50 m above it the West ridge. There you turn right and as described above, along the long main ridge (No. 03 - Sudalpenweg) ascend on the summit. 2 h 30 min. On the Swiss Hiking Scale difficulty would be T2.

There's also a 30 min longer alternative. From the parking place down by the creek, 906 m, you may continue by the valley westwards, then deter right and pass the farm of Žerjav. From there a rugged mountain road brings you on Eselsattel / Oselca, from where you continue around Zeller Grintoutz / Koški Grintovec on the main ridge of Ferlacher Horn / Grlovec.

3. From Waidisch / Bajdiše, 547 m. From the village we drive 1 km up the valley, where we can park, cca 560 m. The marked path crosses the creek and starts ascending towards the west. The route goes by cart roads and well beaten trails, we pass a few houses, go through the woods and over alpine pastures. 3 h 30 min, easy.

4. From Ferlach / Borovlje, 475 m. We start either in the town or on the road SE of it. The marked path first ascends steeply and in many turns the northern slopes of Sechter / Žehtar, then crosses its western slopes, and from the saddle south of this fore-summit crosses the eastern slopes of the main summit. On some 1450 m from the left the path from Waidisch / Bajdiše joins and on some 1550 m we gain the SE ridge of Ferlacher Horn / Grlovec, where we turn right and continue on top. 4 h. 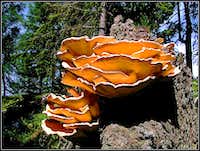 There's no official hut on the mountain and the shorter ascents can be anyway done in half a day.

There are no special restristions in the area. Many mountain roads are closed for public traffic, the usage is allowed only to locals, approaching their farms and alpine pastures. More unusual than that is the prohibition of mountain road useges also for mountain bikers! What damage to environment can they do, if using roads?

Ferlacher Horn / Grlovec can be ascended any time in the season. In winter the ascent over the summit part can be enduring (if a lot of snow) and on the west ridge some care (or additional equipment) is needed if snow is hard or even icy.