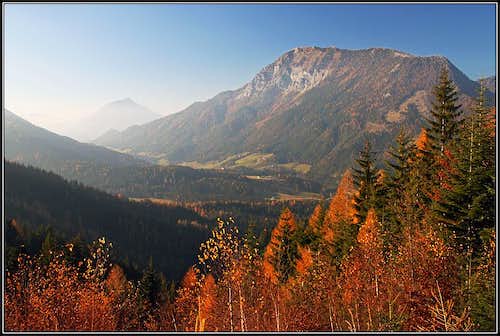 Freiberg / Setiče (also Austrians write the Slovenian name Setitsche) is a broad mountain massif west of Hochobir, in the northern chain of Karavanke / Karawanken. Even if it does not exceed 2000 meters, many summits in the area have also steep and rocky slopes. The views from the highest points are very nice, especially towards the south on Košuta range and further in the distance along the valley of Drau/Drava river. I only once ascended the highest summit and the summit of Macna/Matzen. If you have valuable information about Javornik and Črni vrh, please add it.

On this page in the future information about the following summits should be presented:


A Bit of Geography 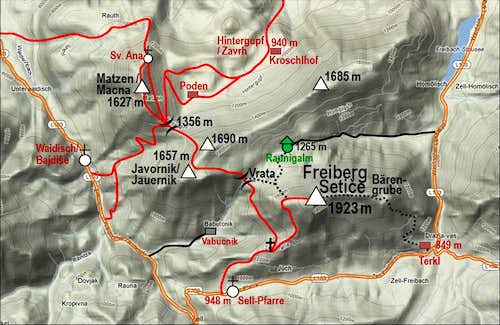 Freiberg / Setiče rises on the southern end of the mountaineous area which stretches between Freibach valley on the east and Waidischbach / Bajdiški potok valley on the south-west. The northern border of the area is Drau/Drava river valley. Around the southern side the road goes, connecting Ferlach/Borovlje and Eisenkappel / Železna Kapla. In Zell/Sele towards the north the road through Freibach valley deters.

The higher mountains in the area form three smaller groups. Freiberg / Setiče is stretching from Wrata/Vrata saddle on the west to Freibach valley on the east. North of it a long ridge goes from the double summit of Jauernik/Javornik, 1690 m, on the W-SW to Schwarzer Gupf / Črni vrh, 1685 m, on the E-NE. And finally NW of Jauernik/Javornik there is the summit of Matzen/Macna, 1627 m. Between these three parts of the massif there are two saddles, which can be crossed by quite good paths: Wrata/Vrata, 1376 m, and Hansenruhe/Koce, 1356 m.

On the summit of Freiberg/Setiče

Freiberg/Setiče from the E
Freiberg / Setiče itself has a quite steep, partly also rocky southern slope and a forrested northern slope, descending into Suchagraben / Hudi rov (Klešče). In the eastern ridge, there is a bump called Terklturm / Kriva peč, 1798 m, which further to the east lowers on Baerengrube / Medvedja raven. North of the summit, at the end of Suchagraben, there is an alpine meadow, called Raunigalm / Ravenska planina, 1265 m, over which one of the ascents on top goes.

Sta. Ana
Matzen/Macna is a bit lower, but also harder mountain. The northern and the southern ridge are marked hikes, but require some experience (the northern route is less demanding). Otherwise the mountain is known by the chapel of St. Anna, 1536 m, which every year hosts crowds of visitors, coming on pilgrimage (on July 26th). On the eastern slope of Matzen/Macna, on the altitude of some 1100 m, there is a so-called Eiskeller (Eisloch, Ledenica), a cave which is through a whole year filled with ice. How deep the ice is, can be seen by the 7 meters deep fountain.

The northern summit of Matzen/Macna, above the valley of Drau/Drava river 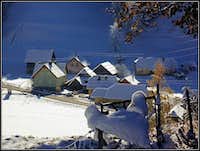 You can start hiking into the massif og Freiberg / Setiče from almost all sides. For the highest summit, the most important trailheads are:

2. Waidisch/Bajdiše or the point on the road 2.5 km SE of the village, where the mountain road goes up to the ex Vabucnik farm.

4. Homoelisch/Hmeliše, near the southern shore of the lake.

All these points are either on the road Ferlach - Eisenkappel, into the valley of Freibach, you can drive also from the north, from the valley of Drau/Drava river (Wildenstein).

The summit, the chapel and the cave can be easiest reached from Hintergupf/Zavrh hamlet, where in the famous Kroschlhof/Krošel inn we can also sleep. Hintergupf/Zavrh is a charming place itself. Especially in June, on the northern part of the terrace you can find one of the most beautiful meadows in Karavanke/Karawanken. 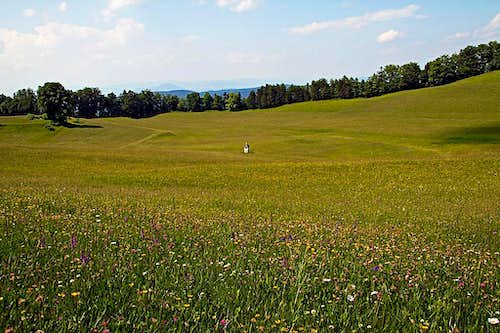 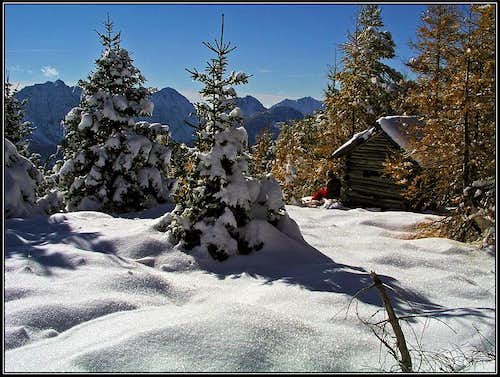 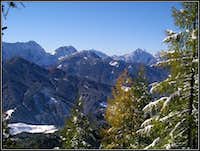 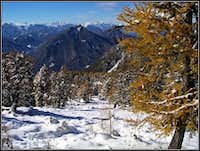 On the summit ridge
Freiberg/Setiče from Zell-Pfarre / Sele - Pri cerkvi. From the bus station, 948 m, (inscriptions nearby) we go by the marked path No. 603 towards the north. The path soon starts turning towards the NE, then even towards the east and in one hour we reach Užnikkreuz (cross) on Hundsruecken, 1300 m. Here the paths are branching. The left marked path goes across the western slopes on Wrata/Vrata saddle (or before the saddle down to Vabucnik), our path continues in the NE direction by the ridge up. Soon we reach the hunters hut on 1406 m (Nikolaushuette). From the meadow by the hut we have a nice view on Košuta range. By the hut paths branch again (towards the right an unmarked hunters path goes), but we simply keep to the marked path which goes left. Then a steeper part of ascent starts. In several turns the path goes up, but on a few places it also crosses steep western slopes of the mountain. The path gains the summit grassy ridge on some 1700 m. It is almost a plateau-like ridge, on which we turn right and comfortably ascend the highest point. Except a few steep parts the path is not difficult (by the Swiss hiking scale T2), 3 hours altogether for the ascent.

Freiberg/Setiče from Waidisch/Bajdiše. From this village the marked path goes up towards the NE on Hansenruhe/Koce saddle. But that is a longer option, because in the continuation we must cross the summit slope of Jauernik, descend to Wrata and from there continue on top. A shorter route starts some 2.5 km SE of the village, 661 m, by the bus station where a mountain road starts up towards the ex Vabucnik farm, 940 m. From there, you can continue towards the E-SE and reach Užnikkreuz (then on top as described above), or continue on Wrata and from there right on top. Altogether 4 h.

Freiberg/Setiče from Terkl. By this inn an unmarked approach goes on the east ridge of the mountain. We go first some 5 minutes by the road towards the west, then by a mountain road up towards the north. Above, the path is poor and brings us on Baerengrube / Medvedja raven, where we turn left and continue by the panoramic east ridge on top. 3 hours, less recommendable.

Freiberg/Setiče through Suchagraben. We enter this valley by the southern shore of Freibach lake. The mountain road is closed for public traffic and ultimately brings us to Raunigalm (alpine meadow). From there by not steep slopes towards the south (meadows) on the main ridge and left by it on top. This is also a possible ski tour. 4 h to 4 h 30 min.

Other approaches on Freiberg / Setiče are longer. But also other summits of the group can be rewarding goals of a hike. Jauernik is also very panoramic and can be reached either from the west, east or north (and also from the south through Vabucnik valley). Very interesting is also the protected path from Užnikkreuz across the western slopes of Freiberg.

Matzen/Macna from Kroschlhof/Krošelj. On the crossroads, where the road goes right to the famous inn, you continue left, towards mountains. You can also drive here a few hundred meters, then the sign stops you. The mountain road soon turns westwards. You pass a nice, interesting meadow and contionue till the crossroads, where marks turn you left. The other option would be to continue by a good forrest road towards the SW. In both cases mountain roads reach the eastern slopes of Matzen/Macna, then you continue by the upper road across them to Hansenruhe/Koce saddle, 1356 m. There only the true ascent begins.

The southern route sticks to the main ridge. It soon becomes steep and requires some care. But you gain altitude quickly and from the ridge you already have very nice views on both sides. Soon afterwards you reach the southern summit. 2 hours from the inn, difficulty would be T3 by the Swiss Hiking Scale.

It is very recommendable to continue from the south summit to the northern one. The path is still steep, but not harder than so far. This part of the ridge is called "Turni" (towers) and indeed you cross a few rocky elevations. On the northern summit there is a big cross. There the tiny trail turns right, into the eastern slopes. It gets very steep and protected by steel cables. In the next notch you continue by the eastern slopes (cables go up on the next panoramic bump) and soon the ridge gets less steep. After losing some more 50-60 meters you already reach the cute Sta. Ana church.


It is interesting that from the church no marked path goes directly down to Kroschlhof/Krošelj inn. The marked path which continues by the ridge turns left and descends as far as on Rute hamlet. To return on the starting point, we must turn at the church sharp right. A good, marked path now crosses the whole eastern slope of Matzen/Mace, exiting finally on the southern ridge, a few minutes above Hansenruhe/Koce saddle. From there you return by roads. 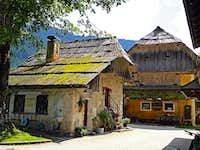 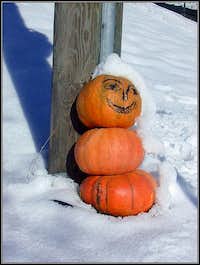 Welcome!
In the whole massif there are no official mountain huts, but all around there are a few old-time inns with rich heritage, like Terkl/Trkelj, Kroschlhof/Krošel, and others.

Freiberg / Setiče can be ascended any time of a season. For the route from Zell-Pfarre dry season is recommended. The path is steep enough that in snow it can become dangerous. The northern approach is also suitable for skiing.

Matzen/Macna can be best ascended in snowless months - usually from start of June till end of October. 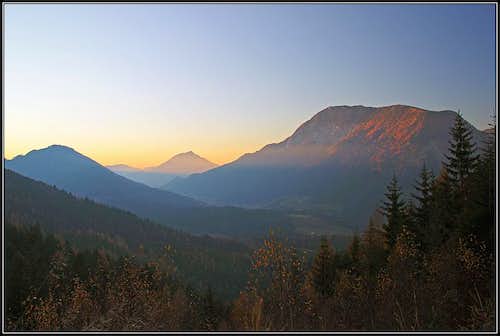