In Slovenian language č, š and ž are pronounced like ch, sh, and zh. Our mountain is written Ovčji vrh. 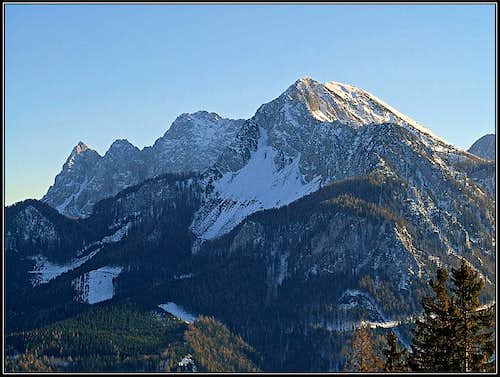 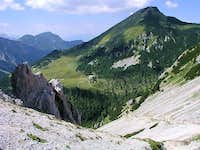 The original name of our mountain is Ovčji vrh, but nowadays more and more is used the new name Kozjak / Kosiak / Geissberg, which once referred to an unimportant summit north of the mountain.

Most visitors would remember Geissberg / Kozjak as a grassy, rounded mountain with a great view on the central part of Karavanke / Karawanken massif. Yes, they did the ascent over its southern slopes, after making a break in Klagenfurter Huette, which stands just south of it. But driving by the main valley of Drau/Drava river, when they would look on the central part of Karavanke / Karawanken from the vicinity of Feistritz in Rosental / Bistrica v Rožu, they would ask themselves which is that sharp cone peak, standing so fiercely in front of the main chain. It is Geissberg / Kozjak too, with its steep, rocky northern face and a sharp north-western ridge, reaching its summit.

So, it is a nice panorama, with which Geissberg / Kozjak attracts people mostly. But the nature is in the end of Baerental / Rute valley nice too. Geissberg / Kozjak is famous also for its abundant flora. And, last but not least, in winter and spring its grassy slopes are very nice for a sunny ski tour. A bit steep for less experienced, but not too hard, as snow is rarely hard there.

Two nice valleys are embracing Geissberg / Kozjak. On the east it is Bodental / Poden, finishing with its fairy-tale meadow, called Maerchenwiese / Mlaka. On the west is a more deeply cut Baerental / Rute, which brings you just on the broad screes below Hochstuhl / Stol and Weinasch / Vajnež. By both valleys you can do the tour on top, and they are equally nice. The northern and north-eastern side of the mountain is kind of a mistery. Nothing is known about those rocky faces. They are not high, and as nowadays every crag hosts climbing routes one can only infer that those rocks are of a very bad quality for climbing. And the same must be true for the NW ridge. But perhaps locals are hiding some secrets? And fianally a small summit NE of Kozjak should be mentioned too. This is Kosmatica / Kosmatitza, 1659 m, a forrested summit above Ogrizeva planina / Ogrizalm (meadow), offering so nice views on Vrtača north face. 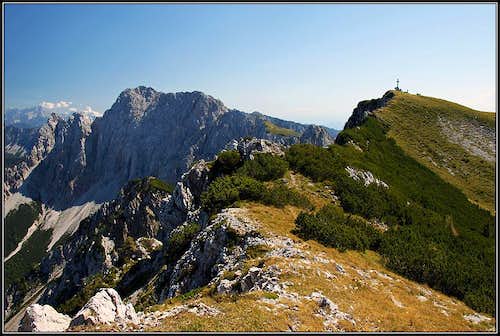 The main summit from the NW fore-summit 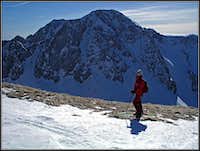 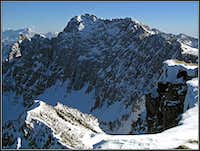 As said, a big advantage of Geissberg/Kozjak is, that it stands just opposite the highest part of Hochstuhl / Stol group. And, as Karavanke / Karawanken are a long streak of mountains, it is just enough indented towards the north to enable a great view along the mountain chain. On the other side, towards the north, the view is opened. Across the broad and sunny Drau / Drava valley you can rest your eye on snow-capped high summits of Hohe Tauern, and towards the east on lower groups, such as Nockberge, Lavanttal Alps, Niedere Tauern and behind them Dachstein.

For general overview information see the Karavanke / Karawanken GROUP page. Geissberg/Kozjak can be reached by two valleys in which you enter from the north, from the valley of river Drau/Drava. 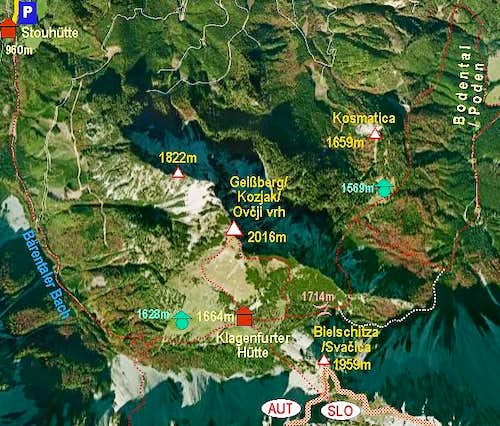 Limestone tower below the E shoulder 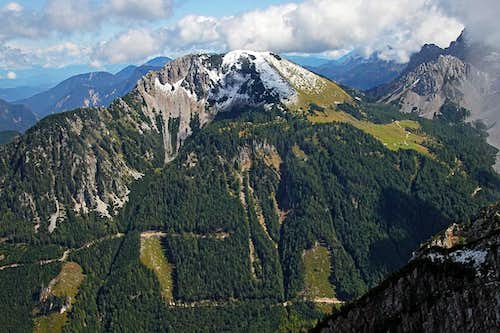 Kozjak / Geissberg from the west

We park on 960 m and continue by the main valley. When the mountain road starts turning from the S direction into the SE direction, it starts ascending steeper. We continue by the marked path, make a few last switchbacks and reach Klagenfurter Huette / Celovška koča, 1664 m. 2 h till here. This part of the hike can be done also by a mountain bike.

From the hut we turn north and over grassy slopes either directly (no path) or over the western shoulder in one more hour ascend on top. The path goes first a bit westwards to Mačenska planina. This alpine meadow and its huts can be reached also directly, so we don't need to go all the way to Klagenfurter Huette. In continuation the path goes steeper up and on top. The second path from Klagenfurter Huette goes a bit further towards the E - towards Vrata pass. Half way to the pass, on a meadow, inscription tables deter us left, up the slope. The initial ascent is steep, we go towards a distinct limestone tower. Soon we reach the E shoulder and proceed left on the summit. Both paths are easy and can be combined into a round tour. The southern and SW slopes of Geissberg/Kozjak are also popular as a ski tour. 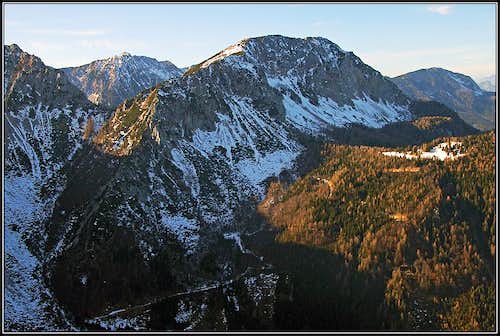 From Podnar / Bodenbauer we continue by the valley towards the south. In 20 minutes we reach Maerchenwiese / Mlaka, a beautiful meadow, from where you have a great view on the north walls of Vrtača, Zelenjak and Palec. We continue into the forrest, then turn right and soon the marked path exits on a mountain road which goes up to Ogrisalm/Ogrizova planina. The path cuts the road several times and just before arriving to the alpine meadow we reach a crossroads. We now turn left and follow the marked path towards the south. We must now get around the SE ridge of Geissberg/Kozjak. The rocky pass is known as Štince / Stinze (means: štengice=steps) and is secured with a few cables. The path descends a bit, then it crosses the rocks (protection cable), then it ascends a rocky ridge directly up, secured on several places. Above, the path does a few turns, then aims a small notch on the left and on the other side of it, the rocky part is over. In some 15 further minutes we ascend on on Vrata / Matschacher Sattel, 1714 m. From there we comfortably descend to the hut and continue on top, as described above.

We can also before the hut turn right and ascend the east shoulder and the ridge of Geissberg / Kozjak. The ascent on top directly from the saddle Vrata / Matschacher Sattel is also possible, but not recommended, as it is very overgrown with pine bushes. Altogether some 3 h 30 min till the summit. We can also avoid the Štince/Stinze passage by using a steep, unmarked path, which goes directly up, in the vicinity of the lower part of the long screes. This path deters from the marked path to Ogrisalm / Ogrizova planina already on the first right turn of the road, immediately after the marked path comes on the road. On the turn we simply continue straight into the woods and find a good path which brings us directly below Vrata saddle. This path is well visible if we are descending from Vrata (just turn right down) and is especially valuable in snow conditions (when Stinze passage can be difficult). 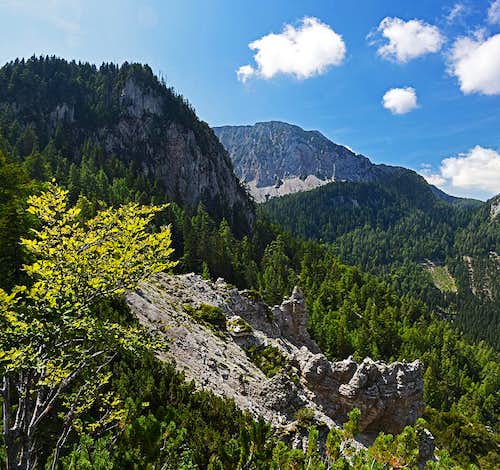 Strugarza / Strugarica is a narrow valley, a side creek, which flows into the Baerenbach north of Stouhuette. The ascent is of a little value, unless we want to explore some remote and shady corners of these mountains. On the altitude of 736 m we enter the valley, soon turn right and follow the creek. The path is not marked and can be hardly followed. If we find well, we come out on Ogrisalm / Ogrizova planina. 2 h till there. From the meadow we can ascend in 15 minutes the nearby Kosmatitza / Kosmatica, 1659 m, or continue as described above in #2 on the summit of Geissberg / Kozjak.

The tour is done in spring (May, June), when the ravine is filled with snow. Crampons and ice axe needed. The rock is very crumbly. From the eastern side of the moutain you cross a shallow valley towards the NW, until a distinct ravine opens towards the south. Through it up, the couloir is getting steeper (on top cca 40 degrees) and narrower. The final passage goes over the rocks (UIAA II+), some 30-40 meters. Then by the ridge towards the NW on top. Route description in German is here. You can see a detailed map (1:50.000) on-line on: http://www.austrianmap.at/. 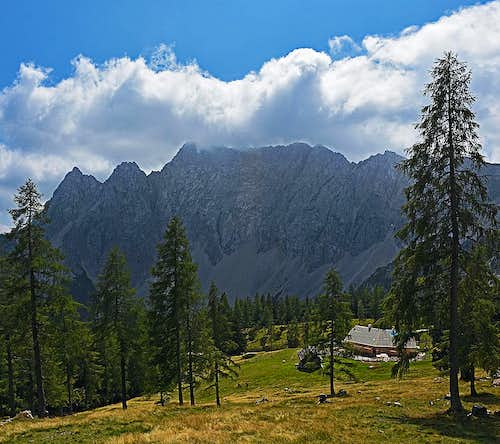 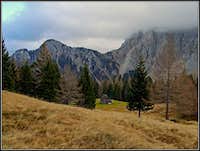 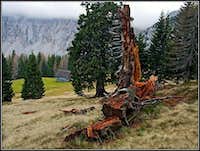 North-east of the summit of Geissberg/Kozjak, there's one of the most beautiful places in Karavanke / Karawanken. Ogrizova planina / Ogrisalm is a big meadow, oriented towards the south, offering great panorama on the northern walls of Vrtača, Zelenjak and Palec. It can be reached in 1 h 30 min from the last farm in Bodental / Poden, actually two comfortable marked paths get there (see the map) and also a mountain road, which is closed for public traffic. Above this meadow the summit of Kosmatica / Kosmatitza (Hairy), 1659 m, rises. As its name implies, the summit is overgrown with trees and offers only little panorama. Still - visit its humble cross which can be a cute goal of a small hike.

Kosmatica / Kosmatitza round tour: From the farm of Bodenbauer / Podnar a nice, not too long round tour can be done. We go by the valley till the Maerchenwiese, continue towards the Ogrisalm / Ogrizova planina and from the meadow on Kosmatica / Kosmatitza. From the very top better don't continue towards the north, rather return some 50 m to the meadow and there find the good, marked path, crossing the E slopes. We descend along the main ridge, but on a few places it's worth going up those few meters to have a look down into the Strugarica valley. Picturesque, eroded ravines there, with some rock towers. Lower we deter from the main ridge and soon hit a cart road which brings us to the Ogriz farm. Then back across the valley to the Bodenbauer / Podnar, visiting before the farm also the cute Meerauge (Sea Eye) pond. 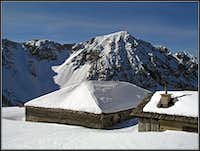 Geissberg / Kozjak can be ascended any time of the year. Also in winter the tour is often possible, very nice for tour skiing, if the slopes are really hard and icy you might need crampons and ice pick.