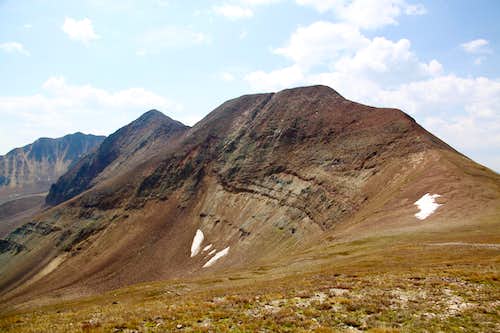 Gravel Mountain and UN 13688 as seen from the east ridge, which at this point turns to the south 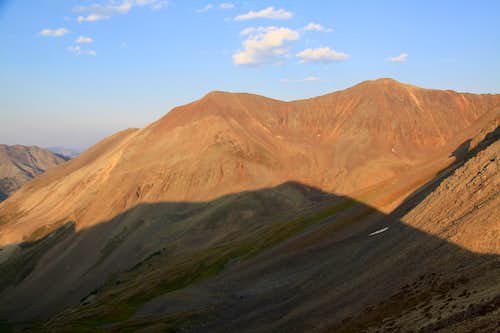 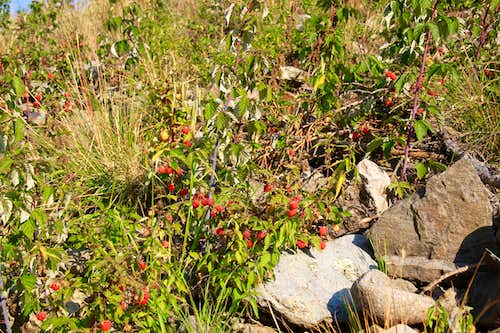 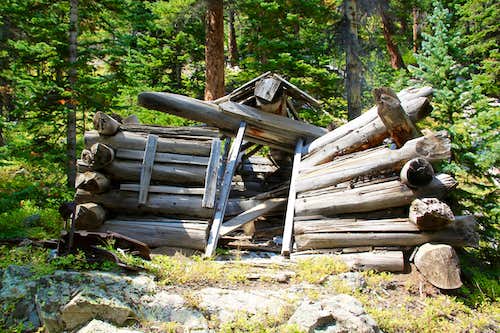 Old miner's cabin
Gravel Mountain is relatively easily accessed from Colorado Scenic Byway: Alpine Loop. The entire route is a rough four wheel drive and you do need a high clearance 4WD vehicle. The road closes late in the fall and opens in June.
Alpine Loop connects San Juan Mountains town of Ouray, Silverton and Lake City, and navigates between two mountain passes: Engineer Pass to the north and on the southern route Cinnamon Pass.
The road is well marked.
You can access Gravel Mountain and Unnamed 13688 from the summit of Cinnamon Pass if planning combination with Wood Mountain, Unnamed 13708 and "Animas Forks Mountain". Expect a more difficult terrain, loose class 3 to summit Unnamed 13688 from this side and then an easy traverse over to Gravel Mountain.
If planning to climb Gravel Mountain and Unnamed 13688, you have to drive on Engineer Pass Road and either turn into Hurricane Basin or park below it.

As any mountain there are many different route up it. I chose to combine Gravel Mountain with Unnamed 13688 since I have done all the nearby peaks on its southern side. This route is easier and I would consider it even in the winter if avalanche conditions stable. I chose a little bit longer approach, but there is a possible short cut from Hurricane Basin making it much shorter. My goal was a long high altitude hike to get me "ready" for Imogene Pass run.
If coming from Wood Mountain side expect a rather technical and loose terrain between Wood and UN 13688, but the advanted is a combination with other high 13ers in the area (you can get 3 ranked bicentennial peaks: Wood, "Animas Forks, and Unnamed 13688).
East ridge taking a turn into North Ridge: I accessed this ridge from the Lake City side of Engineer Pass road at the point where there are waterfall coming down from Horseshoe Basin (see photo). Cross the Henson Creek and head towards the waterfalls. There were tons of raspberries around Henson Creek, which I really enjoyed on my way back. I bushwhacked and followed some game trail on the western side of the waterfall into a forested area, continued up until above timberline. There was a short rocky section and above it the ridge was easy and the sub summit of Gravel Mountain was seen. I went over a false summit, dropped slightly down and here the ridge turned south - north ridge. It was an easy stroll from here to the summit. There was a small cairn at the summit and glass summit register.
Shortcut from Hurricane Basin: this would be accessing the ridge much higher up, and making your outing much shorter. Expect a little more loose terrain, but still class 2. Drive to the turn off for Hurricane Basin, at the start of the basin, park and head up the grassy slopes as high as you can. Continue up on scree, and you should reach the false summit of Gravel at the point where the ridge is turning to the south.
Traverse onto UN 13688: There is a small path linking these 2 summits. The walking is enjoyable at class 2 with some mild exposure. Views are spectacular. The distance between Gravel Mountain and UN13688 is 0.41 miles and the escape from the traverse is not easy, make sure that the weather holds up. You do not want to be up there is a thunderstorm.
South Ridge - traverse from Wood Mountain and UN 13688: descent slightly on the west ridge of Wood Mountain, bypass steep towers and pinnacles on a very technical and loose ridge leading to UN 13688. Descent into Hurricane Basin about 100 meters and look for the easiest gully leading back up the south ridge of UN 13688 while bypassing the technical towers, pinnacles above. Expect loose scree, loose rocks and lots of steepness, class 3 sections. Once back on the south ridge, the terrain becomes easy. From the summit of UN 13688, continue on easy ridge to Gravel Mountain. If you have a shuttle, you can descend Gravel Mountain, otherwise you have to return back the same way.

Driving scenic Alpine Loop is free. There are enough parking places along Engineer Pass and Cinnamon Pass Road. Expect a lot of alternative off road vehicles during the peak summer months. Hiking is free.

Summer and early autumn is the easiest since you can drive to high up on Engineer Pass or Cinnamon Pass roads. Winter and spring provide a more difficult access, and you have to travel through avalanche prone terrain. Check avalanche conditions prior venturing out there in the winter - Northern San Juan Avalanche Information Center. The alpine scenic loop is usually open to motorized vehicles in June and closes with the first big snowfall - late October, early November.

Primitive camping is available along the Engineer Road or Cinnamon Pass roads at various turn offs. I have slept in the car at the top of both passes.
Developed campgrounds are closer to towns - Eureka Campground on Silverton site, or here is a list of campground in Lake City area.