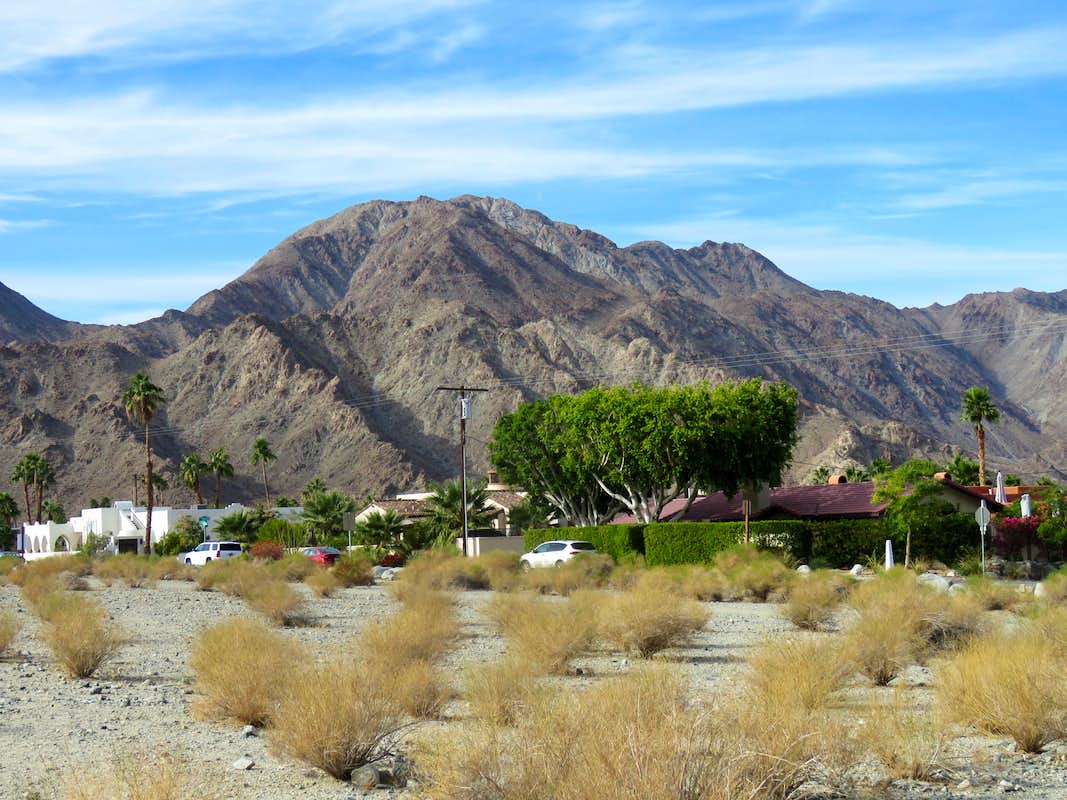 A good place to park is at the designated parking area for Bear Creek Canyon Trail in La Quinta, CA (you will obviously not be following Bear Creek Trail). From I-10 near Palm Springs, take Exit 139 to Jefferson St. and drive 5.75 miles south. Turn right (west) onto Avenue 52 and go 2.5 miles then turn left (south) onto Avenida Bermudas. Go to the end of the development where you will see designated parking areas on the left.

Starting Point Elevation: 310 ft Elevation at Lowest Point: 190 ft Summit Elevation: 2226 ft Distance: 7.5 miles loop hike as shown on map This is a description of my counterclockwise loop hike as shown on the map. From the parking area, I headed west hiking along Calle Tecate Street to a concrete pathway know as Fred Wolff Bear Creek Trail. Turned north and followed the concrete pathway downhill until I could see the 1820 ft saddle to the north of Indio Mountain to my northwest. I left the concrete pathway, headed west crossing a dry wash and going on a boulder covered flood plain. Continued northwest toward the 1820 ft saddle. 1820 ft saddle
The plain tapered to a canyon. At an elevation of 800 ft, I reached a dry waterfall creating an impassible barrier to me. Dry Waterfall
Went up the rocky slopes on the left (southeast) side of the canyon and climbed a 5 ft tall wall to a catwalk that allowed me to bypass the dry waterfall. Looking down at the dry fall from the catwalk. Dry waterfall from the catwalk
The boulder filled canyon continued beyond the dry waterfall . Looking back at La Quinta. Looking back at La Quinta
Horn on the slopes of Indio Mountain. I then reached the broad 1820 ft saddle. Looking north toward Point 2100 ft and Eisenhower Mountain. 1820 ft saddle
Went up the slopes to reach the summit of Indio Mountain which turned out to be a large area with many piles of boulders reminiscent of what I had seen in Joshua Tree National Park. It was hard to say which pile was the summit. I then reached the 1500 ft saddle between Point 2121 ft and Coyote Benchmark. Looking southeast toward La Quinta. From the saddle, I followed a faint trail toward the dry wash and Fred Wolff Bear Creek trail. La Quinta and Peak 1601 ft. Winter is the best time to climb. summer can get dangerously hot.