The Lake Creek/Trail Creek Divide runs northwest to southeast just northwest of Ketchum and plays a major role in topography in the immediate area. Although none of the summits are largely significant, nor particularly attractive, their popularity and steepness more than qualify them as submissions.
Rock Roll Peak begins the divide's nearly 10 mile trek into the heart of downtown Ketchum.

Along those 10 miles, two, highly used summits, one, somewhat minor summit, and a variety of activities on the others, make the Lake Creek/Trail Creek unique to other mountainous ridgelines in the west.

Triple Peak on a fall day. 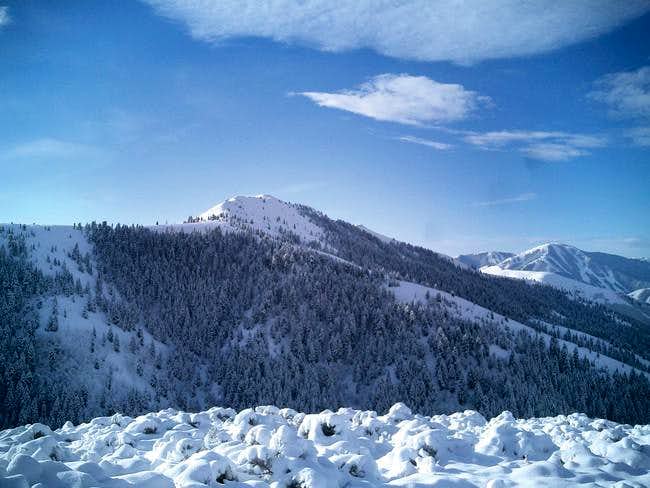 Standing a meager 8,938' elevation, Triple Peak's character is derived from its summit, none other than three, pointed tips rising in elevation moving from south to north. When viewed from Ketchum, Triple Peak is a large complex of ridges and gullies that appears like a giant mound of dirt that rises 2,200' from the valley floor. Its true beauty comes from Triple Peak's dramatic avalanche chutes, small streams, and dense vegetation that face the upper Lake Creek Drainage.

Its superior year-round access, consistent pitch, and low exposure make Triple Peak another one of the popular backcountry skiing areas around the Sun Valley area. However, don't be fooled by its status as a small mountain. Avalanches have trapped even the most experienced skiers with near-death incidents in the past few years.

Triple Peak is a grueling climb because of its relentless pitch and thick brush but is a perfect early season conditioning peak. Its south face is usually snow free by Late March, while its northern chute provide excellent snowshoe conditions well into late spring. Because of its relatively low elevation, Triple Peak is free of scree fields- a rarity in central Idaho peaks.

Access is possible from either Lake Creek, or from Trail Creek. Due to the open nature of the mountain, a scramble up any of the multiple gullies is feasible. However, I have climbed almost all of these canyons and found the following to be most suitable for a hiker.

Northwest Ridge: Drive north of Ketchum on Idaho 75 until reaching Lake Creek on your right. From the turnoff, it is roughly 2.4 miles on an improved dirt road to the spot for access to the northwest ridge. Cross the Lake Creek Drainage aiming for the ridge that form a crescent shape before heading up to the summit of Triple Peak. Gain the ridge and continue uphill. After approximately 1 mile you will crest the Lake Creek/Trail Creek Divide. From here, turn south and after half a mile of obstacle free terrain, you will reach the highest point of Triple Peak.

The only other practical route involved a traverse from the summit of Sun Peak (see below). From Sun Peak, drop to Saddle 7,267', then hike the ridgeline over all three points of Triple Peak to the summit, the first block being the most difficult.

Sun Peak from the Lake Creek at sunset. 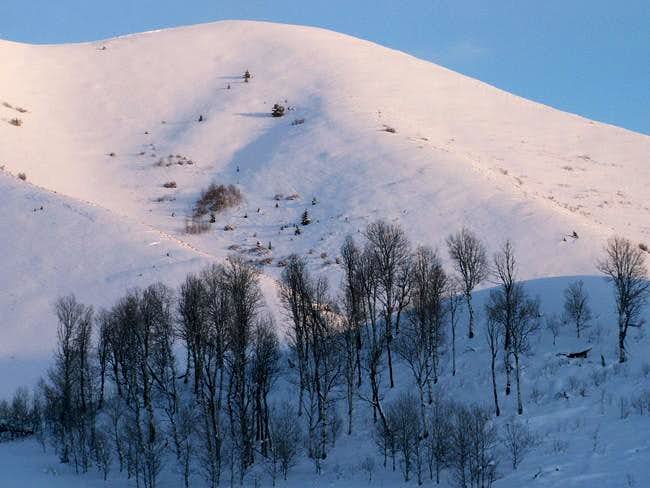 Sun Peak is a rather unattractive that looms over the horizon of Ketchum and Sun Valley. Almost the entire mountain is made up of nothing but sage, grass, and relatively steep slopes. No rocks, forests, or special characteristics can be found on Sun Peak. But its location smack-dab in the middle of the Wood River Valley, makes it an outdoor enthusiast's playground year-round. It is a class 1 hike from every approach, with the primary access being Trail Creek. It is popular in winter and spring to for back country skiers to park one car on the Lake Creek side, then drive to the Trail Creek side, hike the barren south slopes and ski down the north face into Lake Creek back to the other's car.

Pending and future development threatens to block almost all access to Sun Peak. Prestigious homes and private property block most of the Lake Creek side, while the newly updated Sun Valley Master Plan for development calls for numerous subdivisions encircling the base of the now home-free Trail Creek side of Sun Peak.

Access to the summit of Sun Peak is from a well-worn trail not shown on any maps. Drive northeast from Ketchum at the Sun Valley Road stoplight for 2.15 miles. This brings you straight to the base of the south ridge. Directly across the road where it meets the south ridge is a small paved pullout with no official name. Park here. Cross the road and look for what locals call "Cardiac Arrest" Trail.

The Cardiac Arrest Trail has been in the local spotlight the past few years. Because of the trail's steepness and lack of switchbacks, it had begun eroding the mountain. A group of locals went to the local city council and requested to restore the trail and vegetation. The city council in turn closed the trail indefinitely to the dismay of many. Their plan had backfired. Since then (summer 04) a large sign has been erected at the trails beginning. The sign has been, vandalized, knocked down, stolen, and finally turned the other way. The city council has since given up the idea of closing the trail for restoration purposes yet still will not grant approval to the folks who wish to fix it up.

Cardiac Arrest begins up Sun Peak with impressive pitch for a trail and is quite difficult on the descent. After one mile of difficult class 1, easy class 2, terrain, the trail reaches Sun Peak's false south summit. The trail then looses definition but it is an easy .25-mile traverse to the true summit of Sun Peak to the north.

Peak 9,557 and the surrounding ridgeline during a winter sunset. 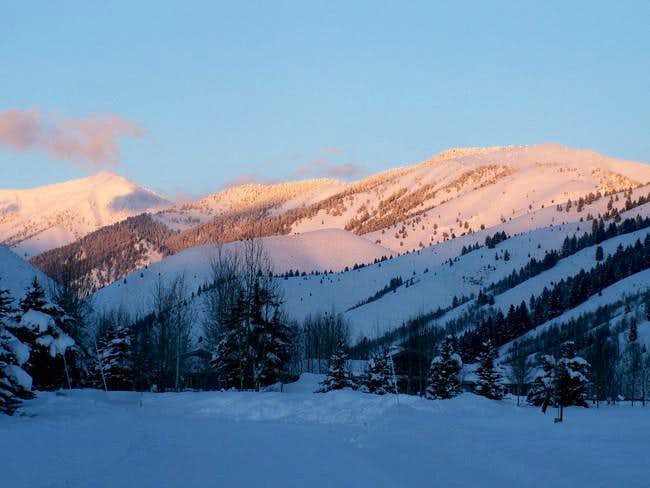 Not quite a "peak" but the highest point along the Lake Creek/Trail Creek Divide. Peak 9,557 is quite steep from all directions, especially when viewed from Trail Creek where its southeastern face plunges 3,100' in less than a mile. Its northwestern face is so deeply forested and precipitous that conditions become impassable with snow hanging around for most of the year. However, what may stand out most about Peak 9,557 is its southern face. On a Divide that is very steep for its entire length, Peak 9,557's relatively mellow and broad south face, which boldly faces the Lake Creek Drainage, is a unique feature to the area. A note of interest, a high concentration of the rare White Bark Pine trees are found dotted along the south face, their lightning struck, mangled bark and shrub-like appearance make them quite the conversation piece.

South of Sun Peak the ridge drops abruptly in elevation and distinction. But just because they aren’t mountains, doesn’t mean you cant have fun on them hills, this are may have the most varied use of mountainous terrain anywhere. Moving south from Sun Peak, the ridge separates Trail Creek from the Big Wood River with bare, small ridge with a high point of, 331’. From the valley floor, this ridge appears as a plain, little hill in Ketchum with million dollar mansions dotting the base. However, the locals know the secret of this flat-topped mountain. A Nordic trail from the Sun Valley Nordic System on the Trail Creek side, climbs steadily toward the top of the ridge and makes an entire loop well above the valley. This notoriously difficult Nordic loop is called Diamondback.

Not only is this ridge used for breathtaking Nordic skiing, the Sun Valley Gun Club dots its lower slopes and is used in summer.

Just south from the 6,331' highpoint, and across the road, is Penny Mountain. Penny Mountain is a three-summited point with a high point of a meager 6,137' that separates Ketchum from Sun Valley. On the northern end of Penny Mountain lies Penny Hill, what may be one of the very few designated sledding hills of the US. Here, on the northern slopes of what is just a hill, hundreds upon hundreds of people converge on Penny every week in the winter to enjoy the view and deal with the occasional boo boo.

The ridge finally begins to die out in Downtown Ketchum, not without a last hurrah though. Visible from almost any part of Ketchum, Knob Hill rises a meager 80' in the center of town. Named for its shape, a broad-based slope with rock poking up in the center, Knob Hill has somehow retained some of its integrity. Surrounded by multi million dollar homes, it was saved from complete destruction and designated a city park. Now, a small path leads between the mansions and too the summit, but you may be in for a surprise as the very top requires a steady class 3 climb though it is such a small distance, any 8 year old with the right shoes could run straight to the top. From the summit you have a wonderful view, and it is a perfect area to get acquainted with the Ketchum area.

These mountains can usually be climbed fairly early in the season. Sun Peak and south usually by april, while the northern portion of the divide is accessible may into june.

Many high quality, designated camping areas can be found either up Trail or Lake Creeks. While a quaint hotel, The Knob Hill Inn, can be found sitting on the northern slopes of the Knob Hill in downtown Ketchum.

No permits or fees required. It is asked that in early spring that on the Cardiac Arrest Trail up Sun Peak you please wait until dry to preserve the condition of the mountain.

The weather in and around Ketchum varies greatly from season to season. During the winter months, typically late september through late may, strong Pacific westerly winds carry abundant moisture through the area making it the wet portion of the year. When these storms move through, orographics play a much larger role in Idaho's mountains than many other areas in the west. For the Sun Valley region, storm systems with a northwest or west to east flow loose much of their moisture to the Boise, Sawtooth, and West Mountains, even with stronger disturbances. For those of you not familiar, this is called the rain shadow effect. A storm system with movement from an southerly component slams the area as the moisture from the Snake River Plain move into the mountains, the moisture is lifted and released as snowfall (orographics)

The summer months are usually on the dry side with the common afternoon thunderstorm threat ever present. For latest conditions for the Wood River Valley go Here