Ryan Peak is the highest mountain in the Boulder Mountains of central Idaho. The Boulders are famous for showing off their brightly colored limestone faces north of Sun Valley, their sheer, crumbling, cliffs which still, have never been touched, and of course, their many, many mountain goat herds. But Ryan Peak is somewhat illusional in a sense that it is hidden, and has no real appealing quality whatsoever, yet because of its "highpoint status", it sees by far the most traffic of people than any other mountain in the region. 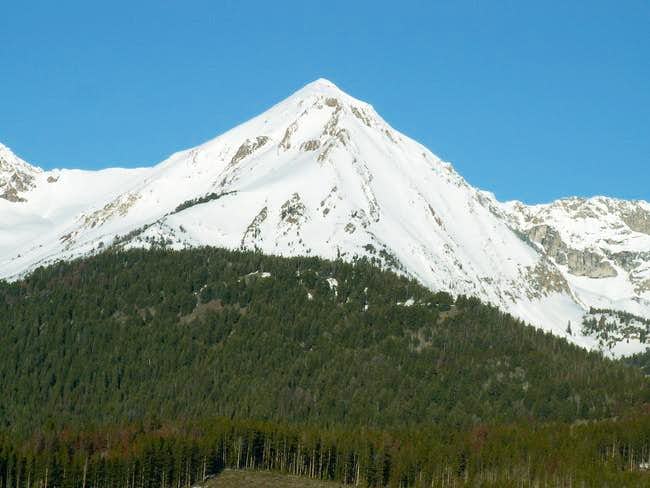 Named for Mike Ryan, and early Wood River Teamster, its perfect pyramidal shape is not easily seen because of intervening mountains. Though requiring a bit longer approach than most other Boulders, Ryan can be enjoyed by many because of its non-technical nature. Two class two ridges form nice approaches to this somewhat giant, yet elusive mountain. Many people from the area often confuse Kent Peak for Ryan, this is because when viewed from the Wood River Valley, Ryan sits behind Kent, therefore tricking ther eye to think it be lower.

The first ascent made on Ryan was made by E.T. Perkins and W. Griswold in 1894, Perkins Peak and Griswold Peak honor these gentlemen just to the west. Though not a dominating mountain as we see it, Ryan Peak is important geologically. It sits at the headwaters of not only Pass Creek (which shortly becomes the almighty Salmon River), but also the North Fork of the Big Lost River forms on its eastern slopes.

Getting There and Primary Route

To access the primary starting point for Ryan Peak (I would estimate the 95% of traffic uses this route), begin in Ketchum. Drive north of Ketchum on Idaho 75 and turn off at the Sawtooth National Recreation Area Headquarters, or after where all the mansions end. This road quickly takes you into the heart of the Boulders in 5 1/2 miles. The last mile could be a little bumpy but the drive in is pleasently mellow, passing a church and camp along the way. Park where the road ends in a small forest and begin here.

There are two major trailheads located at this point, one major mistake if you take one, and one majorly confusing other. Take the the confusing one. Head to the north side of the parking lot and begin on the North Fork Big Wood River trail, or FST 128. If you are starting this hike nice and early, the beginning will give you a nice, yet crewl, warm up, straight up a hill. After ascending out of the valley from you just came, the trail then drops down into the North Fork Wood River Drainage bringing wonderful views and about a mile of easy going. Note: There is horse route along this trail, DO NOT take it unless you feel like swimming your way to Ryan Peak. 1.5 miles from the trailhead, a small rock cairn, and nothing else, marks the turnoff for your next trail. The faint looking West Pass trail heads to the right in a small meadow. This trail is difficult to find, If you are unable to pin-point the turn off, just hike pass the opening of the canyon to right, and bush-wack your way northeast until you come across it. The West Pass trail takes you on some long switchbacks but eventually becomes steep, and consistant, bringing you high into the unnamed valley below Kent and Ibex Peak. The trail then veers around to the north on some more swtichbacks. After a falso summit and some more thigh-burning terrain, you reach West Pass at a little over 10,200 feet. From the pass. head west up the ridge immideately to your right. This next thousand vertical feet is on terribly loose scree and will certainly wear your legs. In some years large groves of Lupine form on parts of this ridge, if they are there, head towards them as the will provide better footing for this greuling portion of the scramble. Once on Ryan's south ridge it is an enjoyable and breath-takingly beautiful class 2 walk to the summit.

We dont know the meaning of this term in Idaho! This mountain is free of any restrictions or fees.

Though Ryan Peak is high in elevation for this region (11,714'), its south to south-western exposure makes its climbing season a tad longer than most other Idaho mountains. Late June to the end of September is usually feasible for a snow free hike. Ryan's remoteness in winter would make a snow ascent quite difficult but possible.

General information for the Boulder Mountain areas can be found at the Sawtooth National Recreation Area website.

You will find some splendid, designated camping spots along the North Fork Road just before the trailhead. Of if you dont feel like sleeping in the bushes, many hotels are just 7 miles to the south in Ketchum.

The following is also incorrect: "The trail then veers around to the north on some more swtichbacks. After a falso summit and some more thigh-burning terrain, you reach West Pass at a little over 10,200 feet. From the pass. head west up the ridge immideately to your right." You would want to take a right and head East, not West once gaining the West Pass Ridge.