Silver Peak...named for its location above an old mining town. 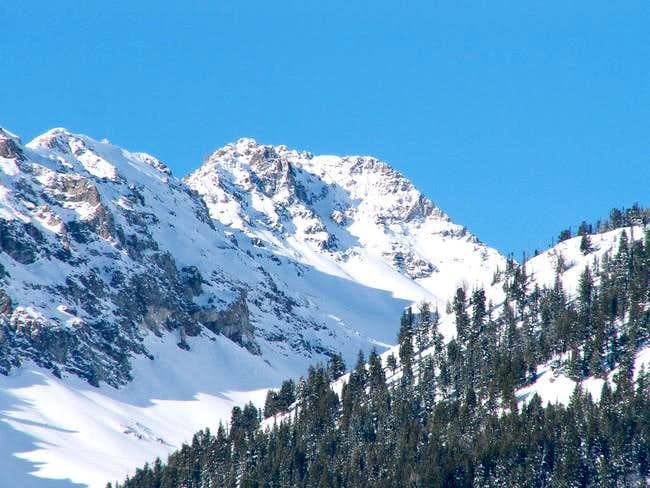 Silver Peak rests squarely on the main crest of the Boulders north of Ketchum. While other peaks around this area spike out on long north/south running ridges, Silver Peak hides well to the north making it difficult to a good look at this rugged mound of rock. Nonetheless, its unique position at the apex of the rounded smile that the Boulder front makes north of Idaho 75, gives it, bar none, the most spectacular views of the most rotten range in Idaho (see summit photos below). Silver Lake, which lies directly at the southwestern base of the mountain is a popular local hiking spot though few people make it up to the summit due to the fact that Silver Peak presents a much more ominous feel than actually is. Approaching the mountain from any direction requires class 3 climbing skills and a drive most likely to beat your car up, I know it did mine.

There is one commonly used route up Silver Peak, thought there are possible others, this one is relatively short and requires little technical experience. From the center of Ketchum, drive 15.8 miles north on Idaho 75 to Silver Creek Road. Turn right and cross the Big Wood River on a stable bridge. After driving towards the north a few miles, the road forks twice. Keep to the right both times. You will begin to climb fairly steep out of the valley onto a ridge. The road becomes increasingly rough as so do many other roads in this area. Four wheel drive is a must towards the end where two steep switchbacks are followed by a few comments such as, "is that really the road?" Park at the end of the road, or at small stream and on the 8,400' contour line. Follow a faint trail north up Silver Creek Valley for about two, moderately steep, miles to Silver Lake. From the lake, hike due east up a large shale slope for about 1,000'. On the first few hundred feet there are trees and fairly nice footing, afterwards, it is a tortous scramble to the south ridge on very loose steep scree. Once you've gained the south ridge the summit block of Silver Peak comes into view. From here it looks like a rough, cliff-filled approach. But as you near, and begin to ascend the block, it is quite a nice scramble up. Many small gullys and cliffs are intwined in this portion of the hike, stay on the western side to find the best route. Don't think you are at the top as many of the pointy rocks turn out to be false summits.


Unsurpassed Views of the Boulders

Sorry for lack of photos on this page. Went with a group of people and most are with them in the picture.

Silver Peak and the immediate surrounding areas have a very high concentration of mountain goats. Ocassionally there are voluntary closures in the spring for certain areas due to this but never mandatory ones. No parking passes, permits, or fees are needed to access this peak.

The mountain is usually climbed in the high summer when the snows have melted away, but it is not out of the question for those brave at heart to begin the long ascent in winter from Idaho 75 to ski the western face of Silver Peak.

If you wish to camp closer than the many, many campgrounds off of Idaho 75, there is plenty of room to pitch a tent around the scenic Silver Lake, which lies just beneath the peak.

Due to this portion of the Boulder Mountain's unique terrain, it is quite common in winter to have localized snowstorms settle comfortably into the deep crevased valleys while the remainder of the area remains under blue skiies (similar to the Cottonwood Canyon of Utah.) Contact the Sawtooth National Recreation Area for further information on this area 800 260-5970