Malorey Peak sits on the main crest of the Boulder Mountainsat 10,589' in central Idaho. It is a rugged peak with outstanding features. Its north face contains an 800 vertical foot drop providing breathtaking views from the Trail Creek Side, while southwest slopes stand prominently high on the horizon for those driving on Highway 75. 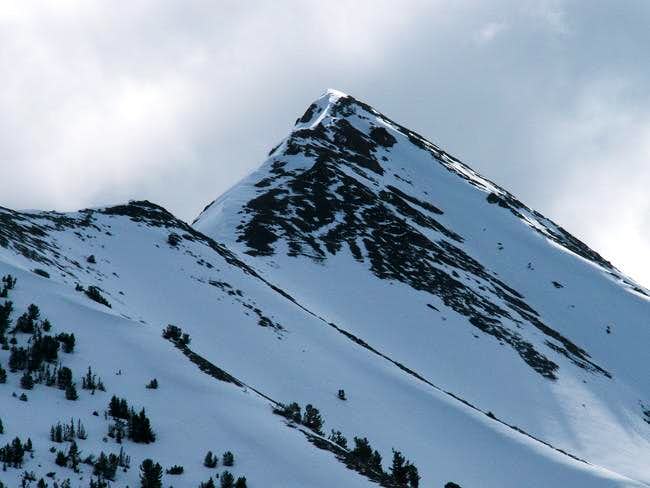 Malorey Peak forms the highpoint along the impressive Murdock Creek head wall and is commonly admired only from a distance. It sits just southwest of its twin summit, Murdock Peak.

This mountain is seldom, if ever climbed. It is isolated and the only approach requires a 5-mile trek back into this wilderness. Although no technical skill are required to summit, the route up rugged Murdock Creek demands great stamina.

Murdock Peak also sits squarely on the main crest of the Boulder Mountains at 10,564' in central Idaho. Though not as impressive as its twin summit Malorey Peak, it is certainly a worthy goal. 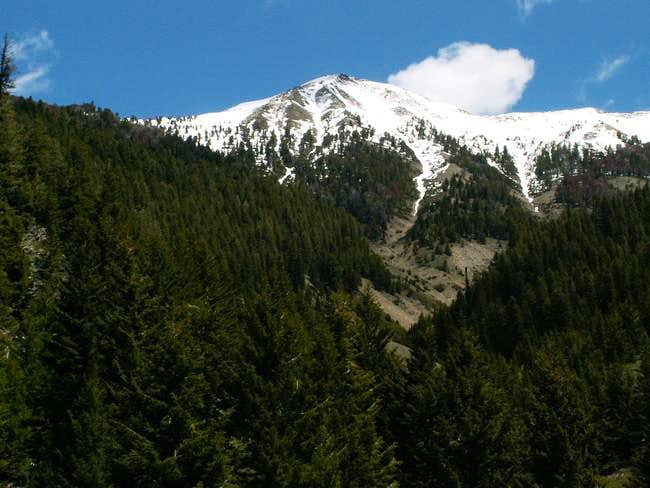 Murdock Peak is not as steep, nor rugged, as Malorey Peak but because of its position, it sits proudly over the twisted Murdock Creek Valley making for fanstastic views for those camping in nearby North Fork. It doesn't have preciptious drops but is round nature and quite steep.

Murdock Peak's summit is reached only after a long approach with significant elevation gains. Therefore, it is rarely climbed. In fact, my research has shown, that my ascent was the first ever, however, it has undoubtedly been climbed before.

The approach to these two mountains requires a complete full day as well as excellent back country knowledge and strong legs.

This route should not be climbed when high water is present!
Many stream crossings are necessary.

To access, drive north from Ketchum, Idaho on Highway 75 for 7 miles. On the right you will see the Sawtooth National Recreation Headquarters. Turn right following the signs and continue past the funky looking building.

After about 2 miles a broad canyon will open up to your right and display a wonderful view of both peaks. The improved dirt road procede to cross the North Fork Big Wood River on a single lane bridge. After the river crossing the brown sign will clearly mark the trailhead for Murdock Creek to the right.

Take this short access road that is appropriate for all vehicles for about a quarter of a mile. You will then find a small parking area for the trailhead. Sign in at the register and you're on your way!

Murdock Creek, as I've mentioned, forms a craggy and unforgiving canyon. If not for the Murdock Creek Trail, it would be completely impassable.

The Murdock Creek Trail begins quite mellow and shortly fords the stream. After about 1 mile the canyon closes sharply and the trail climbs steeply onto the north side.

The trail will continue to move up and down abruptly along the canyon for 2.5 miles. Once you have entered the grand basin below both peaks the trail takes another sudden turn and begins switchbaking up the southwestern slopes of Murdock Peak. 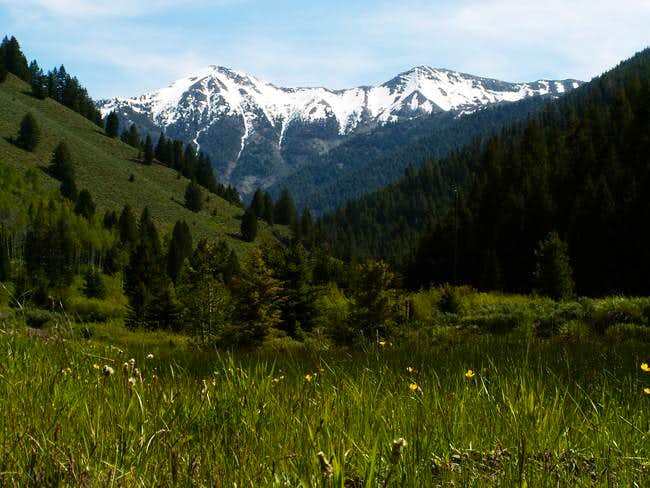 These switchbacks end shortly at the base of a rock outcropping. This is the end of an established trail. Climb up and over these relatively stable rock and continue ascending the moderately steep ridge.

Once you have broken out of the trees at roughly 9,800', Murdock Peak's summit block will come into view. Turn eastward and climb 800' on some loose rock. This brings you to the summit and rewards with postcard views.

To ascend Malorey Peak, climb down to the saddle that seperates the two mountains. Although Malorey Peak's summit looks intimidating, it is not challenging. Hike up the ridge staying on the south side for best footing. No technical climbing is required for Malorey Peak either, yet the ascent is much steeper than its twin.

From the summit you have to options for a return to the trailhead. One is two retrace your footsteps and climb Murdock Peak once again. The other is to slide down the face of Malorey Peak. The alternative route follows.

The entire Murdock Creek Canyon is included in the Boulder-White Clouds Wilderness Initiative Bill, an outcome on whether it will be passed or not is pending.

The climbing season for these two peaks range from late-June to early October.

An out of season climb would require a start from the Sawtooth National Recreation Area Headquarters located along Highway 75. This would be a very long and arduous route, not to mention dangerous due to high avalanche danger.

These peaks would be much easier if done as an overnighter. However, because of the terrain out Murdock Creek, tent-camping is limited.

There are however several good campsites and campgrounds along the North Fork Big Wood River Road, near and around the Sawtooth National Recreation Area Headquarters.

It turns out this peak has been misspelled on this page (which has led to it being misspelled elsewhere too). The proper spelling is “Mallory Peak”. The mountain is named for Idaho pioneer photographer Martyn Mallory, whose work can be seen at the Hailey public library.