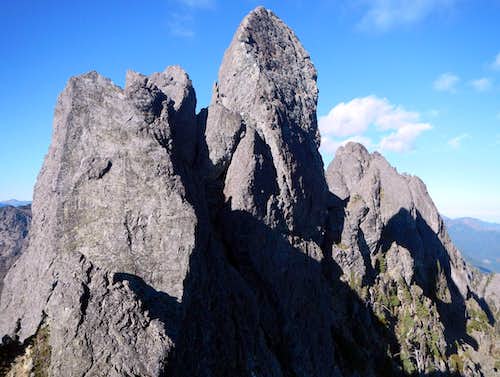 “On the false summit I felt the star ignite. And it would burn bright so long as that fang of basalt was poised to rend me, that sea of space awaited to drown my dying howl. Bob hadn't told the half. Monie was too preoccupied to try to laugh me out of jaw-drooping, bug-eyed silence. What was scaring her? I didn't know. What was scaring me was the Thing of nightmares when I was a kid terrified by God and Hell, the Thing now symbolized in broad daylight by that horrid thrust of lava.” Read more from this climb. 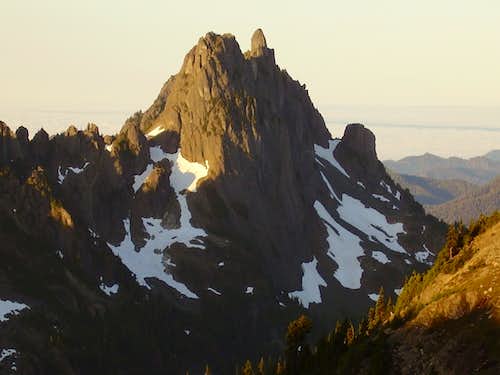 The previous quote is how Harvey Manning described his reaction when he first laid eyes upon the summit block of Mount Cruiser. Mount Cruiser is the high point of Sawtooth Ridge in the Olympic Mountains on the Olympic Peninsula of Washington. Nestled between Flapjack Lakes to the west, Mildred Lakes to the east and Murdock Lakes to the north, Mount Cruiser is probably one of the best classic climbs of the Olympic Mountains. Sawtooth Ridge itself features numerous craggy spires from Alpha at the northwest terminus to Mount Lincoln at the southeast terminus. The first ascent of Mount Cruiser took place in 1937 by Paul Crews and Ray Layton and they named it Cruiser after their club the Bremerton Ski Cruisers.  This first climb was completed with a 30-meter rope which made the initial descent problematic.  The ski club built a ski cabin at Flapjack Lakes in that same year of 1937 and had planned to build a road to access the cabin, but the creation of Olympic National Park stopped the road-building plans and in 1948 the cabin was dismantled and removed by the park service. 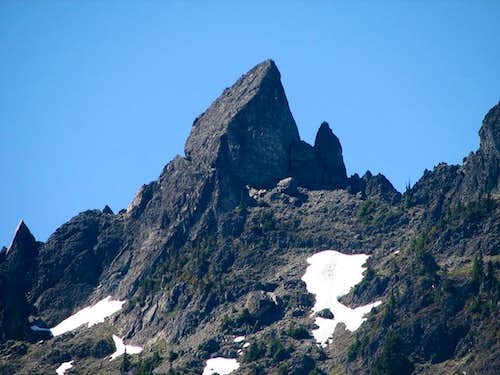 There is no scrambling route to the summit of Cruiser and the easiest “south corner” route is a technical rock climb rated at 5.0. Olympic rock, in general, is known for being loose and dangerous, however, the rock on Sawtooth Ridge is considered fairly solid by Olympic Mountains standards, albeit difficult to protect. For the more advanced climbers there are a number of more technical routes to choose from. 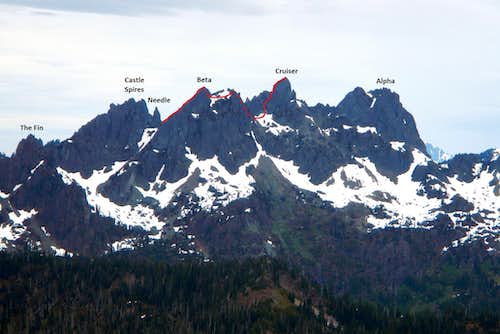 There is extreme exposure on all sides of Mount Cruiser with exposed 4th class on the approach. The standard approach also features a snow gully below Needle Pass, which can be icy and will require crampons and ice axe for most of the year. Later in the season this gully can melt out completely revealing chossy steep dirt. Some parties prefer to rappel the upper half of this gully during the descent. Do not attempt to ascend the gully if it is snow-free and another group or goats are above you. Rock fall is a serious hazard! 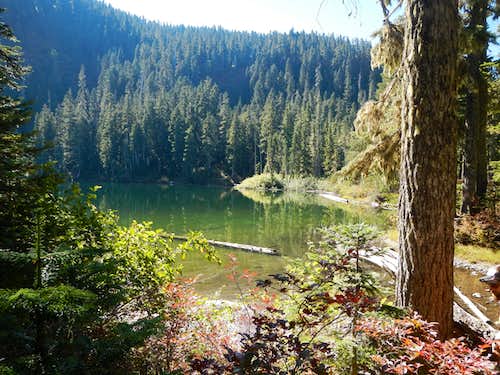 There are two main ways to access Mount Cruiser. The standard approach begins at the Staircase Ranger Station and makes use of the Flapjack Lakes / Gladys Divide trail.  It is 18 miles round-trip with 5500 feet of accumulative gain.  The alternate route (not described here) begins at the Mildred Lakes trailhead and ascends off-trail from Mildred Lakes.  If you are thinking of taking the alternate route, be aware that it is very brushy above the lakes and not suitable without snow-cover. 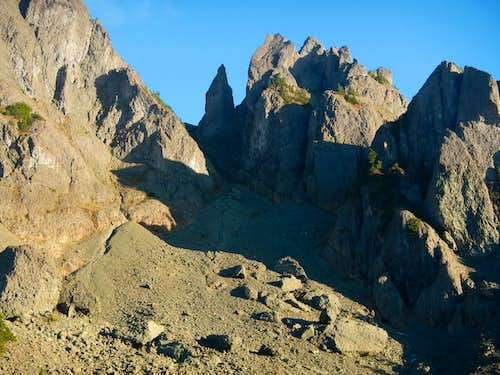 Cross the bridge over the North Fork Skokomish River and hike 2.7 miles to the next bridge crossing. Turn right at the junction and cross the bridge to the north side of the river. Turn left at the junction on the far side of the river and hike another 3.5 miles to the signed Gladys Divide / Flapjack Lakes trail junction. Turn right and hike uphill for another 2.2 miles crossing Madeline Creek bridge along the way. The trail becomes steep as it enters the Donahue Creek drainage. Turn right at the signed junction towards Flapjack Lakes. The left fork goes to Black and White Lakes.  Between the bottom of the valley and Flapjack Lakes, the trail gains 2300 feet. 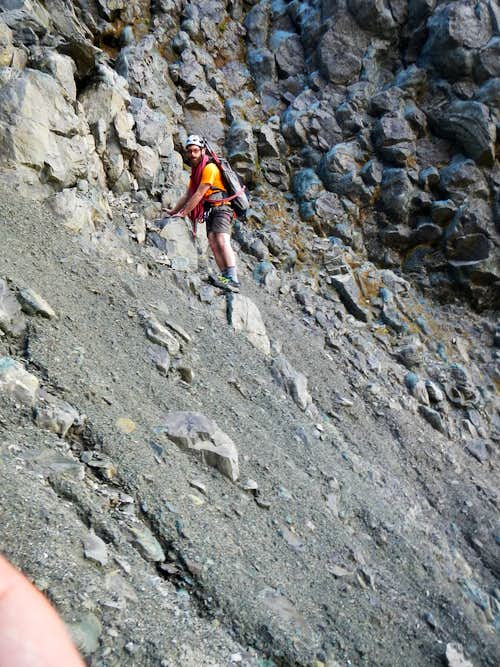 Olympic Choss Below Needle Pass
At Flapjack Lakes, camping and fresh water are available. Better water can be found in a creek further up on the trail. Continue towards Gladys Divide which is 2 miles beyond Flapjack Lakes. Just before the pass, turn right and cross a small talus basin choked with giant boulders and broken rock. Needle Pass is visible 700 feet above, guarded by The Needle. In early season and mid-summer, the gully below the pass is filled with icy snow. Occasionally in late summer the pass is melted out and then steep loose dirt and rock are exposed. Crampons ice ax and/or helmet are usually necessary items here. 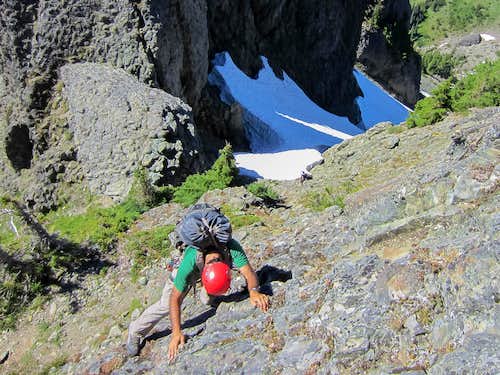 Scrambling Above Needle Pass
At the pass turn left (north) and scramble exposed class 3 to the summit of subpeak Beta. If you encounter class 4 you are off-route. Be cautious of loose pebbles and dirt covering the more solid rock. From the summit of Beta you will have the first full view of Cruiser.  Descend 5 feet northeast to a small notch between the two points of Beta.   Look for two separate heads leading down into the same northeast-facing gully. Both entrances into the gully will work but the right hand one is easier and shorter. Scramble down a single class 4 move in the right entrance and descend snow or steep dirt to some small trees and ledges (or more snow). Zig-zag down the ledges to exit the gully and turn left. Traverse north 100 yards to the open talus and boulder slope.  If the gully is full of snow and looks formidable, an alternative is to scramble down the northeast ridge of Beta but this is likely class 4. 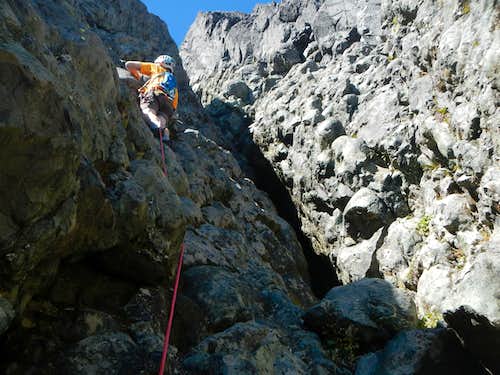 Chimney Gully
At the far end of the talus slope is the final cliff separating you from the actual summit block.  Locate the head of another gully leading down to the northeast through the cliff.  This gully is twice as long as the previous one.  Again, descend loose dirt (or snow) to reach the more gentle slope below.  At the bottom of the gully traverse northeast to the base of the very steep rock gully with a chimney at the back.  Rock along the left side of this gully tends to be class 4 for the first half and then easier class 3 above. The top of this gully is blocked by a gigantic chock stone that splits the gully in two.  The left side can be scrambled by crawling through a "cannon hole" tunnel while the right side can be climbed with little or no protection at 5.0R.  Most parties opt to scramble the left side.
Above the gully and cannon hole is a large platform big enough for several groups.  The platform narrows at the northeast edge and becomes a ledge.  This ledge is where the "south corner" 5.0 climbing route begins.  The first move is overhanging but a nice crack can be used to place initial protection.  Furthermore, the ledge has a large boulder that contacts the wall and this can be slung for a belay anchor.  Overall, the first 70 foot pitch offers little in the way of protection aside from a few bolts.  Some are new and trustworthy.  Others are old, rusty and loose.  There is a slightly loose 1/4 inch bolt about halfway up just to the left of the route. There's also a very very old rusty 1/4inch bolt backed up by an even worse looking piton next to it some 10 - 15 feet below the belay station (look left near ridge crest).
The first pitch ends at a small ledge big enough for 2 or 3 people.  There are two solid new bolts there.  The second pitch is class 3 along a narrow ridge with heavy exposure on both sides.  You may choose to belay to the summit, but many parties do not. Leaving the upper belay station, follow the ridge to the summit (single 1/4 inch bolt near summit).  A single 50-meter rope is long enough to make all the rappels, but just barely.  Make sure to bring extra webbing and rappel rings in case you need to back up or replace existing anchor slings. 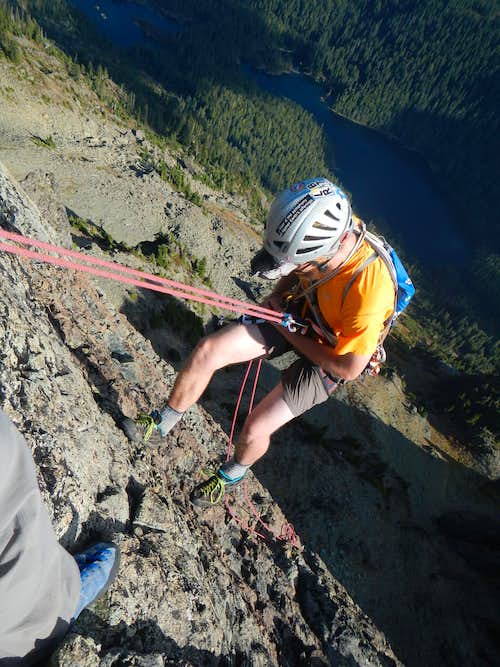 From US Highway 101 at Hoodsport, WA, turn west on Lake Cushman Rd / WA-119 N and proceed for 9.2 miles to a T intersection (Forest Rd 24).  Turn left (west) onto Forest Rd 24 and continue 6.5 miles along the north shore of Lake Cushman to the Staircase Ranger Station parking lot. 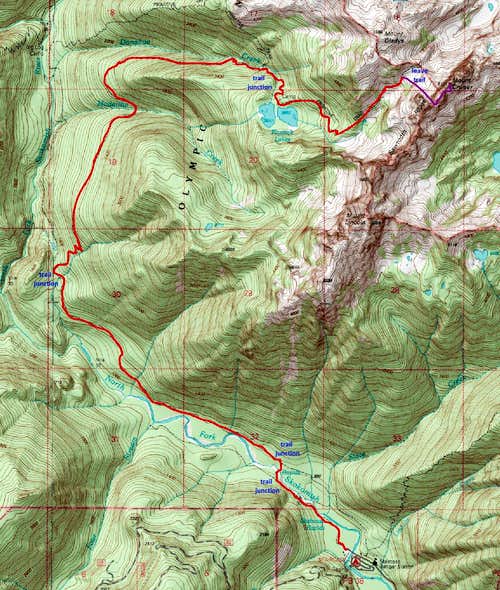 Mount Cruiser although not officially part of Olympic National Park will require permits if using any of the National Park such as trailhead, base camps, etc. This is a limited use area so reservations are a good idea, however, 50% of overnight permits are available on a first-come first-served basis. For current regulations and possible openings call Olympic National Park.

Flapjack Lakes is a limited use area so reservations are a good idea, however, there are a limited number of overnight permits available on a first-come basis. For current regulations and possible openings call Olympic National Park. 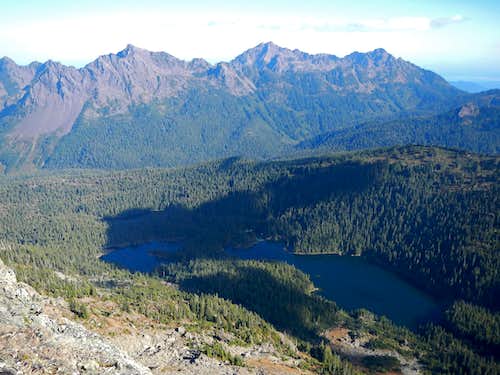 The earlier in the season the more snow to contend with, however, this may also reduce the amount of rockfall, which is plentiful on the approach. Use of helmets strongly advised.

Car camping is available near the trailhead.
Possible basecamps for Mount Cruiser include.

Climbing is dangerous. Accidents have happened on Mount Cruiser. If you choose to take your life in your own hands, then I am in no way legally or morally responsible for your injury or death. This page is for informational purposes only.