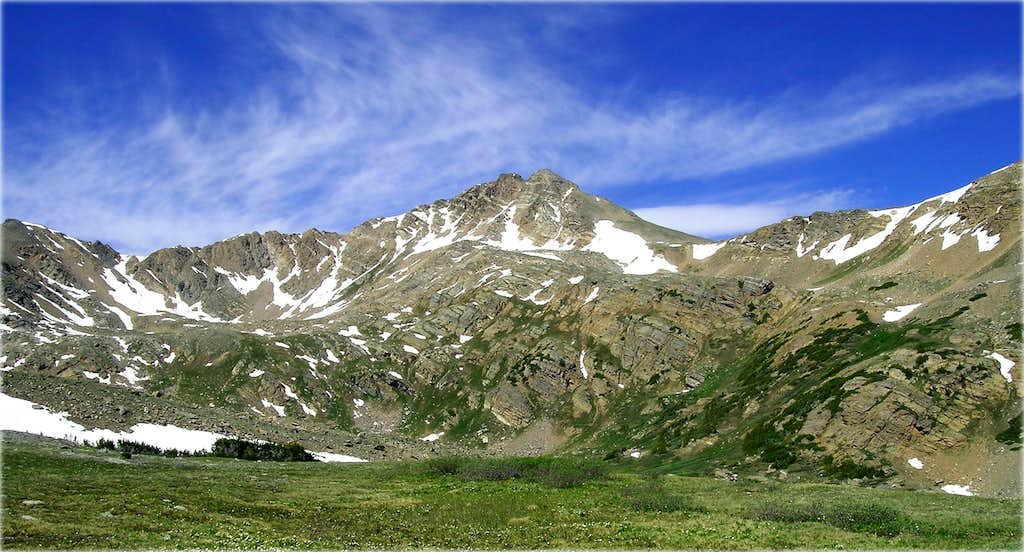 Deer Mountain-Collegiate Peaks Wilderness, Sawatch Range
Deer Mountain (13,761-ft) is not your typical central Sawatch mountain. While hiking the central Sawatch Range, discovering a common mountaineering theme is easy. Expect steep, switchback-laden lower slopes and gentle, broad ridges ascending to the summit. The Sawatch formula is typically good for about 10-12 miles and 3,700-to 4,700-ft of vertical feet of class 2 hiking on grassy lower slopes; the upper slopes expect more class 2 hiking on semi-stable talus. However, Deer Mountain has its own unique character, a more rugged character complete with a class 3 scramble on a narrow ridge with semi loose rock and a bit of exposure.

Most folks including myself discover Deer Mountain when hiking the approach on the South Slopes Route on the popular fourteener Mount Massive. In 1996, I discovered the westerly view of Deer Mountain from the Halfmoon Trail to be just the motivation to climb Colorado’s 123rd highest peak eight years later in 2004. The approach to Deer Mountain is gorgeous, and the short climb to the summit is very rewarding. I recommend this mountain to anyone looking for the following: moderate class 3 scrambling, moderate route finding difficulty, big solitude, and a better summit view than most of the fourteeners in the immediate area. 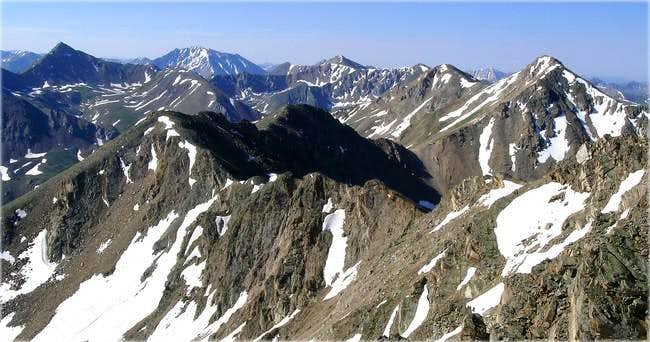 Northeast Ridge-The Northeast Ridge Route (submitted) on Deer Mountain may or may not be the standard route. Deer Mountain’s northeast ridge is very visible from the Halfmoon Creek Trail, which is the same trail that ascends Mount Massive’s alternate South Slopes Route. The route works well for folks that have a fair amount of experience on class 3 scrambling. The upper portion of the route has some loose rock and some minor exposure; however the class 3 climbing is not sustained. Deer Mountain makes for a good intro climb of class 3 terrain in a beautiful setting. The summit view is very good as well.

Northwest Ridge-I attempted the northwest ridge from Upper North Fork Lake Creek in early June and got snowed out. While surveying the northwest ridge on the topo, it looked like it would be the best route for this mountain, plus the trailhead accessibility is from a paved Hwy 82. I contacted John Prater about the northwest ridge, and while on the summit he thought it might be best route as well. During my failed attempt in June of 2004, I reached the high lake (12,378-ft) at the base of the northwest ridge and, boy…. did it look steep and loose. Maybe the snow and ice had something to do with it. Actually, just the very first few hundred yards to attain the ridge crest looked steep and loose. I will submit a photo of this spot and you can determine for yourself if it looks safe. Once on the ridge, I’m guessing the route to the summit would only be class 2+.

Extra Credit- Refer to topo map and locate the alternate “black” route down Deer Mountain. This descent route will keep you high on the south side of the basin and will take you to the unnamed lake at 11,831-ft at the base of Point 13,535-ft. The lake is obviously not a popular place to visit because of a difficult direct route from popular Halfmoon Creek Trail. But a descent from the upper North Halfmoon Basin makes it an easy, and recommended side trip. That’s all I will say about this secret hideaway.

Getting to the Halfmoon Creek Trailhead is not too difficult. It is a 9-mile excursion from the comforts of U.S. 24. It is a dirt road and is grated once a year in early June; therefore a passenger car should be o.k. The last half-mile is rough and I wouldn't attempt this section of the road in a passenger car or anything low clearance. There is a pull-off to park before the going gets rough.

Starting in Leadville Colorado, continue on U.S 24 about 3.5 miles from the center of town. You will abruptly see a turn-off on your right (west) for Colorado 300 right outside of the city limits. Turn right and go .07 miles on Colorado 300 (paved). Turn left on Lake County 11 (dirt). Go 1.8 miles and turn right on another dirt road with an obvious sign for Halfmoon Campground. Go 7 miles until you will reach the well-marked Mt. Massive Trailhead, which is also the Colorado Trail. Continue another 2 miles until the road starts to ascend a hill and abruptly gets rougher. At this point there is a turnoff on the left and this road will ascend into South Halfmoon Creek Drainage and may be a good place to park passenger cars. Four-wheel drive vehicles can go another .5 mile up the hill on FS 110 to the actual Halfmoon Creek Trailhead. This is also the trailhead for a hike to Halfmoon Lake or an alternate route up Mt. Massive's east slopes. (Statistical info from Gerry Roach's excellent Thirteener book)