Mount Terror is an aptly named summit and the highest peak of the Southern Pickets group of the North Cascades. The south side of the mountain rises 1000 feet from the upper Crescent Creek cirque, with the impressive north side rising dramatically 2500 feet from McMillan Cirque. Needless to say, this is an excellent summit, that gives the backcountry adventurer a steady dose of North Cascades alpinism. Because of the mountains remoteness and difficult approach (see below), it doesn't get climbed often. However, there are three major routes, all of which offer challenges beyond that of a normal alpine rock climb.

In the photo below, perhaps one of my favorite photos I've ever seen, Mount Terror is seen in the center; the crown jewel of the southern Pickets. It's north face staring directly at you. From left (east) to right (west) the peaks are East McMillan Spire, West McMillan Spire, Inspiration Peak, The Pyramid, Degenhardt, Mount Terror, The Rake, Twin Needles, Himmelgeisterhorn, and Ottohorn.

Being a summit in the remote Picket Range, this approach is tough. Strong parties can make the approach in one long day. It's best to reserve 2 days for the approach. Typically people approach from the Goodell Creek trailhead, which is found by turning north onto an unpaved road across highway 20 from Newhalem campground. Follow signs to the Goodell Creek campground and find a small turnout on the right just before the campground. Starting at the sobering elevation of 600 feet, hike the trail on an old forestry road bed for about 4.5 miles. Some of this is quite pretty, with moss covered ground and open forest, other spots are brushy. At the end, there is a rock cairn/arrow pointing to the hard right turn uphill to go to Terror basin. You will not head up this good looking trail, but rather continue straight on the now fainter trail, and begin winding northward alongside Terror Creek. Do your best to stay on the trail at a similar elevation before finding a good spot to cross Terror Creek. The correct route makes a descending traverse to Terror Creek where a huge logjam can be used to cross the creek.

Once across Terror Creek, begin climbing steeply up towards the Barrier. There is supposedly a trail leading up this steep, heavily forested slope and weaves around the series of cliffs that are hidden in the trees. It is in your best interest to stay on this trail. Arrive at the crest of the lower part of the Barrier at 3,800 feet, where there will be a very small saddle. Turn right and continue ascending north along the top of the Barrier (ridge walk on faint trail) until the trees thin out and you can see Stump Hollow - the large triangular sloping basin that is due east of "The Stump" (aka "The Chopping Block").

Once you break treeline, head northwest and make a leftward ascending traverse across Stump Hollow and arrive at the ridge extending southwest off of the upper part of the barrier. There is a nice camp spot on this ridge just below the Chopping Block, and Crescent Creek Basin, along with Mount Terror become visible here. Descend about 250 feet down from the crest of the ridge, and begin a long traverse across Crescent Creek Basin staying around the 5,800 foot level. Locate the excellent camp spot immediately below Mount Terror. Fit parties who are familiar with this approach can make it here in a day otherwise it may take 2, although there are no good places to camp until you reach Chopping Block Ridge, which is only 1-2 hours from the Crescent Creek Camp.

Also, the approach can also be done by hiking up the steep, but more more defined Terror Basin Trail, which departs the Goodell Creek Trail at a large cairn. This avoids the uncertainly of the bushy, and potentially epic Crescent Creek Basin approach (if you lose the trail). The downside, is once you get to treeline in Terror Basin, you will need to traverse west across Terror Basin, ascend the barrier (ideally at its lower crossing), and meet the main approach route in stump hollow.

This route is the standard route on the mountain, and involves ascending the deep gully heading to the low notch between Mount Terror, and The Rake just to the west. This gully is loose, narrow and dangerous. Once at the notch, a few pitches of easy climbing, with good, established belay/rappel anchors spaced ~25 meters apart bring you to easier terrain where the west ridge becomes a scramble. Continue up the ridge, avoiding difficulties to the right (south) side of the crest until you arrive at a steep drop leading to a small notch. This is the same notch you'd cross over if climbing one of the north face routes. Traverse a ledge around the right of this small tower, and enter a small gully. Ascend this gully until you are about 75 feet below the small notch, and finish the final 250 feet of Class 3-4 to the summit. 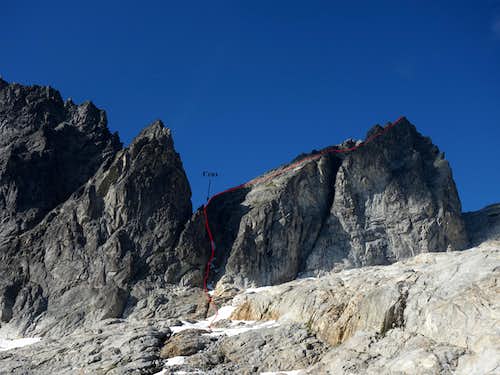 The first ascent party of Terror's north side used this route. It climbs the right (west) of two ribs in the north face, and meets up with the long snow finger on the upper face, which forms an east ramp for a good portion of the route. Approaching it is most of the work, and involved continuing beyond the Crescent Creek Basin camp, up and over the Otto-Himmel col and descends on snow below the Twin Spires, and the Rake to the base of the north face. From Crescent Creek, even the fastest parties will still need 2-3 hours to get to the base of the route. The only other way to reach the north face of Terror is via a complete north to south Pickets Traverse, involving a carry-over up and down Mount Terror. The route itself is mostly Class 3-4 with the crux being near the top of the chimney midway up the face. Crossing the moat at the base of the route could also pose difficulties. An axe and crampons (or at least microspikes) would be mandatory here, as the snow field adjacent to the north face rarely sees sun, and gets pretty icy. The photos below depict two possibilities for ascending the north buttress. The route I took is the first photo, and did not exceed Class 5.4. The right photo shows a different parties route where they encountered a 5.8 crux traverse spot near the top of the chimney. Notice they traversed further right lower on the face and climbed the lower portion of the true north buttress, which we missed by heading straight up the chimney.

Once at the top of the snow finger/ramp, the route dynamics change and you scramble a wildly exposed ridge crest, then traverse around a small tower to the notch separating the false and true summits described on the west ridge route page.

This is probably the most aesthetic route on the mountain and follows the longer, more sustained left (east) rib on the north face. See a route topo below. This is probably the least popular route on the mountain, and involves ascending the slabs to the saddle between Terror and Degenhardt, then climbing the short, but steep ridge leading directly to the summit. This route likely only gets done if a party is linking up the entire southern Pickets in one go from east to west. 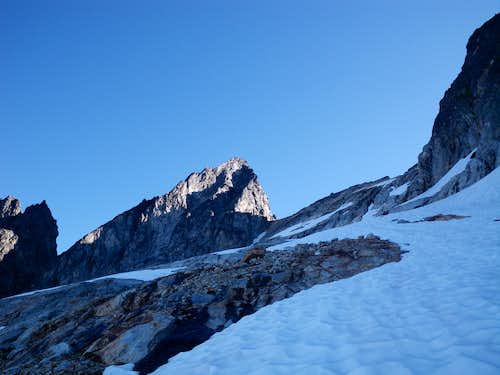 East Ridge of Terror in the sun on the ridge side

The best time to climb in the North Cascades and the Pickets range is summer, especially the month of August. By late August, most of the years temporal snow is gone. July is also good, but it is typically buggier. September is good as well but you have to be careful of fall snow, and wary of shorter daylight. The Pickets, which are already extremely difficult to access become even harder to get to in winter and early spring. November and December would probably be the worst time of year.

You will need to get a permit for Crescent Creek Basin zone (or multiple zones if doing a full Pickets traverse) from the North Cascades National Park Visitor Center in Marblemount (360-873-4500). You won't be fighting for this permit like you would for one in Boston Basin, so no need to worry about the zone being full. Camping on Chopping Block Ridge with Terror at the upper right

Shown below is a series of maps depicting the routes and approach for Mount Terror.

Pickets Range Traverse TR - My report for the full north to south Pickets Traverse I did, including the north face of Terror.