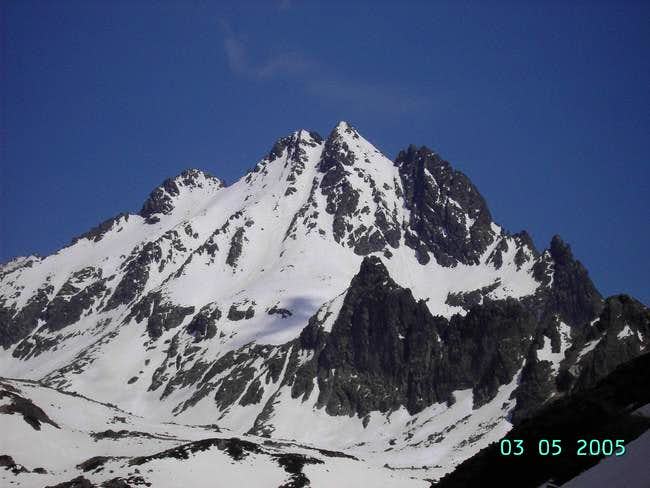 Vysoka(slov);Wysoka(pol);Tatraspitze(germ);Tatracsucs(hung) one from the most beautiful and most interesting mountains in High Tatras. Wysoka is 9th mountain by the height. It is situated in the main ridge of High Tatras mountain above "White Water" and "Menguszowencka Valley" and their upper parts. Some climbers call Wysoka " Matterhorn of Tatra Mountains'' It has two summits North-West and second South-East merely equal, separated by Pass in the Wysoka (2543 m) First time Wysoka was reached by Mor Dechy (hungarian) and guides in 1874. Next ascent was success of polish poet Adam Asnyk. Climbing Wysoka by two easiest routes is possible for experienced tourist in good conditions but there in no any marked route. Interesting routes for mountaineers are on the North face -from Ciezka Valley and East face -from Rumanowa Valley. In the begging of 20 th century passing Crown of Wysoka (Ciezki Szczyt, Two summits of Wysoka and Smoczy Szczyt pol. (Draci Stit slov.)) was popular route.

The easiest way to get there is to start from train stop "Popradske Pleso"-after 1h and 30 minutes you reach "Popradske Pleso"-the lake and mountain hotel. There are two routes 1.By Zlomiska Valley and Zlomiska Zatoka to Siarkanska Pass (Dracie Sedlo) then to the couloir which falls from the pass between two summits and left to the North-West summit. (3 hours 45 min from Popradske Pleso, 5h 15 min from the train stop) 2 By Mengusowencka Valley and Vaga(Vaha)-the pass between Rysy and Ciezki(Tazky) Szczyt. Next traverse Ciezki Szczyt and Wysoka by Pazdury, Lawica (terasse) to the mentioned great couloir.(4hours 15 min from Popradske Pleso to the top) Waga Pass can reached also from the North from Lysa Polana- polish-slovakian border by the White Water Valley and its upper Part - Ciezka Valley(Tazka V) but it is longer-7 hours to the top. According to TANAP rules to climb Wysoka you should be a member of mountaineer club which belong to UIAA, and you can use the easiest routes only for descending. Tourist have to take a guide to climb Wysoka. Slovakian guides take care of theirs interests .They even removed chains on the two easiest routes on Gerlach (the heights mountain in Tatras) to pay them for leading to it. They want to take money even from experienced mountaineers if they could. Tourist season begins 16 of Jun and ends 31of Oct. Tourist season begins 16 of Jun and ends 31of Oct. in Slovakia. In the June and July snow often lays in the great couloir -that is the reason why august and september are better time for climbing Wysoka. During winter the best access to the top is from Smocza Valley, but it depends on snow conditions 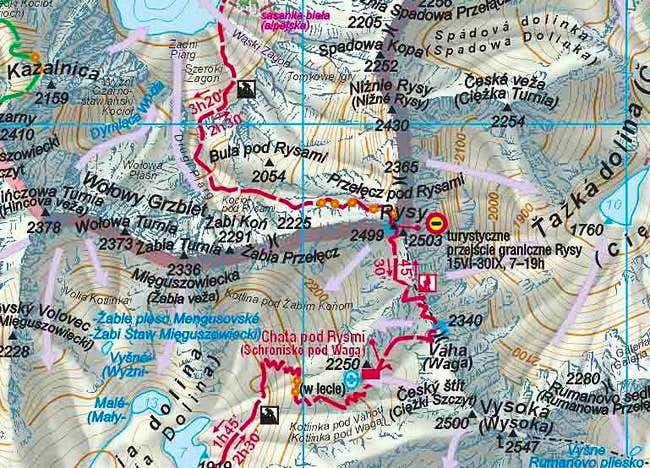