Evergreen Mountain is located north of Skykomish off of Highway 2. The summit lookout can be reached by following a ridge to the summit, making it a good winter/spring snow scramble. There is also a trail route in the summer/fall.

See the "Additions and Corrections" below for the latest road conditions.

From Seattle, follow Highway 2 east toward Stevens Pass. In Skykomish, turn north on Beckler River road, and follow it to the parking lot just before the bridge, elevation 1350'. 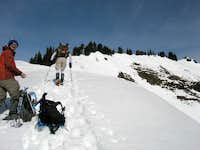 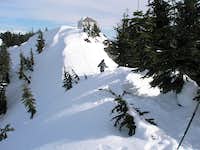 Almost There
Cross the bridge, and head up before the sign on the right. The route was flagged when we climbed it on Feb 21, 2009, and climbs through mainly open, wooded slopes. Our party used traction devices to ascend the hard snow on slopes that max out at a moderate 25-35 degrees between 2000' and 3000'.

After joining the trail at 3000', the route flattens, and becomes a scenic ridge hike most of the way to the summit.

There are two trail routes. From the "PARK" waypoint, follow FS road 6530 along the Rapid River 1.4 miles east to the trail head. The trail starts up an old logging road for the first 0.9 miles (maybe driveable, I've never been there), and joins the winter/spring ridge scramble route at waypoint "trail."

Redwic's trail route follows FS road 6550 about 5 miles north before turning right onto FS Road 6554 ("Evergreen Mountain Road"). This leads up the mountain and was washed out several years ago. From the end of that road (before the washout), the official Evergreen Mountain Trail (#1056) is only approximately 1.5 miles long each way.

We passed two folks who spent the night at the lookout. There are plenty of flatter areas as you get higher on the ridge.

I recently heard a rumor in mountaineering circles that the road in question has been repaired and that the original trail is back open to use. I have not investigated these claims. Let me know what you find out.

Thanks, Eric, I just added this info to the page overview.

FS 6550 is permanently closed near Bullbucker Creek. Access FS 6550 at Jack Pass, go downhill a short way and then turn left onto FS 6554. FS 6554 is very narrow but in good condition. Road may be gated at Evergreen Creek in early season.