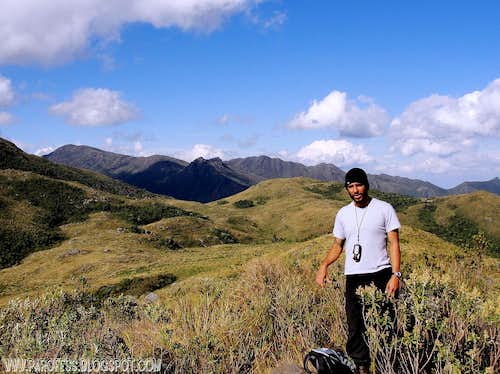 Me at the summit of Urubu Peak. 2.272m.
Urubu Peak from Itatiaia (it is important to say Itatiaia because Urubu is a very common name for mountains in Brazil) is a easy but never summited mountain inside the park. Due to too much rules determined by the park administration, from the total of around 35 peaks from Itatiaia, it is allowed to hike/ climb just a few such as Prateleiras Peak, Pedra Assentada (must ask for authorization before and to present a harness, carabiners and rope), Agulhas Negras, Pedra do Altar, Morro do Couto, Asa de Hermes and Pedra do Sino.
And even so, you must get inside the park before 9am and get out before 5pm, otherwise you'll find yourself in trouble.

The best option is to reserve the Rebouças Hut, that means you'll be inside the park to sleep and it's gonna be easy to visit other summits without any disturb what so ever.

That mountain is easy to summit, has a great view, totaly different to what people are used to see of Prateleiras Peak, the mountain changes completely from the summit of Urubu. And the landscape, fantastic...

180° of summit view to several summits of Itatiaia National Park!

From Minais Gerais/ São Paulo/ Rio de Janeiro, you have to take a bus to a little city called Itanhandú. Several bus companies can take you there. Once you get to Itanhandú, take a nother bus from the same bus station to Itamonte, a smaller town at the bottom of the Sierra.

There is the point: Once you get to Itamonte, it is hard to find transport to the park entrance. But there's some taxi drivers that know the park and can take you up to the entrance, and that's gonna cost you around R$ 100,00 (about US$ 55.00).

From the main entrance, you have to register at the military office, than you're free to get into the park from 8am to 5pm. It is important to get out at the right time to avoid problems.
Take the road directly to the shelter (Rebouças).

The rocky house. Easy to find.
From Rebouças Hut follow the road until it ends. There you'll see a big metal sign indicating the start of the traverse. Take that trail. It is wide open, you can't miss. After about 1,5 hours you'll see in front of you an old big house, that's Massena Hut that has never been used. At your right, there will be another trail, much less used. Follow that trail until you reach a smal rocky abandoned house. Now looking straight west you'll see the mountain really close. Around 1.4km on a straight line. Gon on!
From the Rebouças Hut it is a 9km round trip to the summit and back. Nice walk with fantastic views.

Remember: DO NOT camp without the proper reservatioin and only by the hut.

From november to march no cars can get inside the park because of the mating season for Flamenguinho Frog, or Melanophryniscus Moreirae

Take your garbage with you, please...

Camping inside Itatiaia National park was extremely forbidden until last month, but a few weeks ago they opened a available space beside Rebouças Hut for up to 10 tents, that's it.
But you must get in touch with the park to reserve your spot.

If you don't wanna camp, you can make a reservation to Rebouças Hut: